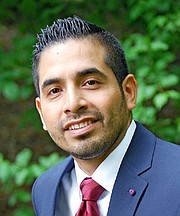 The production, at Gunston Middle School, is a revised version of the hour-long condensed opera shown to hundreds of school children in March by Opera NOVA, the volunteer-run arts organization.

Alburqueque has performed in shows from various Washington D.C. theatres, including Spanish/Latino theatre Teatro de la Luna (“Night of Boleros,” “She Returned One Night,” “Kick-Butt Women,” “Chumbale: Every Love Bird Needs a Nest”). He has a Bachelor’s degree in vocal performance from the University of Maryland.

“Directing is something I got into about four or five years ago when I was working at Teatro de la Luna for kids’ plays,” said Alburqueque. “I remember traveling from school to school in the DC area one time where the stage director couldn’t be there for one of the kids’ plays we were doing at the time. So I offered a hand at stage directing because I felt that I could add more detail to the show, which led to its success. And from then on I’ve always wanted to stage direct. “

This may be Alburqueque’s first time taking on the role as stage director for “La Cenerentola,” but will not be his first time performing in the show. The March performances allowed him to notice details he may want to add in order to create an even more in-depth experience.

“We didn’t really have a stage director per se during the first production,” said Alburqueque. “So what happened was that I began to notice that we could do just a little bit more for each scene to make it appeal even more to younger audiences, especially since Cinderella is so well-known and beloved by kids.”

To achieve his vision, Alburqueque focused on visuals, music and the emotional connection from the actors to the audience. Alburqueque weighed in on his experience as a spectator of opera to further emphasize the importance of achieving that connection.

“Sometimes operas can seem a bit repetitive with their narration, so it’s important to maintain enough visuals to capture the audience as well as have singers who can interpret a song without worrying too much about technique,” said Alburqueque. “A singer could just be standing there, singing a beautiful aria, but if the singer does not move me by channeling what they are actually saying, either through movement or expression, then I become disinterested. The singers just look like stones up there.”

“The art (opera) is about contemplating everything,” said Alburqueque. “When you’re painting a tree you’ll obviously be using green to color the leaves, but there can be a lot of green colors instead of just one. That’s what opera is. Your voice has a lot of colors to it that you can work with.”

By colors, Alburqueque refers to the variety in one’s voice. A tool Alburqueque believes all opera singers should use to their advantage.

“You can sense when you’re singing sadly. You can sense when your voice is starting to stop because you are about to cry,” said Alburqueque. “All of those little details are what make good art. I’ve seen a lot of these big opera companies bring on performers who can sing their lungs out, but I have to ask myself ‘yes you can sing, but what else?’ ‘What is the story you are telling me?”’

And creating that story audiences will love and enjoy is what Alburqueque seeks to maintain.

“The stepsisters in ‘La Cenerentola’ must recognize that they are stepsisters and Cinderella must be seen as the princess on stage. Same thing with Cinderella’s prince and the narrator of the show,”’ said Alburqueque. “If the audience see that they performed the whole role, not just by singing but by acting and interpreting the expressions of the characters, then they have conveyed the role perfectly.

“My music score is filled with stickers and post-its all over the place,” said Alburqueque, laughing to himself. “I’m really enjoying going through the music and words with the cast to try and get the ideas from my head onto the stage. These singers really love what they do and live for what they do.”

The program will be shown to the general public at 6 p.m. on Saturday, June 30. First, there will be special performances for home schoolers, summer campers, parochial, private and public school students on June 29 at 10:30 a.m. and to seniors at 2 p.m. June 29. On June 30 at 2 p.m., families of military personnel and children of imprisoned parents will see the program.

Tickets for “La Cenerentola” can be purchased online at https://www.operanova.org/upcoming-events. They will cost $6 for adults, $5 for members and seniors, $4 for children and $10 for donors. Donations to Opera NOVA are also encouraged at the door before and after every performance.