‘Plan Is Too Dense, Condos Too High’ in Fairfax City
Votes

‘Plan Is Too Dense, Condos Too High’ in Fairfax City 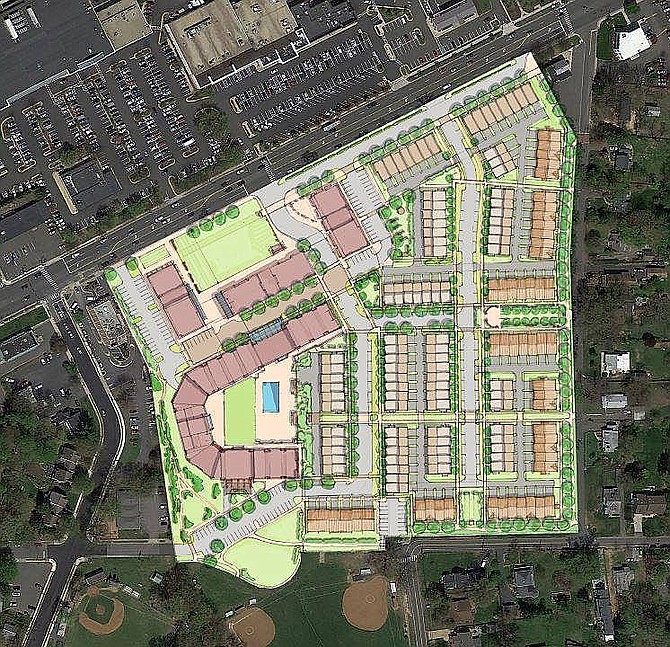 It was a public hearing, after all – and residents gave the Fairfax City Council an earful, last Tuesday, June 12, about the latest proposal for the Paul VI High School (PVI) site. More than 30 people spoke and, although several were in favor, the majority – especially those who live nearby – were against it.

“This is about protecting City neighborhoods,” said Cedar Avenue resident Ellen Brouwer. “This is infill development, and it needs to be compatible with existing neighborhoods. If we build what IDI proposes, we’ll overwhelm this little neighborhood, and the additional traffic wouldn’t benefit anyone.”

“The plan is too dense and the condos are too high,” said Keith Avenue’s Sue Cavalleri. “Vote no.”

The initial speakers, however, viewed it more favorably. “Henry Waters, a board member of American Legion Post 177, adjacent to the site, thanked IDI for working with them. “Ultimately, we believe it’s an appropriate use and a step forward for the City.”

Chris Dominic, who lives a block away, said, “I initially had a lot of concerns, but am now tremendously excited about this project. We’ve had ample opportunity for input, and I think it shows. We really don’t want by-right development on this property. This is a win, and you should take it.”

Dwight Lee Hubbard said IDI executive Enrico Cecchi worked with him and fellow alumni to preserve part of what was originally Fairfax High and is now Paul VI’s home. And Russell Clones, who lives in one of IDI’s Enclave condos, said he’s happy and satisfied with his condo and his dealings with IDI.

Ray Gerard, president of the Cobbdale Civic Assn., said his organization supports the proposal for PVI. “The IDI group has worked cooperatively with the City and residents,” he said. “The plan has been scaled back and density reduced along Cedar and McLean avenues. And it’s projected to have a positive fiscal impact [on the City].”

Speaking as president of the Fairfax Heights Civic Assn., John Norce said, “I support this project because the IDI team listened to our concerns and responded to them. This project will enhance and bring more value to our neighborhood.” And another man noted that people are needed to make a community and to shop at its businesses. So, he said, “This fish is ready to fry.”

Also pleased was Fairfax Little League President Scott Peirce. “Our biggest concern was the loss of parking at PVI, which we use for our games at Pat Rodio Park and Chilcott Stadium,” he said. “But IDI increased the parking spaces from 18 to 60.”

Douglas Stewart, with Fairfax City Citizens for Smarter Growth, said the project has a seamless trail network and is pedestrian-friendly, but the local streets should be extended. He also liked the parks IDI will add, but decried the loss of tree cover along Cedar and McLean. And while glad that some affordable, for-sale units are included, he said Fairfax needs affordable rental units, too.

Certified arborist Adam Wingo said all 353 trees there currently will all be removed and mentioned three in particular that he’d like retained. “Big trees give us a good feeling and a sense of wellbeing, plus shade,” he said.

Agreeing, Liz Welborn said, “Clearcutting all the trees is ridiculous. The ones Adam mentioned are healthy and well-worth keeping.”

Representing his Cedar Avenue neighbor, Dirk Brouwer objected to the large, tall townhomes along Cedar and McLean. “They’ll transform the neighborhood in a negative way,” he said. “We want these areas to be single-family homes. Deny permission for this development to proceed.”

Also against the high density, Cedar Avenue’s David Gesser said, “This is my front yard. This area should be developed, but correctly; vote no.”

Similarly, Joyce Cusack of Keith Avenue said, “We’re not opposed to respectful growth, but this plan takes away our neighborhood character and green buffer. Our neighborhood will suffer from increased traffic.”

Cedar Avenue’s Brian Cute, president of the Historic Fairfax Neighborhood Assn. (HFNA), said his organization believes the PVI development should be compatible with the existing neighborhood and have a “real transition” between them. He, too, urged the Council to vote against the proposal. And neighbor Michael Caldwell said there’s nowhere else for the project’s new residents to park, once their spots fill up, so he worried they might spill over onto his street.

Cynthia Cute said the City’s being “threatened by a greedy developer looking to line his pockets at our expense. He’ll leave, and we’ll be left with it. The two lots at the end of Cedar are part of our residential neighborhood. They should remain single-family to protect our neighborhood and create a transition. Cedar Avenue is a funnel in this community, and this development would increase traffic and destroy our historic community.”

However, Sager Avenue’s Jim Engelhardt said, “This could be a forward-looking project and a win for the City. IDI did 19 revisions, and development in Fairfax needs to happen. This looks visually pleasing and could be a nice development for this community; I hope you vote yes.”

But Farook Fahati and Darryl McDaniel both had traffic concerns and asked the Council to put the project on hold for further revisions, as did Julie Knight, who objected to its density. Laurie Malinowski said the plan “ruins the hometown feel,” and Veronica Simpkins had the same worry.

Joe Belson said the tree removal would lead to flooding, and Douglas Simpkins said the concrete box culvert would cause the water to rush onto Center Street, where he lives. Saying there’s not enough parking, Malcolm Mercer urged the Council to “keep it a City that’s small, nice and has lots of trees.”

Meanwhile, Serena Mercer said IDI’s planned workforce housing “isn’t serving the people with lower incomes who need housing that’s affordable to them. We have a moral responsibility to stand up for these people.” Yet Rick Dickson supported the overall application, saying, “Nobody’s going to like everything.”

Afterward, Cecchi said IDI “engaged in good faith with every member of the community.” Then Councilman Jeff Greenfield made a motion to keep open the public hearing and defer decision to July 24. “We’re closer together than we are further apart,” he said. “This will allow us more time to compromise and try to figure this out.”

But Councilwoman Jennifer Passey said July wasn’t enough time for the two, new Council members who’ll be sworn in on June 29 to “get up to speed on this proposal.” Greenfield then suggested Sept. 11, instead, and the Council agreed.