Reston Association estimates it will be at least a month before tree cleanup is completed. 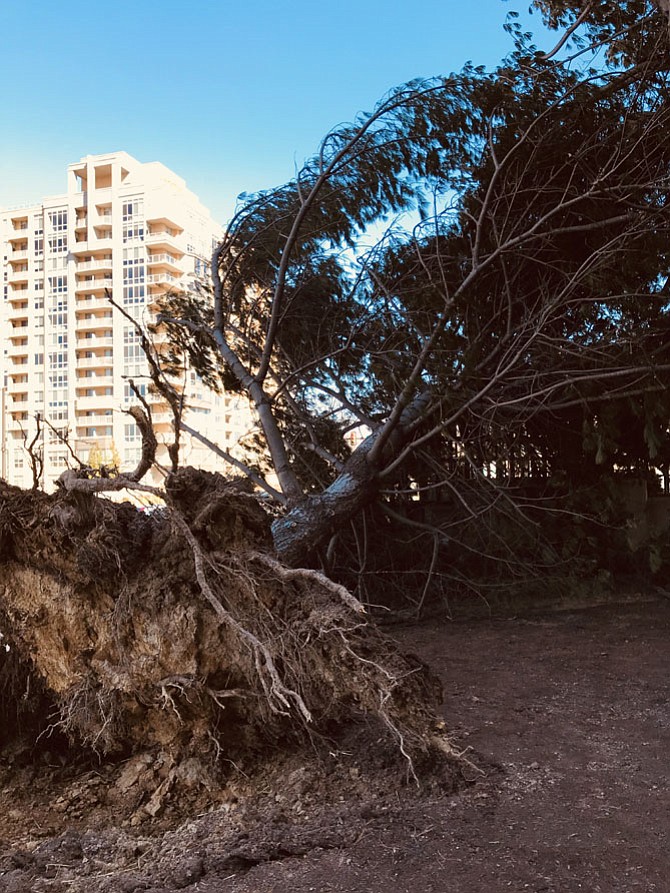 The powerful winds of Winter Storm Riley ripped the roots of a massive pine tree out of the ground, crashing it onto the Reston Town Center sign at the corner of New Dominion Parkway and Temporary Road in Reston. Central Services Facility estimates it will be at least a month before tree cleanup throughout Reston is completed. Photo by Mercia Hobson.

The sustained wind storm downed trees and power lines in the Reston area and beyond, leaving 192,000 Dominion customers, the majority of them in Fairfax County, without power. Four days after the storm began, a reported 400 Reston customers remained without power as around the clock restoration work continued.

Customers could track efforts to restore power online in real time by launching an interactive map on the Dominion Energy website, www.dom.com and zoom in on a specific area. In doing so, they would be able to see how many people were affected and an estimated time for when power would be restored.

On Twitter, Dominion Energy VA wrote: "We estimate that we’ll have the vast majority of you restored by the end of the day Monday, with completion for everyone expected by Tuesday. Our commitment is to get life back to normal for you as safely and quickly as we can."

Reston Association (RA) reminded people on their website that the Association's Central Services Facility (CFS) employees were working to remove trees that fell during the windstorm and that priority would be given to trees that downed on roadways and pathways. RA crews were also dealing first with any trees that were hanging or might be a safety hazard.

RA wrote: "Members who have had trees fall on their private property can report the incidents to their insurance companies or private tree removal services. RA is only responsible for downed trees in common areas."

"CSF workers estimate that it will be at least a month before (tree) cleanup from the storm will be completed. For emergency situations involving downed or hanging trees on RA property, call CSF at 703-437-7658.”