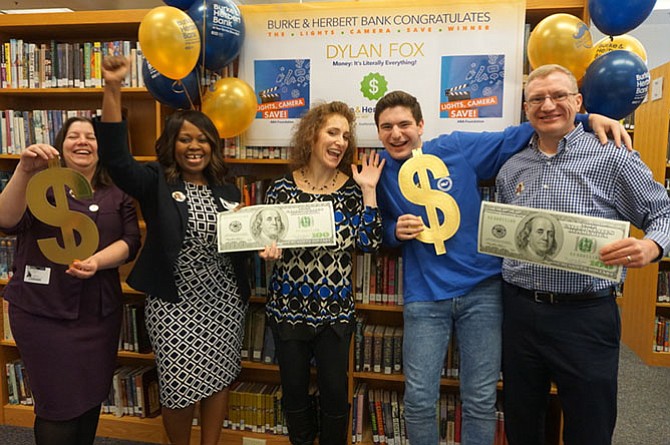 In recognition of America Saves Week, the American Bankers Association Foundation announced the three national winners for its 2017-2018 Lights, Camera, Save! video contest. The winning videos were revealed through a live broadcast on the association’s YouTube channel.

The judging panel, which consisted of personal finance and communications experts, awarded Dylan Fox of Springfield, the grand prize for his video, “Money: It’s Literally Everything.” Fox was named a national finalist after winning the local contest at Burke & Herbert Bank in Alexandria.

“Through original lyrics and music, Dylan successfully highlights the value of saving and smart money management,” said Corey Carlisle, executive director of the ABA Foundation. “His video will be a fantastic tool in inspiring other students to make saving a priority.”

“We are thrilled for Dylan and are proud to be a part of this major accomplishment. His song is so catchy it stays with you long after the 90 second video ends,” said Terry Cole, executive vice president, Burke & Herbert Bank. “Burke & Herbert Bank is a strong advocate for developing financial literacy among the next generation of banking consumers so our involvement in the ‘Lights, Camera, Save’ program is a natural extension of our ongoing work.”

This was Fox’s second time as a Lights, Camera, Save! finalist. In 2017, his film “$ave Your Future!” was in the top five and featured in the “Savers’ Choice” social media contest. Ultimately, Fox won the social media contest and received a GoPro to encourage future filmmaking.