How To Prevent Gun Violence
Votes

How To Prevent Gun Violence 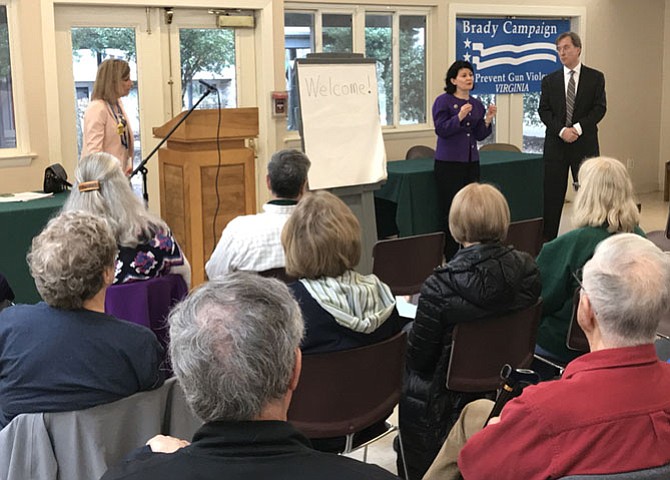 People — some of them coming from as far away as Maryland and Arlington — filled the parish hall of St Aidan’s Episcopal Church to capacity on Sunday, Feb. 25 to find out ways they can take action to help prevent mass shootings and reduce the nation’s gun violence.

Members of the Northern Virginia Chapter of the Brady Campaign to Prevent Gun Violence handed out a two-page flyer with five actions for aspiring advocates, including lobbying their elected representatives, making sure their children aren’t visiting homes with unsecured guns, attending the monthly NRA protest/vigil and participating in the March for Our Lives in Washington, D.C. on March 24.

“These three policy objectives will help keep dangerous weapons out of the hands of people who should not have them,” Leinz said. “Congress must pass these laws to keep our children safe.”

Turning to state legislation, state Sen. Barbara Favola (D-31) and Del. Paul Krizek (D-44) were on hand to describe another disappointing year in Richmond for supporters of common sense gun legislation. Nevertheless, the two legislators were united in their one central message for the audience:

For Father John Baker, Senior Pastor at St Aidan’s, the struggle to enact sane, sensible gun laws is a moral one, and it is time — way past time — for the church to step up and join the fight.

“We worry about being political, and we worry about whom we might offend, and we soften our tone and seek conciliatory words with those who see this issue from another angle,” he said. “And we end up doing nothing. Again.”