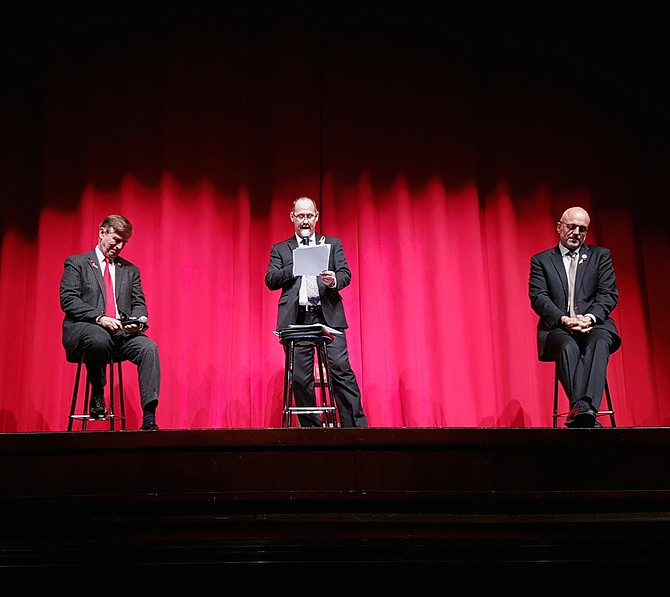 When Fred Guttenberg thinks back to this past Valentine’s Day, he says he remembered the frantic rush to try and get everyone out the door. Guttenberg said he remembered trying to tend to the dog and get everyone’s lunches packed. What he can’t remember is, in all the rush, whether he told his 14-year-old daughter Jamie he loved her before she left. Later that day, she would be one of 17 students murdered in a mass shooting at Stoneman Douglas High School.

On March 7, Guttenberg joined U.S. Rep. Don Beyer and U.S. Rep. Ted Deutch of Florida for a discussion at T.C. Williams High School in a town hall about gun reform.

The auditorium was packed, but the room was silent as Guttenberg described his daughter.

“My daughter Jamie was murdered, or as some in the pro-gun community like to say…my daughter was hunted,” said Guttenberg. “My daughter was the toughest person I know. She fought for her life until the very last second; running down the hall from an active shooter until a single shot to her back severed her spinal cord.”

Guttenberg, along with both members of Congress, said he believes in the second amendment, but argued that it shouldn’t be used to curtail all gun reform.

“I believe in second amendment, just not bastardized version expressed by gun lobby and those who follow them,” said Guttenberg. “This version has led to these weapons of war being widely available. As a result, my daughter has been murdered. …We cannot allow a gun lobby that believes in no limits.”

Guttenberg said the next step is to pierce the aura of strength and take away the funding from the gun lobbies. It was noted on stage that Florida passed some small gun control measures after the shooting. Guttenberg said it was a good first step.

“Every gun owner should have to register, license, and insure every gun that they buy,” said Guttenberg. “We should make sure process of gun takes on same responsibility as everything we do, [like] driving a car or picking up a prescription.”

The second half of the evening included questions and testimonials, all of whom expressed favor for gun control measures. Several students in attendance had either carried out or were in the middle of planning walkouts in solidarity with the students in Parkland. Naomi Wadler, a student at George Mason Elementary, helped organize her classmates’ walkout for school on March 14.

“I hope that when I’m older, in middle school and high school, I won’t have to worry about going to school and getting shot in my classroom,” said Wadler.

Henry Gibbs, also from George Mason Elementary, said that the day after shooting he was watching the news about it on TV.

“When I heard about the shooting, what was going on in my mind was ‘Again?’ This has been going on all across the country. It’s the magazines and bump stocks that allow him to fire off so many rounds. I think it’s crazy that you can go into a store and buy things that can kill many people. I think it’s wrong.”

Several of the students noted that the school administrations had taken significant steps towards trying to prevent schools from organizing walkouts. Beyer pointed out into the crowd to school board members and said they were here now, listening.

“One of the things I’ll tell you as an older person,” said Beyer, “when you get to be our age, you won’t remember an hour of instructional thing you missed, but you’ll always remember walking out.”