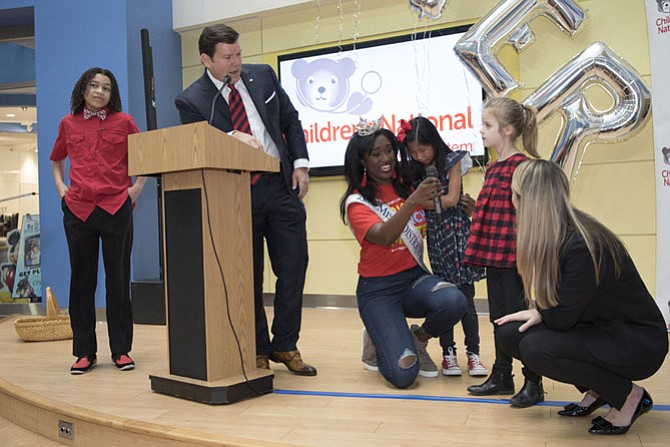 “This is the most well-organized campaign that we have ever been invited to participate in.” — Cary Kelly, owner of The Cookery

The campaign, called Make March Matter, seeks to raise $1 million for CNHS’s Fund for Every Child, which helps every child receive the best quality care regardless of their background, financial standing or whether or not their families have health insurance.

“The campaign started out in Los Angeles in 2016 for the Children’s Hospital of Los Angeles,” said Tracy Jones, director of Children’s National Health System Hospitals. “Children’s National Health System Hospitals out there wanted to pick a month to rally around pediatric health. After they had two successful years, we started having conversations about bringing the campaign to Washington D.C. We started planning for it back in June, and the campaign quickly gained so much momentum.”

Jones’ team hit the ground running, going door-to-door to get local businesses on board as partners. As partners, these shops and restaurants would hold special promotions or events for proceeds to go toward the D.C. Make March Matter campaign.

“Our goal starting out was 55 partners,” Jones said. “Some of our long-standing partners were the first to come on board with this campaign, but we also did a lot of cold calling, and got our feet on the street. We spent days talking to managers and employees, getting people excited about the cause. The result is that 75 percent of Make March Matter partners are partners new to Children’s National Health System. Among 150 partners, there are more than 700 locations across the greater Washington D.C. area that are participating. When we said we wanted to make March matter, the community stood up and said, ‘We do too; we want to make March matter.’”

One such partner is Arlington’s Don Tito, a restaurant and bar at 3165 Wilson Blvd. On Monday, March 26, Don Tito hosted a special event to contribute to the cause.

The entire Don Tito team was excited help make March Matter upon learning about this opportunity. “A member of the Make March Matter team approached us to host a happy hour fundraiser and we were excited to get involved,” Dingman said. “We consider ourselves as strong supporters of local and national charities. If we are given the opportunity to help support a cause that we believe in, we're always happy to help.”

Arlington restaurant, The Cookery at 4017 Campbell Ave. in Shirlington, also became a Make March Matter partner following a history of contributing to other fundraisers for Children’s National Health System.

“This is the most well-organized campaign that we have ever been invited to participate in,” said Cary Kelly, owner of The Cookery. “The ambassadors who delivered our materials are informed and passionate. Our way of helping this cause was easy for us to implement and, most important, it’s such a clever way to engage our customers about the important work of Children’s National. The reputation of Children’s National Health System is so great that people seem grateful for the opportunity to support.”

The Cookery team’s goal is to raise $1,500 for D.C.’s inaugural Make March Matter Campaign through their initiative, which lasts the entire month of March.

“We invite our customers to make a donation by ‘purchasing’ a Dr. Bear badge,” Kelly said. “Both our D.C. and Arlington locations are participating. Children love participating and seeing their names on the bear that we hang on the front of our cash counter. Most people are aware of Children’s National Health System, but not all, so the excellent supporting materials help my staff to tell the story.”

Partners like Don Tito and The Cookery will help Children’s National Health System Hospitals in their goals to expand this campaign in the future.

“We are the first hospital outside Los Angeles to get on board and launch our own Make March Matter Campaign,” Jones said. “We’re hoping to make it a national movement. We gave businesses information to help them brainstorm fundraising ideas but they came up with their own deals. We’ve seen so many creative ideas. Everyone is doing something different but all of it is great. We will take donations all year, but the campaign does officially wrap up on March 31. Then we will start planning right away for Make March Matter 2019. Based on what we’re seeing so far, we’re anticipating great success.”

For a full list of businesses participating in Make March Matter, visit https://childrensnational.org/giving/makemarchmatter.