Robinson Teacher Celebrates Birthday with a Cause
Votes

Robinson Teacher Celebrates Birthday with a Cause 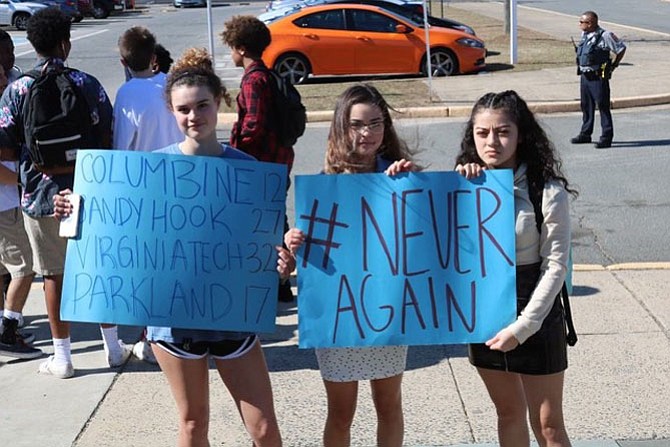 Students during a walkout. Photo by Kennya Perez Paz 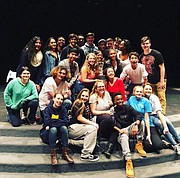 The day after Valentine’s was unusually silent. At Robinson Secondary School, drama teacher Megan Thrift was accustomed to walking into a boisterous classroom filled with raucous voices and energetic teenagers.

The more Thrift inquired about the stillness, the more she understood. Earlier, tweets among Robinson students had called for a day of silence in remembrance of those students killed in the Florida shooting.

“These kids really wanted to observe that,” she said. “They needed not to talk about it for a little bit. I think they needed not to hear about it or have people discuss it or have it be around them or for whatever reason, feel guilty they were doing something else. And not thinking about it.”

“The whole feeling of the school that day was different,” she said. Robinson Secondary School, one of biggest secondary schools in Virginia, has 4,004 students in grades 7-12. “It was a day for kids to resonate and ruminate.”

FOR 90 MINUTES THAT DAY, she said her students were tirelessly silent, all participating in quiet activities using playwriting prompts.

When Thrift got home, she needed an emotional outlet too.

For Thrift, the recent school shooting was very personal. Members of her family are teachers, either in profession or spirit, and her husband is a teacher. Since attending Westfield High School in her youth, she’s always wanted to be a teacher.

“There are very few rooms and places in high school where kids get to be themselves and feel safe to do that and grow as people at the same time,” she says about teaching drama.

Following the recent mass shooting in Florida, Thrift decided in exchange for gifts on her birthday in February, she was going to ask for donations to Everytown for Gun Safety. She began her fundraiser on Facebook, where it’s raising one dollar for each Robinson student.

“My students were filled with a mix of fear, sadness, anger, and anxiety after the atrocities that occurred at Marjory Stoneman Douglas High School in Parkland, Florida. They wrote their representatives. Let their voices be heard,” she writes on her fundraiser page.

“There’s so much money making so many decisions that money shouldn’t be making,” she said. “We have to bring the human aspect back to awareness and back to politics. We have so many incredible kids here that recognize that and are educating and communicating with each other about that.”

Students wonder if lockdown drills need to happen in hallways, the cafeteria or on the field. Students contemplate ways to escape from a potential shooter. Should they hide on toilet seats or use it as a weapon? Zig zag or just run? One student asked Thrift if she would stand between them and a shooter.

“And I was like, of course I would, without thinking about it,” she said. “It’s an ugly image. The fact that we have to think and talk about this.”

THRIFT, a “Fairfax county public school kid” who also graduated from George Mason University with a bachelor’s in Theatre and a master’s in Education, said she never experienced what her students are experiencing and it’s heartbreaking.

But they’re also informing themselves on issues by researching and joining youth groups.

“They’re knowledgeable enough and they’re filled with enough potential and boy, do they have the manpower,” she said. “These kids do feel empowered and a lot of it has to do with Robinson. I think it’s a wonderful place to learn and teach.

“I think other kids’ voices being heard [from the #NeverAgain movement] and experiencing the effect of listening to each other and seeing it truly catch on as a movement, now [students] feel like, we’re not just a kid, we’re not just powerless,” said Thrift. “We have a voice. We were born and raised in the generation of connecting people and voices, even if it was through a screen.”

As for arming teachers in school, Thrift said, “Not having a gun in a school, ever, is a good choice.

“What I don’t want for my students is for them to be known as the generation of mass shootings,” she said. “They are so filled with so much potential that to label them as that does the world a disservice.”