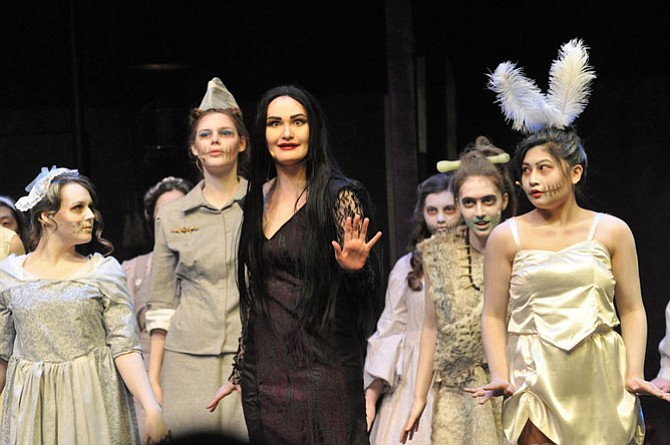 When you're an Addams, you need to have a lot of talent. Or so it would seem, after watching Bishop Ireton HIgh School's production of “The Addams Family” on March 10.

Written by Andrew Lippa, Marshall Brickman, and Rick Elice in 2010, this Tony-nominated show follows the iconic Addams family as a grown up Wednesday falls in love with sweet, boy-next-door Lucas — an absolute nightmare for Gomez and Morticia (and not the good kind)! Uncle Fester plots to help Wednesday and Lucas by calling on the family's ancestors, making for a wild family reunion.

Overall the show was positively horrifying! The ancestors were stunning as an ensemble, each displaying their own individual character when dancing and reacting to the Addams' onstage antics. Gabby Baniqued, who choreographed the show and played a convincing Saloon Girl ancestor, dazzled with both expression and clean dancing. In addition, in Abigail Abraham's performance as Alice Beineke, she was able to show off her beautiful vocals, and her portrayal of quirky suburban mother and poet was delightful. Mal Beineke, portrayed by Kevin McNerney, demonstrated immense energy and consistent character choices throughout the production.

One of the most powerful performances was by Olivia Hayes as Morticia. Her mannerisms and voice brought the seductive, stern character to life. Her performance was convincing, and numbers such as "Just Around the Corner" showed off her humorous side as well. Jake Carlo as Gomez also put on an impressive performance, facing the challenge of having an accent, with aplomb. Dagny Scannell wowed the audience with her beautiful soprano, tackling difficult songs such as "Pulled" with apparent ease. Her song "Crazier Than You," performed with Andrew Holland as Lucas, showed off the chemistry between the two. The relationship between Wednesday and Gomez, too, was very well-acted and heartwarming, as their father-daughter relationship developed throughout the show.

Libby York as Pugsley Addams put on a spectacular performance both vocally and in terms of acting, especially during the song "What If." Nick Ward as Uncle Fester had the audience screaming — with laughter, of course!

Technically, the show was also highly impressive. The incredible, two-story set was well-detailed, perfectly capturing the macabre nature of the Addams family. The revolving platforms and working chandelier stood out in particular. The brilliant costumes team created wonderful costume pieces for each character, with painstaking attention to detail, which reflected their unique personalities. Morticia's long dress was a nostalgic recreation of the memorable character's look, while its transformation into a dress more suited for a tango during "Tango de Amor," allowed the students to add their own personal flair to the show.

With a scarily talented collection of actors and crew members, Bishop Ireton's production of “The Addams Family” had audience members rising from their graves!