Local religious charities strain to help thousands of households get by. 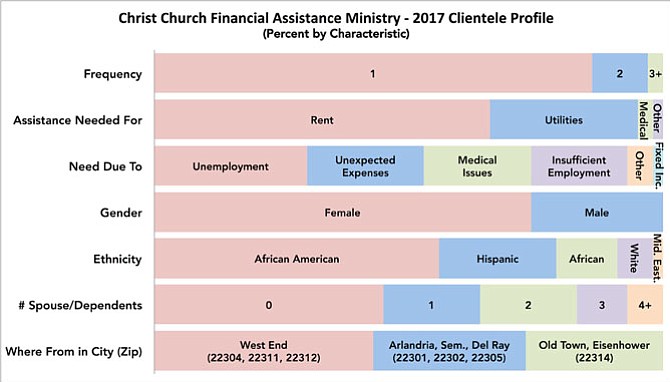 Christ Church is the hub of a financial assistance ministry network that includes 12 local religious congregations and nonprofits. Of its partners, Christ Church keeps some of the most granular data, providing a snapshot of households struggling to make it in Alexandria.

Twelve local religious institutions provided an estimated $1 million in financial assistances to over 5,000 struggling households in 2017, yet attest to a greater need than they can meet.

“I think we make assumptions that these people just come to us repeatedly [and] get used to us being a source of their income. And that’s just not true,” said Gray. In making the providers’ data public, she hopes people will “change their views of the poor and people in need, and become part of this. Most people do not want to be in this situation. All the myths, I get dispelled every week. The human being in this can get lost.”

She says people come to fill a gap: a “medical emergency, car issue, a death, hours cut back. … Usually we’re dealing with emergencies. … If you’re an Uber driver and your car breaks down, your whole world has just ended.”

Diane Charles, director of ALIVE, said in an email that she hopes the public will “be aware that the city is not able to help everyone who needs assistance.” She also hopes “to build a picture that Alexandria should be focusing on how to increase the amount of affordable housing so that people don’t have to seek assistance in order to live here.”

“We all have to turn away people,” said Gray. Each week, Christ Church can provide counselors and assistance to about 15 people, but has to turn away about 9-12 people.

The providers cross-talk and pool resources, and also maintain working relationships with utilities and public agencies. They help negotiate bills, debts, repayment plans to prevent evictions. Through a separate ministry, contributors have provided $100,000 over 2 years to assist 22 refugee families in Alexandria that previously came through Lazarus ministry. And in 2017 Christ Church’s food pantry served over 2,000 guests with a total of nearly 5,700 people in their families — an additional $10,000 in assistance.

The providers have seen an uptick in tenants needing help with late fees, especially from the Alexandria Redevelopment and Housing Authority (ARHA), an independent agency that administers public housing locally.

“Early last summer, all of the providers started seeing this trend in [ARHA tenants] coming to us with late fees dating back to 2014,” said Gray. “These late fees were not only super confusing to the residents, but also greatly in question … We couldn’t get a paper trail from them to show what had happened. … [ARHA’s] frontline staff, we really enjoy working with and we collaborate with quite well. It’s just when there are questions of accounting, that’s where our problems have been.”

Dipti Pidikiti-Smith of Legal Services of Northern Virginia, a nonprofit law firm, to whom Gray sometimes refers clients, put the issue to ARHA’s board of commissioners in November. To illustrate, Pidikiti-Smith addressed the case of Lolita Crowder, a public housing tenant evicted in October. The rent on Crowder’s unit was $1,141, of which she was responsible for a fraction that varied with her income. For missed payments, ARHA regularly charged a late fee of $114 — 10 percent of the total — according to an ARHA tenant account history generated in September. In several instances, this amounted to nearly double the missed payment — for Crowder, one month’s rent turned into three.

By ARHA’s reckoning, Crowder owed about $8,200; by Pidikiti-Smith’s reckoning, about $4,900, including late fees calculated at the lower rate.

The U.S. Code requires that public housing leases “do not contain unreasonable terms and conditions.” Pidikiti-Smith thinks calculating late fees based on total rent is unreasonable. She cited a HUD regulation stating that a Section 8 voucher holder “is not responsible for paying the portion of rent to [a private landlord] covered by the [ housing authority] …” She also furnished the commissioners with several records indicating that ARHA had determined other tenants’ late fees using the lesser calculation.

ARHA CEO Keith Pettigrew said in December: “There’s nothing in the regs that say that [ARHA’s practice is] illegal or that that’s wrong; it doesn’t say that at all. … For them to say that it’s unreasonable, I don’t understand that at all, because if you pay your rent you wouldn’t have to worry about it.”

Crowder missed a July court date; the court issued a default judgment in ARHA’s favor. On Sept. 28, the court ratified a repayment agreement between Crowder and ARHA: nearly $5,200 no later than Oct. 16, and then $3,000 in late fees by a plan subsequently to be worked out. Crowder says a family member loaned her the money for the first installment. But she missed the deadline by a few days, said Pidikiti-Smith. ARHA didn’t take the money; Crowder was evicted. She bounced around staying with family, as far away as Woodbridge, though her children went to school in Alexandria. Her belongings went into storage (for $190 per month, if they remained there past December).

Though she admitted to owing back rent, Crowder maintained in December that ARHA had wrongly calculated her late fees. She also said that ARHA staff were generally uncommunicative leading up to her eviction, in some cases not responding, or taking weeks to respond, to calls and emails.

Pidikiti-Smith thinks ARHA should have a standard operating procedure that “triggers a step of assistance” to resolve tenant debts earlier. In Crowder’s case, “they just sort of sat on it and let it balloon.”

“Contrary to what has been portrayed, this case is not merely about the amount of late fees charged by ARHA but more importantly, the arrearage,” ARHA’s administration told Pidikiti-Smith in an email.

Gray says she’s seen changes in the private rental market, too: “Landlords are less forgiving, as bigger companies buy these properties, that we used to be able to negotiate with, we can’t anymore. ... So therefore we’re looking at more late fees than we’ve ever seen. And much swifter moves to [initiate] eviction [proceedings].”