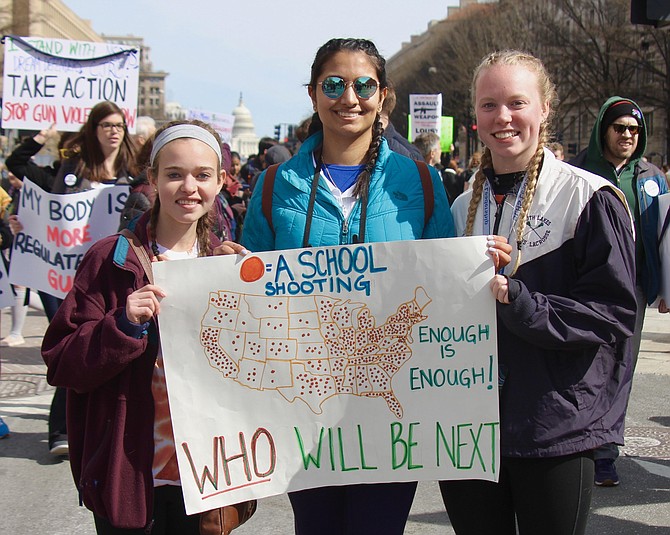 (From left) Jesse Lynch of Herndon; and Juhi Chandrabhatla and Samantha Lowe, both of Reston. Photo by Bill Bronrott 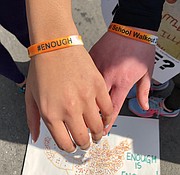 Juhi Chandrabhatla and Samantha Lowe display a wristband that South Lakes High School students have worn since the student walkout on March 14 that marked one month after the deadly shooting rampage at Marjory Stoneman Douglas High School in Florida.

In response to school shootings and gun violence, South Lakes High School seniors held a voter registration drive in their U.S. History class earlier this month. Three students — Jesse Lynch of Herndon; and Juhi Chandrabhatla and Samantha Lowe, both of Reston — registered along with many of their classmates. They will turn 18 before November, and look forward to voting for the first time this Election Day. Here is what they said, participating in March for Our Lives in Washington, D.C. on Saturday:

Samantha Lowe: “It shouldn’t have taken what happened in Florida to make the changes we are calling for. Change has to happen now. I registered to vote, and I’ll be voting for the first time in November.”

Juhi Chandrabhatla: “Marching today shows that we’ve solidified the movement, and now our politicians will know we are serious. It’s not about political parties. It’s about making change. Until now, nothing has changed. After today, we will be calling our elected officials, and send out messages on social media. We are going to make sure our friends vote in November.”

Jesse Lynch: Our school recently had a lockdown. Possibly someone with a gun. It turned out to be a false alarm, but it was scary to think that it could happen to you. We should look to other countries that don’t have as much gun violence. But, that’s not what we are doing. In South Africa, youth protests against Apartheid made a difference. Our voices are going to make a difference on guns.”