Michael McCabe, 16, points to the ‘great examples of kids in Parkland.’ 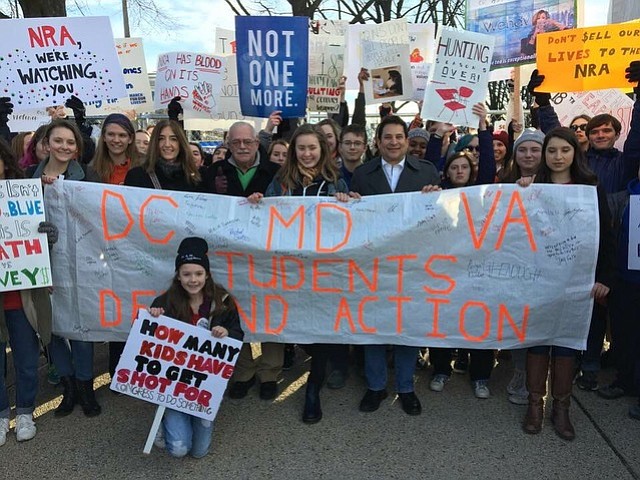 “I’ve been astounded by the emotion and unedited, unabridged truth and the stories that have been coming out in the wake of Parkland and all the media attention.” —Robinson sophomore Michael McCabe, 16 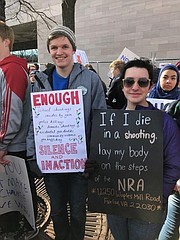 Michael McCabe and Abigail Clark at the ‘March for Our Lives.’

Before the Parkland teens rose up to speak out against gun violence in the aftermath of the Stoneman Douglas school shooting, Robinson Secondary School sophomore student Michael McCabe observed that students who wanted to make a change “were lost in the noise” and didn’t know how to do it.

But since then, “we have had great examples of kids in Parkland that have been uplifted by other examples, like the urban communities affected by gun violence,” said McCabe, 16. “There’s a lot more visibility of activists working past the apathy and misunderstanding and paralysis and have been doing important work.

“Now kids realize they can reach out to people and there are events, movements, organizations and volunteer opportunities. This has been an awakening in that sense,” he said.

AFTER THE MARCH For Our Lives, which took place this past Saturday, McCabe said the sentiment among classmates is: “We’re not going to let this go away. A lot of us are really fired up,” he said.

McCabe was born in Northern Virginia and moved to Fairfax in second grade. Since he can remember, he’s always tried to stay engaged and educated.

“I’ve always been an avid reader of the news and have had my own political opinions from a pretty young age,” he said. When he was seven years old, he recalls making signs and cookies for Obama’s campaign volunteers and watching the inauguration. At 11 years old, he joined his grandmother, also an activist, to Richmond for the lobby days.

“I always remember coming home from those [trips] thinking things through and wondering, what else can we lobby for, how does this issue affect me? It got me thinking about the issue of gun violence,” he said.

Fast forward to the recent march on gun violence, which McCabe attended with 150 others from Robinson, including those from the group “Students Demand Action” which he is a member, and he is hopeful and emboldened.

“I wasn’t sure what to expect going in [to the march],” he said. But “I’ve been astounded by the emotion and unedited, unabridged truth and the stories that have been coming out in the wake of Parkland and all the media attention. I knew this would be a wildly successful and meaningful event.”

THE MOST INSPIRING PART of the march for McCabe was seeing Naomi Wadler on stage. Wadler, an Alexandria fifth grader who represents African American girls, spoke at the march about those suffering from gun violence.

McCabe had met her before the march, describing her as “very self-confident and well spoken for an 11-year-old.”

“I had no idea she was going to be on stage. I was blown away by her speech,” he said. “The fact that Naomi Wadler was up there and she was affected by gun violence, it’s incredible that they’re in elementary school and they’re doing this. That was my favorite part of the whole event.”

He found the march’s message promising, too.

“I was blown away by the intersectionality and the extent to which they were able to uplift the voices of people who had been affected by different forms of gun violence and really convey a broader scope of the issue. I thought that was really neat to see.”

Although the conversation around gun violence has been happening for some time, he said he was struck by how well rounded the speakers were and how well the tone was carried.

“It took a really solid balance between the tragedy and the conversation and the media hubbub, and the broader scope of the issues.”

What’s next for the movement? “It goes back to lawmakers,” he said.