Face of America: Biking through Potomac on journey to Gettysburg
Votes

Face of America: Biking through Potomac on journey to Gettysburg 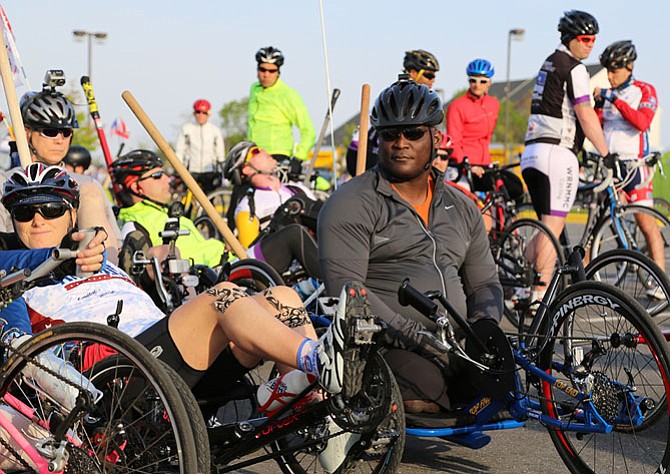 A sea of riders pushed slowly through the Avenel subdivision with a stop at the Avenel Park for food and water as part of the World T.E.A.M. Face of America 110 mile, two-day journey.

A sea of riders pushed slowly through the Avenel subdivision with a stop at the Avenel Park for food and water. The 600-strong group was thrilled to be a part of making a difference for the military — bikers waved American flags and teams of riders were sporting the red, white and blue. At least 100 or more riders were cycling using hand-bikes or recumbent bicycles.

The World T.E.A.M Face of America ride left the Pentagon in Arlington early on Saturday, April 28 for a 110 mile, two-day journey through the hills of Maryland and Pennsylvania to Gettysburg, Pa. They were joined in Gettysburg by another group of riders making their way south from Valley Forge, Pa. The annual Face of America ride celebrates the American Spirit and honors disabled and able-bodied military — both veterans and active duty.

Michael Cotts, a retired military veteran, summed up the ride, “This ride saved my life. I have PTSD — and I was so thrilled to see people cheering us and making us feel so valued.”

World T.E.A.M. has been organizing and directing Face of America for nearly two decades. The first Face of America in 2000 saw two teams of adaptive and able-bodied cyclists ride from each coast and meet under the Gateway Arch in St. Louis, Mo. In 2002 and 2003, the ride honored the civilian and military victims of the September 2001 attacks on America. More than 1,000 athletes rode from Ground Zero in New York City to the Pentagon in Arlington, Va. in September, 2002. The following September, more than 600 riders completed this three-day journey. Since 2006, the Face of America has honored injured and disabled military veterans from wars and conflicts worldwide with inclusive rides between the capitol in Washington and the Civil War battlefields of Gettysburg. In 2016, a new route from Valley Forge, Pa. was added to include a greater number of athletes in the ride.

The mission statement of World T.E.A.M. states that the organization “brings adaptive and able-bodied athletes together by empowering, enabling and engaging individuals through inclusive athletic events. For 25 years, our organization has used athletics to challenge men, women and children with disabilities to accomplish goals they never thought possible. In all our events — whether mountain climbing, biking, white water rafting or many other sports — we include both adaptive and able-bodied participants.”

Six hundred thousand dollars was raised by the riders and their teams in this Gettysburg ride alone. Col. Greg Gadson was the top individual fundraiser. Gadson lost both legs on May 7, 2007 in Iraq; he returned to Walter Reed and took up hand cycling to maintain his physical fitness. His first Face of America was two years later.The West Point football star is an honorary N.Y. Giant and has two SuperBowl Rings. He has acted in the movie “Battleship” and has ridden 110 miles every year since 2009.

“This ride is so important for all who participate,” Executive Director Jon Brideau said. “It is a fundraiser that will support all adaptive sports — and it is also an event that promotes camaraderie and friendships. The ride is all about helping others. It’s an athletic event that comes from the heart.”

One team of retired military was from Puerto Rico. They were here supporting their fellow vets and enjoying the cooler weather. “It is just wonderful to be part of a team and know we are making a difference,” one member said. “We have problems in Puerto Rico but this ride brings a different focus to our lives. It feels so good to support our fellow military men and women.”

Team Adaptive from Arlington, Va. raised $45,709.43. One of the members of the team, Danny Holloway was participating with his dad, retired Navy Admiral Dan Holloway. Danny Holloway had just purchased a bike, clothing, pump, helmet, clothing, arm and leg sleeves — all the paraphernalia that is needed by a biker. “My wife asked why I didn’t just donate the money that I spent on getting ready for the ride — but the fun is in the participation and doing it with my dad and my team. It is really inspirational. I have taken maybe six rides — but here I am — hoping to finish 120 miles. I know it will be painful, but I’m just excited to be here, raising money for such a wonderful cause.”

Joann Dickson-Smith was diagnosed with multiple sclerosis (MS) 25 years ago. She rode her first 110 mile ride in 2017 and returned again this year.

Charles Miller (US Army Captain, Ret) lost his sight to Retinitis Pigmentosa, an inherited disorder. He said, "We are only limited in our own minds about what we can and can't do.” Riding a tandem bicycle with pilot Scott Nickel, the Gainesville, Fla. athlete successfully completed his first Face of America ride to Gettysburg last year as a member of Team Strength & Honor.