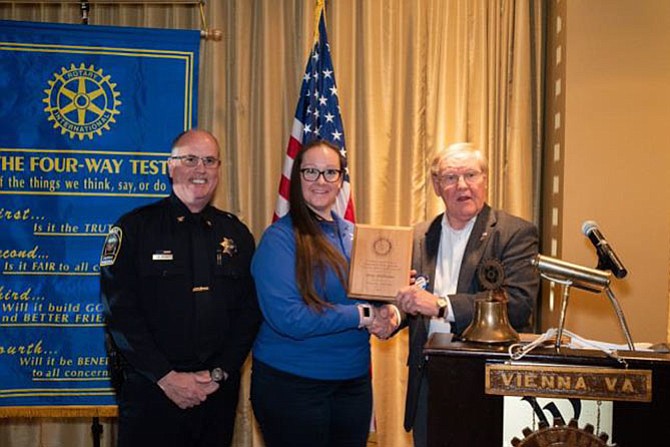 On April 13, Dispatcher Amy Milliman received the 2018 Rotary Club of Vienna Rotarian M. Jane Seeman “Service Above Self Award.” She was presented with the award at a Westwood Country Club banquet to honor public servants of the Town of Vienna. This award is given annually to a member of the Vienna Police Department whose motivation, commitment, and service to the community exemplifies the Rotary Club’s motto of “Service above Self.” Since 2009, Milliman has been an incredible asset to the Vienna Police Department. Throughout her career, she has pushed her knowledge and skill set to the highest level possible. She trains new dispatchers, trains and recertifies officers on the use of the Virginia Criminal Information Network (VCIN), and teaches the Rape Aggression Defense (RAD) program that empowers approximately 75 women every year. She is also a Fusion Center Liaison Officer responsible for suspicious activity reporting, compilation of data for yearly budget and crime statistics, and assists detectives with information gathering. For more than two years Milliman has been the person who dedicates the most time to planning, coordinating and executing biggest annual event, “The Cops and Kids Fun Run.” It is for these reasons and more that Milliman embodies “Service Above Self.”