‘Being human means having a heart, toward any race or religion,’ said 18-year-old Abdel-Latif of Palestine. 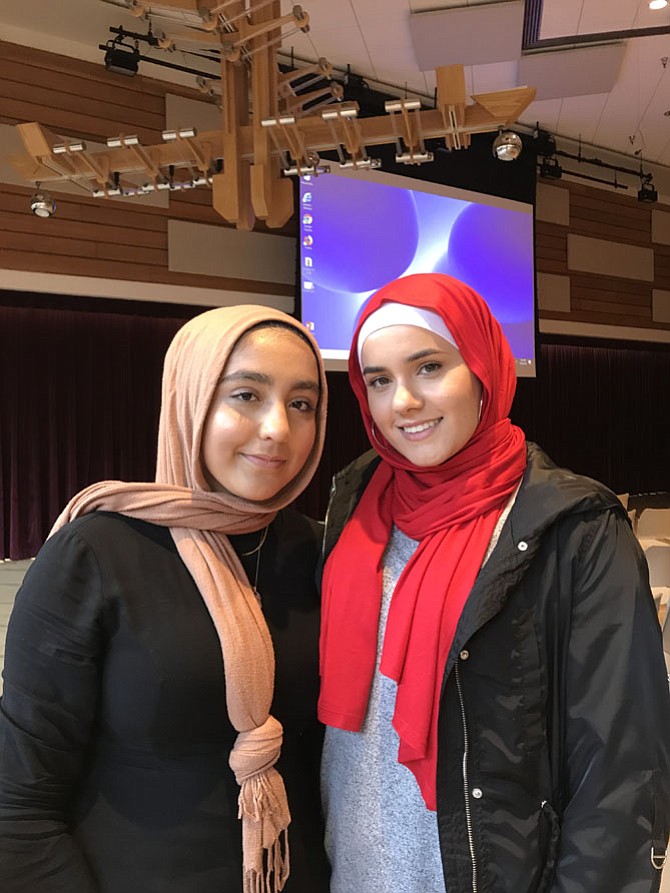 From left, Nura Behgoman, 16, of Afghanistan and a student at Herndon High School, and Danya Abdel-Latif, 18, of Palestine and a student at Park View High School, attended the event to honor Nabra Hassanen's life and support her family as the anniversary of her tragic killing nears. ‘You never expect it to happen to someone in your community,’ said Behgoman. Photo by Mercia Hobson. 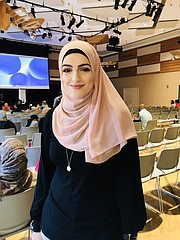 Community members and Jumana, pictured, of the nonprofit organization Pious Projects, helped organize the event, which included the screening of a documentary to commemorate Nabra Hassanen.

It's been almost one year since 17-year-old South Lakes High school student, Nabra Hassanen of Reston, left the All Dulles Area Muslim Society (ADAMS) mosque after a Ramadan prayer service with a large group of friends early in the morning of June 18.

She died shortly after, in what police say was an extension of road rage, but some community members say was an assault fueled by bias against Muslims.

As the anniversary of Hassanen's death nears, on Saturday, April 28, 2018, an event was held at the Reston Community Center to honor her life. The non-profit organization Pious Projects organized it with Reston community members.

A spokesperson for Pious Projects, Jumana attended the event. She had been working with Hassanen’s father and with other families helping them work through losses.

“I am...trying to guide them through their heartbreak and bring them something positive in the end,” Jumana said. To honor Hassanen, Pious Projects and the community had made a documentary to commemorate her, which screened at the event. They also set up an online campaign where individuals could donate funds to help build wells and a mosque in Hassanen’s name in Mali, Africa.

As the center filled with people, two teens agreed to tell why they came that day. Danya Abdel-Latif, 18, of Palestine said, ”For me, it's more than just showing up here. It's about showing support for anyone. Not just because Nabra was a Muslim, but what the event represents – being human." Abdel-Latif took a moment and gathered her thoughts. "Being human means having a heart, toward any race or religion."

Seated next to Abdel-Latif was Nura Behgoman, 16, of Afghanistan, along with her mother. Behgoman is a student at Herndon High School. Asked why she came that day, on a beautiful sunny Saturday, Behgoman replied, "The sun is out for Nabra."

Behgoman then paused and said, "When it first happened, it was a big shock for the community, and in a way, it brought us closer. It was definitely hard at first. You always hear about things happening, but you never expect it to happen to someone in your own community.

"It's important we are all here to show support for Nabra and her family and friends, because, in Islam, everyone is supposed to be there for everyone,” said Behgoman. "No matter the race, gender or religion."