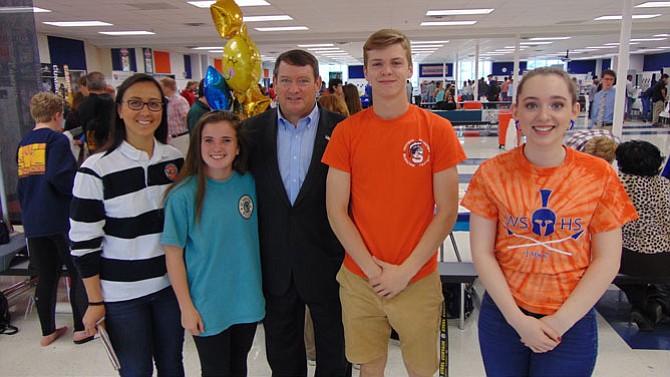 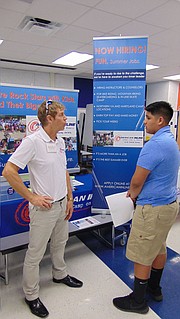 Bridget May and Colleen Boland of Atlantic Pool Service greet guests at the Teen Job Fair. 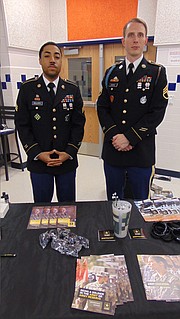 Sgt. Demarius Billups and Staff Sgt. Eric Distel, who represent the U.S. Army and Army Reserves, at their booth.

The event, sponsored by Springfield District Supervisor Pat Herrity and The Connection Newspapers, included representatives from lifeguard and pool companies, stores like Target, and military recruiters, among others. Herrity said the job fairs have grown in size from about 250 visitors when they first started four years ago, and expanded from one job fair at West Springfield to six job fairs at high schools around the county.

“This is our sixth job fair this year, which has grown from four years ago when this was the only job fair that we did in Fairfax County. So, I’m excited about providing the opportunity for all our youth and so happy that we’ve grown from one job fair to six job fairs throughout Fairfax County,” he said.

He added: “This is one of the favorite things I do as a supervisor. I absolutely love seeing our kids come out and talk with employers and get their jobs because there’s dignity in work and first jobs are important,” he said.

Scoping out a new job was Springfield resident Alan Brown, 16, a sophomore at West Springfield High School. “I am here to get information about different jobs and have a plan after I leave high school,” said Brown through his computer.

Lake Braddock Secondary Junior Charles Pritz, 16, of Burke, who was also looking, said: “I’m here at the job fair looking to find an opportunity for a summer job or internship to really gain real-world experience -- hopefully in the field that I’d be interested in.”

Samuel Dade, 18, who attends Mount Vernon High School, said: “I came to the job fair to get a job so when I’m going through school l can pay for school and not be broke. So that’s basically why I came here today.”

Kyle Vanderlaan, 16, of Springfield, who attends West Springfield High, said: “I’m just looking for a job. It’s a really good opportunity to meet people and companies so you can just choose where ever you want to go and find out whatever you want to do.”

Ivan Ramirez, 14, of Falls Church, who attends Corpus Christi School, added: “I came to the job fair to look for a job at a young age. I want to work with kids younger than me to help them do something in life and also get money.”

West Springfield resident Ben Anderson, 15, who attends West Springfield High, said: “I’m just looking for a job this summer. I’m trying to get some money to pay for whatever I need. I think it’s great that there are these places around here that are coming to the fair.”