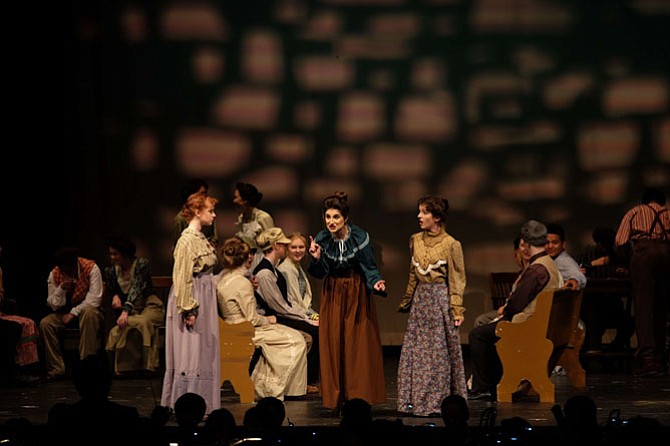 The Titanic: everyone knows what tragically happened to the ship, but only a few know more than that. “Titanic the Musical,” based on the book written by Peter Stone and music and lyrics written by Maury Yeston, received three Tony Awards and ran for 804 performances. It explores the lives of many passengers aboard the ship, going into their relationships, their flaws, and their aspirations. Oakton High School's production of the powerfully emotional musical truly brought the horrific events to life through an extremely talented cast and crew.

Throughout the show, many lives of the souls on board of that doomed ship were developed onstage, creating a personal, unforgettable experience for the audience. Thomas Andrews (Parker Waters), the designer of the ship, showed a large character arc from proudly opening his ship to the public, to raging about what he could have done to keep the Titanic from sinking. Waters' powerful vocals and committed character work were beautifully displayed, especially during the heart-wrenching song, "Mr. Andrews' Vision." Another character that shone on stage was Frederick Barrett (Maxwell Branciforte), one of the stokers who fueled the Titanic's powerful boilers. His stunning, moving vocals guided the audience through his personal life as they learned about his fears that the ship was going too fast and the strong love he felt for his soon-to-be fiance at home. Branciforte's spot-on character choices drew the audience into his life, and they laughed and cried alongside him.

Yet another strong character in the musical was the radio operator, Harold Bride (Joe Malone). His character was brought to a dramatic climax at the end that brought tears to the eyes of the audience, as they experienced his frustration and loss of control over the drastic situation. His on-pitch, engaging vocals also guided the audience through the story.

Alice Beane (Julia Ferri) was a second class passenger obsessed with the first class, and she added some much needed comedic moments that relieved the stressful tension. Her perfect comedic timing, paired with hilarious facial expressions, made her a well-loved character. Henry Etches (Liam Bloom) also added moments of laughter through his energetic character and quirky movements. Caroline Neville (Lindsey Jacobson) had a beautiful voice that moved the audience as they learned about her story and quest for love. One of the strongest characters was the third-class passenger Kate McGowan (Shiva Zarean). Zarean showed true commitment to her character, never losing her spot-on Irish accent or lacking in emotion.

The show's use of an impressively accurate set, props, and costumes truly brought the show to life, making it as authentic as possible. The use of projections to create the illusion of stars and water, paired with a flying rig, had a very dramatic and realistic effect. The audience was easily brought into every emotional moment not only because of that, but because of the incredible student orchestra that perfectly performed each song. The makeup was subtle and accurate for each performer, especially the captain's. Every little detail in the show was well-tended to, making for a moving performance.

Overall, “Titanic the Musical” was a beautiful show impeccably performed by an accomplished cast and crew. Every single member of the cast was extremely committed, and none of them was lacking in emotion. Each song told a story through amazing vocals and simple, yet effective, choreography. The tragic story was wonderfully told, and the audience laughed, gasped, and cried through every heart-stopping moment.