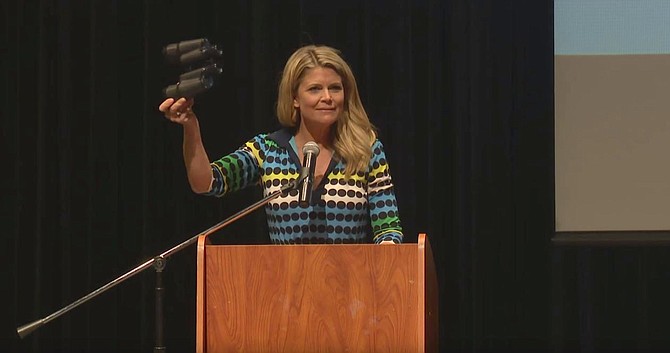 Kimberly Suiters with one of the disguised flasks. Photo contributed

But they were all flasks.

“Arlington County has a problem,” said Suiters. “The whole country has a drug problem, and we’re here in this room because we care and we’re going to fix it.”

Over the last few years, drug abuse has become a nationwide problem on the rise. In Arlington, opioid overdoses increased from none in 2013 and seven in 2014 to 74 last year. Between 2015 and 2017, Arlington saw a 245 percent increase in opioid treatment.

“We’re doing this to ourselves,” said Suiters, “and we need to find a solution.”

On May 2 at Kenmore Middle School, Suiters, a consumer investigator and anchor for WJLA-TV, moderated a panel discussing how to confront and overcome Arlington’s substance abuse problem. A large part of the discussion centered around avoiding the stigma of drug abusers to be able to lovingly, without confrontation, approach someone who has a drug problem.

“We want to remove the stigma that people with drug problems are ‘the others’,” said Suiters. “That they’re people you wouldn’t want to be in contact with. They’re people you love, people you admire. Drug abuse affects everyone.”

Suzanne Somerville, the county’s clinical services bureau chief, was responsible for building a stakeholder task force to confront the problem. Somerville said when she started outreach in the community, she found a wide array of collaborative partners who were eager to help.

“The best way to stop people from getting into opioid overdose is keeping them from using in the first place,” said Somerville. “[We’re] looking at minor drugs, marijuana and alcohol, and recognizing that if they start using at an early age, the chance they could develop other addictions is higher.”

Among those that spoke were the family members of Chris Atwood, a Reston resident who died at 21 as a result of a drug overdose. Atwood’s family noted that oftentimes drug abusers have to go through rehabilitation programs several times for them to really take hold. For many families, rehab can be prohibitively expensive.

“One treatment center was costing $1,000 per day,” said Jenny Atwood, Chris’ sister, “We were lucky to even be able to get in.”

Jenny Atwood urged concerned citizens to become trained in CPR and to carry Naloxone, a drug that can treat a narcotic overdose in an emergency situation.

Detective Jackie Pagan, a school resource officer, also encouraged parents to monitor their children’s activity and be aware of their activities that could be related to drug abuse. Pagan said parents should regularly check their Amazon account history and credit card information for unexpected purchases, as Pagan said often times children can get access to drugs or paraphernalia online through their parents’ accounts.

Pagan also said that many parents are often afraid to look through their children’s phone and see their activity to give their children a sense of privacy, but Pagan said parents should turn it into a collaborative activity where they can help their child understand what is and isn’t dangerous behavior.

More locally, Pagan also said to be wary of children saying they’re walking through Glencarlyn Park as a shortcut. Pagan said the park isn’t much of a shortcut to anywhere, and instead is commonly used as a drug hangout because of its isolation.

If parents do discover that their child has a substance abuse problem, Norma Jimenez from Arlington County Children’s Behavioral Health Bureau said they should seek resources to collaboratively combat the possibility of addiction. Jimenez said substance abuse can often be linked to undiagnosed mental health problems, and treatment that deals with both can increase the lasting impact.

“We have to confront the stigma,” said Somerville. “If we’re too embarrassed to talk about a family member who is addicted, we won’t bring it to attention.”