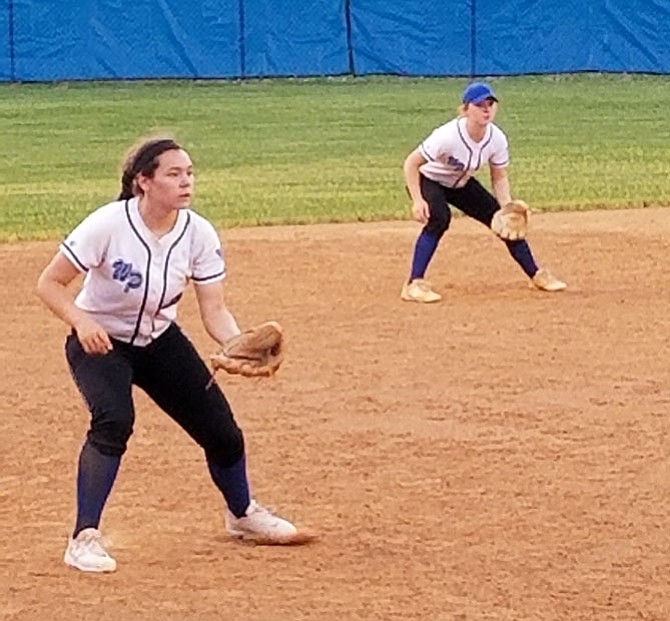 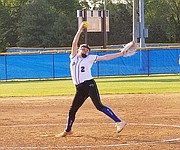 One year after winning the Patriot Conference championship in then-head coach Craig Maniglia’s final season, the Wolverines find themselves in position to compete for another title under a different set of circumstances.

Kara Davis, former West Potomac JV head coach and varsity assistant, is now head coach of the varsity squad, which is part of the new Gunston District. While some of the details — and several of the players — have changed, the winning has continued for the Wolverines, who improved to 6-1 in district play with a 14-4, five-inning victory over T.C. Williams on Monday at West Potomac High School.

The Wolverines batting order included six players who were freshmen or sophomores. That didn’t stop West Potomac from exploding for nine runs in the first inning and cruising to victory.

“I think overall they came [into the season with a] high [level of] confidence — and with this game, confidence is key,” Davis said. “We are a very young team and we have a lot of our starters that weren’t here last year, so I think it’s kind of a battle between knowing where we came from and knowing what we can do for the future.”

Freshman leadoff hitter Katie Jo Moery's performance Monday gave West Potomac fans reason for optimism not only for this season, but for the remaining three years of her high school career. The middle infielder went 2-for-3 with three RBIs, including a solo home run to lead off the bottom of the fourth inning.

“It was high, inside, [in] my wheelhouse — that’s usually where I hit it,” Moery said of the pitch she deposited over the fence in right-center. “Luckily, she gave it to me.”

Moery played second base for most of the season but recently moved to shortstop. Davis, who played college softball at George Mason, praised No. 21’s versatility and softball IQ.

“Any freshman coming in and being as talented as she is, it’s difficult to know your place because you belong, obviously, but you don’t want to step [on] anyone’s toes being a freshman,” Davis said. “But with her, she brings in a level of talent as a freshman that you just don’t see that often.”

Fellow freshmen Asia Reeves and Trystany Urdininea also had big games for West Potomac. Reeves went 3-for-4 with a pair of doubles and an RBI, and Urdininea finished 2-for-2 with a triple and an RBI.

“I wasn’t really sure what we had coming in,” Davis said. “… I had no idea that our freshman class coming in this year was as stacked as they are so it’s very exciting to know that we have three, four years ahead of just pure talent.”

Not every Wolverine is a newcomer, however.

Sophomore pitcher Claire Davidson was the MVP of last season’s Patriot Conference tournament but has been battling a back injury of late, Davis said. Junior Annabelle Bates started in the circle on Monday, pitching two scoreless innings.

Junior infielder Jennavieve Miller is in her third varsity season and was a member of last year’s all-tournament team. Miller played shortstop for most of the year before recently moving to third base. On Monday, she went 2-for-4 with a triple and two RBIs.

Miller said last season’s run to a conference championship, which included a victory over Patriot power Lake Braddock in the tournament semifinals, was a confidence boost and the team is looking forward to the next challenge.

“It was amazing,” Miller said. “… We finally beat Lake Braddock, we beat West Springfield, we got the championship, so what’s next?”

“I would very much like to win the [district] — it’s kind of my big … goal,” Davis said. “Overall, I think we are very, very talented and I think they need to see that. I think it’s hard being young, because in the back of their mind they always think, ‘I have another year, I have another year.’ If they can just capitalize on the talent they have now and then use that going forward, they’re going to be hard to beat.”