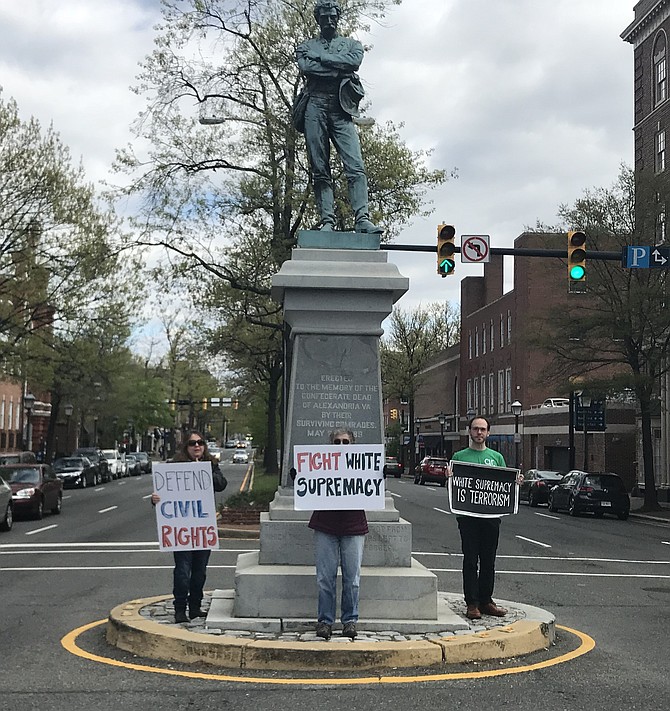 Members of Grassroots Alexandria in front of the Confederate monument in Old Town. Photo by James Cullum/Gazette Packet

Protests in front of Alexandria’s Appomattox statue are here to stay. This May 24 marks the 129th anniversary of the dedication of the famous Confederate monument in the middle of Old Town. It depicts a nameless and hatless Confederate soldier facing south along South Washington and Prince streets. Since last August, local nonprofit Grassroots Alexandria has dedicated its second and fourth Sunday mornings every month to protesting at both the statue and in front of white nationalist Richard Spencer’s Old Town apartment/office.

Norah Dick, the leader of Grassroot Alexandria’s anti-fascist team, says that the statue does not reflect Alexandria’s values and recommends replacing it with a statue of former slave and abolitionist Harriet Ann Jacobs. The group wants the statue moved or covered, but the City Council’s hands are tied. Council voted to move the statue in 2016, but the move needed the backing of a Republican-controlled state legislature and the statue remains.

“We are not against history. We know that Alexandria has a very dark past, has a history of being a slaveholding area. We recognize that, but we just don’t feel like it represents the heritage of communities of color,” Dick said. “Alexandria ... was captured by Union forces very quickly. We feel like we would rather have a statue or symbol the represents some of the wonderful and positive Alexandrians who have lived in the city, of which there are many.”

Del. Mark Levine (D-45) introduced two bills in this year’s General Assembly session — both failed — that would have given localities the power to dictate where their monuments are placed and provided the legislature with a choice to replace Virginia’s Robert E. Lee statue in the U.S. Capitol. But Levine will not reintroduce the bills, as House rules stipulate members can only introduce 15 bills during the regular session in odd numbered years.

“I argued it, I gave it a try. If somebody else introduces it, I’ll probably vote for it,” Levine said. “I think the right answer is for the City Council to put up another statue, perhaps a memorial to the slaves. I personally want to see a statue for the trail of tears, which began in Alexandria.”

Grassroots Alexandria plans to protest at Appomattox from 10 a.m. to 11:30 a.m. every second and fourth Sunday of the month, and from 12:30 p.m. to 2 p.m. outside of Richard Spencer’s apartment/office.

“We did have some negative reaction. We had some hecklers,” Dick said. “We see ourselves continuing into the foreseeable future, and we connect it to a national erosion of civil rights, and this is part of a larger movement of resistance and social justice. We don’t see that ending any time soon.”