Silberberg and Wilson square off in first mayoral debate. 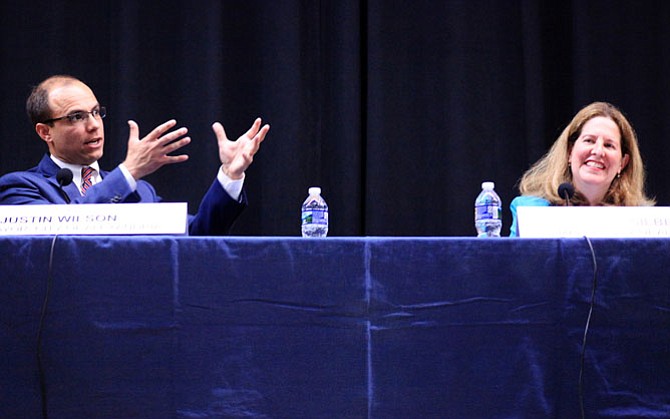 Hundreds attended the first debate between Mayor Allison Silberberg and Vice Mayor Justin Wilson at the Mount Vernon Community School auditorium in Del Ray on May 2.

After three years of spats on the City Council dais, Mayor Allison Silberberg and Vice Mayor Justin Wilson finally climbed into the ring for the long-expected showdown. At the May 2 debate at the Mount Vernon Community School, Silberberg defended her record of frequently dissenting council votes, often against council coalitions built by Wilson.

The first shots came on the topic of parking and small businesses, where Wilson noted that Silberberg was the lone vote against a parking initiative late last year that allowed businesses operating during different peak hours to utilized shared parking spaces. In what became a common refrain throughout the evening, Silberberg accused Wilson of taking her vote out of context, arguing that the broader policy being voted on was allowing commercial properties to provide less parking.

A few moments later, Wilson pointed to another vote where the council had moved to cut red tape for small businesses as part of zoning reforms despite objections from Silberberg. Wilson noted that while on the council, he’d helped reform the city code to make it easier to open tattoo shops and massage parlors, which had been limited under city code that he said read like a bad romance novel. Silberberg said she agreed with the idea of streamlining the city’s processes, but that the city needed to make greater efforts in public outreach before approving them.

One day before the council’s approval of the FY 2019 budget, Silberberg and Wilson revisited their feud the earlier year when Silberberg had voted against the tax rate increase proposed by Wilson.

“I fully supported the City Manager’s reasonable and proactive budget,” said Silberberg. “It met the school needs. But I couldn’t support the historic tax hike.”

Wilson had embraced the tax increase as necessary to vouchsafe the city’s fiscal future.

Wilson also attacked Silberberg over her record on affordable housing, one of the main talking points in the city over the last few years as local government struggles to provide committed affordable units to compensate for the falling supply of market-rate affordable ones. Wilson pointed to four affordable housing projects, Ramsey Homes, Jackson Crossing, St. James, and the Beauregard Plan, all of which Silberberg had expressed opposition to. But Silberberg again countered that Wilson had taken her votes out of context, and that each of the projects had significant problems. The tearing down of Ramsey Homes had been a contentious issue on the City Council, one Silberberg said had faced significant pushback from the local community where a lawsuit had been threatened at one point. Jackson Crossing had parking problems. St. James had a pool amenity that would have been off-limits for affordable housing residents. With the Beauregard Plan, Silberberg argued that the city was getting insufficient affordable housing for what it was giving up.

The debate put Silberberg and Wilson into stark contrast. For Silberberg, much of the conversation centered on working with local residents and communities before making decisions, while Wilson’s goals focused on long-term growth and investments into the city.

“We have very different visions for the future,” said Wilson. “[Mine is] a community where we don’t just talk about ideas but we see them as investments into our community.”

“I’m fighting for a livable Alexandria for all of us,” said Silberberg. “I want to preserve and protect the city we love.”