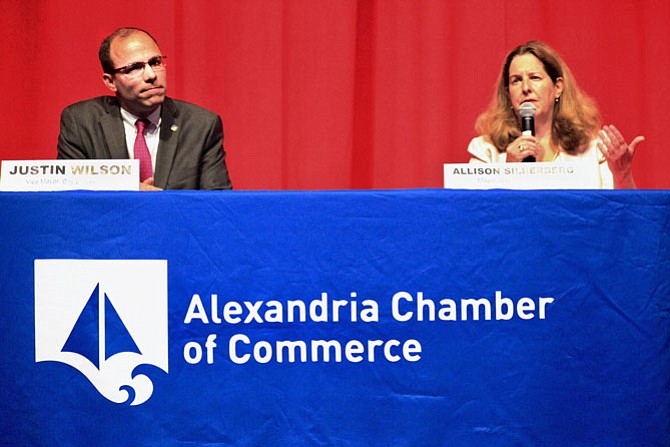 One would be hard pressed to pick a more fitting atmosphere for the mayoral debate. On May 14, a freak derecho swept through Alexandria. Warning claxons blared from phones in the audience at regular intervals in the T.C. Williams auditorium, and the sound of thunder and heavy rain nearly drowned out answers from the candidates. But as anyone who's followed Alexandria politics for the last few years would expect, the real sparks were between Mayor Allison Silberberg and mayoral challenger Vice Mayor Justin Wilson.

In their second debate of the campaign season, the differences between the two candidates crystallized further. For Silberberg, the campaign is about preserving Alexandria’s neighborhoods and small town feeling in the face of mounting developmental pressures. But for Wilson, the campaign is about moving the city into a stronger position to face the dire fiscal challenges down the road.

The debate, hosted by the Chamber of Commerce, hit both candidates about questions surrounding the Business Improvement District (BID). The BID had been a proposal in the works for years that would create an organization in Old Town that supported local businesses with advertising, organizing, and representation funded by an additional tax. Both candidates distanced themselves from the BID. Wilson noted that the vote on the Council to initiate exploration of the proposal had been a unanimous one.

“This had to be supported by businesses,” said Wilson. “The idea will probably come back one day, but our role is not to create a BID, it’s to get out of the way if the businesses want to support one.”

Wilson and Silberberg both noted that the support from the majority of Old Town businesses just wasn’t there for this proposal.

“I had concerns from the beginning,” said Silberberg. “The majority of owners said the BID was not good for us. The city manager pulled the item so there was no vote, but I said it was not going to meet our challenges: parking, shopping online, and advertising in the region, which we’re already doing.”

Both Wilson and Silberberg tried to accuse the other of having supported it, although over the last two years both Silberberg and Wilson had shown skepticism of the proposal. Wilson specifically said Silberberg had supported the BID at a Chamber of Commerce breakfast last year, but at the March 27 breakfast where the BID was discussed Silberberg had specifically said the opposite, that the advertising of Old Town throughout the region being proposed as part of the BID was already what the Alexandria Economic Development Partnership and Visit Alexandria were doing.

Among the topics forefront in the minds of the audience was Alexandria’s bad Metro week. First came the announcement that the Metro would be closing all of the Alexandria stations for the duration of the 2019 summer. This was followed by an announcement that the Potomac Yard Metro Station was several million dollars over budget and the southern entrance to the station, a selling point for many of the new residential complexes and businesses moving into the area, was being removed from the project.

Both candidates were more open about the plans for 2019’s closures than the southern Potomac Yard entrance, which is tied up in confidentiality agreements. For Wilson, the closures next year are an example of what happens when a governing body ignores and doesn’t properly plan for impending economic hardships. Wilson said at least Alexandria had experience with last year’s Safe Track initiative to get ready for how to plan around the closures. Silberberg noted that the platforms are in dire need of repair and that the city would look at buses and other alternatives as the closures got closer. On Potomac Yard, Silberberg said the city would continue looking for more sources of funding and that it would continue to look trying to add the southern entrance.

Continuing on the theme of needing longer term fiscal planning, Wilson argued that the city should look into adopting a multi-year operating budget. While the city has a 10-year Capital Improvement Plan for larger projects, the city’s annual budget for its various departments and programs is determined on an annual basis. Wilson pointed to the state, which has a multi-year budget, as an example to follow.

“I can’t agree with a multi-year budget,” Silberberg answered, “That’s what the Soviet Union did. Things change too rapidly.”

The primary elections will be held on June 12. Registered voters can vote in either party primary, but not both.