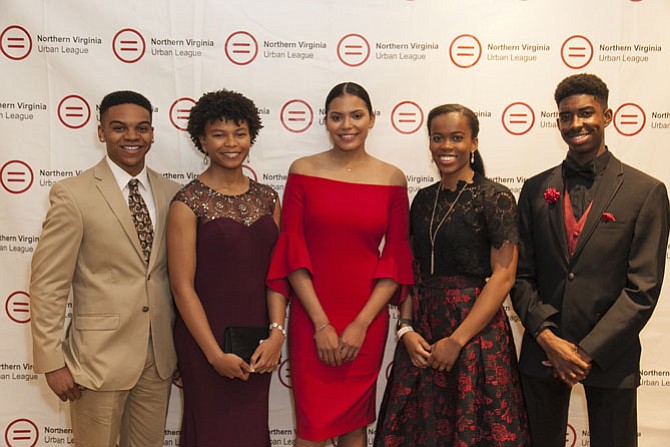 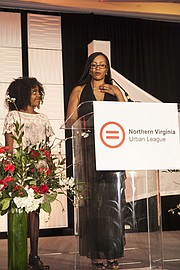 From left: Naomi Wadler (Youth Activist) and recipient of the Young Emerging Leader Award is being introduced by Diane McLaughlin (NVUL Gala Chair and Board Vice Chair) to give remarks.

Over $32,500 in scholarships were awarded to local minority Northern Virginia students, including a first-time youth award to 11-year old Naomi Wadler, the Alexandria fifth grader who spoke at the March for Our Lives in Washington, D.C.

The honors were presented at the 28th Annual Community Service and Scholarship Awards event on April 27th at the Hilton McLean Tysons Corner. Additionally, the gala program, emceed by radio personality Angela Stribling of WHUR 96.3, paid homage to the historic landmark, Freedom House Museum in Alexandria and kicked off a Capital Campaign to preserve the site, which was once headquarters for the largest domestic slave-trading firm in America and now serves as headquarters for the NVUL. Mayor Alison Silberberg presented a proclamation to NVUL Board Chair Tracey Walker and paid tribute to NVUL’s work in the areas of education, jobs, and justice in her remarks.

Board Chair Tracey Walker said, “‘Preserving Our History and Empowering the Future’ is a fitting theme for the evening. The dark memories of the antebellum past are now inspiring achievements of these amazing leaders and scholars. Their accomplishments represent hope, pride, reconciliation and effective pathways forward to an empowered tomorrow. The League is proud to serve the community with programming to make a difference for the future.”

For more information about the Northern Virginia Urban League, visit www.nvul.org or call 703-836-2858.