‘On Sacred Soil’ in Arlington
Votes

‘On Sacred Soil’ in Arlington

Thousands gather to remember the fallen. 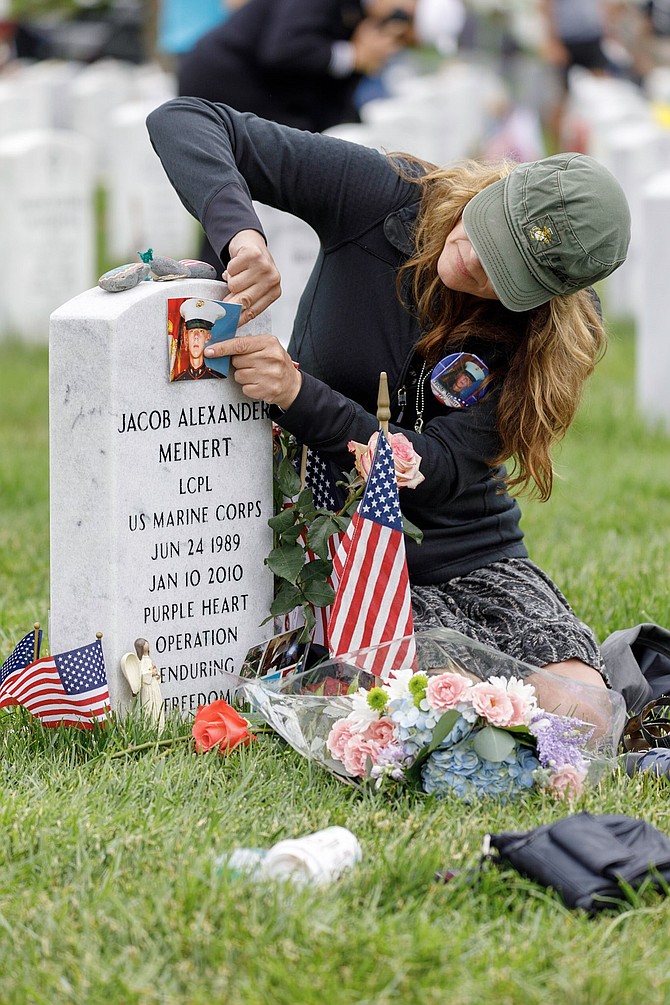 Randi Meinert of Racine, Wisc., places a photo of her brother Jacob on his headstone in Section 60 of Arlington National Cemetery following the Memorial Day ceremonies May 28. Lance Corporal Jacob Meinert was killed Jan. 10, 2010, when he stepped on a land mine while serving with the U.S. Marines in Afghanistan. Photo by Mark Mogle.

“Today we pay tribute to their service, we mourn alongside their families and we strive to be worthy of their sacrifice.” — President Donald Trump 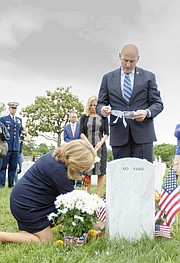 John Kelly, Chief of Staff to President Donald Trump, stands as Karen Kelly places flowers at the gravesite of their son, Marine 2nd Lt. Robert M. Kelly, who was killed in November 2010 after he stepped on a land mine while on patrol in southern Afghanistan. 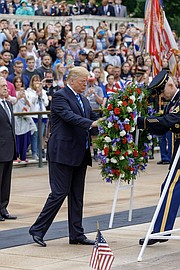 President Donald Trump places a wreath at the Tomb of the Unknown Solider during the Memorial Day ceremonies May 28 at Arlington National Cemetery. 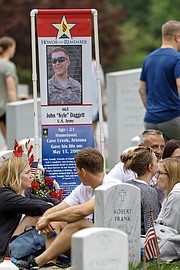 Friends and family members gather at Arlington National Cemetery May 28 to remember Sgt. John Kyle Daggett, who died May 15, 2008, of injuries sustained from a rocket-propelled grenade attack in Baghdad.

President Donald Trump was among the thousands gathered at Arlington National Cemetery May 28 to remember the fallen and pay tribute to the men and women who have made the ultimate sacrifice in service to the nation.

“We are gathered here on the sacred soil of Arlington National Cemetery to honor the lives and deeds of America’s greatest heroes, the men and women who laid down their lives for our freedom,” said Trump as he addressed a crowd of military leaders, veterans and family members in the cemetery’s amphitheater. "Today we pay tribute to their service, we mourn alongside their families and we strive to be worthy of their sacrifice."

Trump’s Chief of Staff John Kelly attended the Memorial Day tribute with his wife Karen. Their son, Marine 2nd Lt. Robert M. Kelly, was killed in November 2010 after he stepped on a land mine while on patrol in southern Afghanistan. He is buried in Section 60 at the cemetery.

“The heroes who rest in these hallowed fields, in cemeteries, battlefields near and far, are drawn from the full tapestry of American life,” Trump said. “They come from every generation, from towering cities and wind-swept prairies, from privilege and from poverty. They were generals and privates, captains and corporals of every race, color and of every creed, but they were all brothers and sisters in arms. And they were all united then, as they are united now, forever, by their undying love of our great country."

Prior to making his remarks, Trump placed a wreath at the Tomb of the Unknown Soldier. He was joined by Gen. Joseph Dunford, the current chairman of the Joint Chiefs of Staff. Dunford honored those who "gave their last full measure so we could live in freedom and raise our children in peace.”

“For the families they left behind, every day is Memorial Day,” Dunford said.