Springtime Party to Raise Funds for Seniors at Culpepper Garden 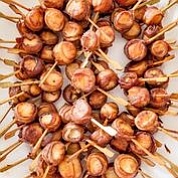 Stroll around the landscaped gardens at Culpepper Garden, slurp up an oyster at the raw bar or head for Chef Ray's spring rolls with duck sauce or figs with caramelized onion. Bid on tickets at Arena Stage, Theatre on the Run, or the Washington Ballet. Fill a growler at Port City Brewery, or stay at the Westin Arlington Gateway. Or you could bid on a personal behind-the-scenes tour and live broadcast by Channel 4's Doreen Gentzler whose mother, Rita O'Flinn, lived at Culpepper Garden until her passing in March of this year.

It is the fifth annual springtime party on June 2 from 5:30-7:30 p.m. at Culpepper Garden on 4435 N. Pershing Drive. Culpepper Garden provides affordable housing and assisted living for the area's lowest income people over age 62. Funds from the evening will be used to supplement programs and services to help improve the well being of residents.

Culpepper Garden recently began a major renovation of the 204 independent living apartments that opened in 1975. The renovation, expected to be completed in 2020, will include upgrading of all apartment interiors and public spaces, replacing all major systems and adding six apartments.

The short program will include a welcoming by the Culpepper Garden Board of Directors Chair Mary Susan Philp, as well as remarks by state Sen. Barbara Favola and County Board Member John Vihstadt and honorary chairs Suzie and Bill Buck.

An evening full of activities will feature music by the Potomac Harmony Chorus. As you make your choice at the gelato bar before heading for another stroll through the garden, put one more bid on the Total Wine and More wine tasting class for 20.