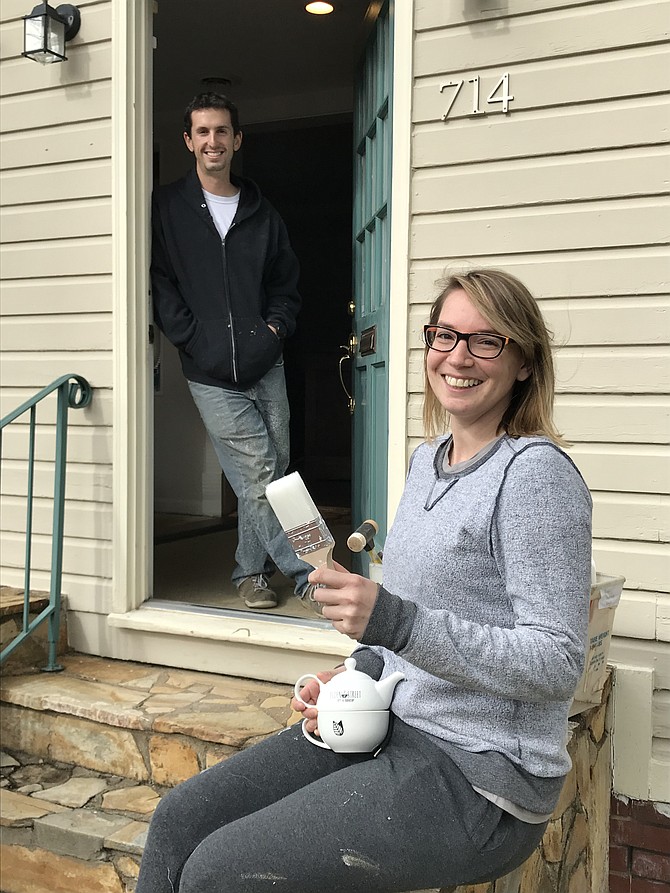 Owner of Elden Street Tea Shop, Rachel Eisenfeld, is ready for a pot of tea before she and Michael Rozner begin painting the interior of her new shop located on a historic street in downtown Herndon. Photo by Mercia Hobson.

So why would a new business named "Elden Street Tea Shop" lease a building located on historic Pine Street, not Elden Street in downtown Herndon?

Rachel Eisenfeld is the owner of Elden Street Tea Shop. After watching ongoing construction and then delays on a smaller retail space she had hoped to close on in a new mixed-use development on Elden Street; hence the name Elden Street Tea Shop, a larger stand-alone building with private parking in the rear became available to lease one block over on Pine Street.

Balancing the merits of what might be best for her business, buying a small commercial condo unit or leasing a larger freestanding space, Eisenfeld said she jumped at the chance and closed the deal. "Four hundred seventy-five square feet vs. thirteen-hundred square feet."

"It's been a long time to come," said Eisenfeld. "We are thrilled to be able to give Northern Virginia this unique tea shop. We will be offering premium loose leaf teas, its accoutrements, and community social and tea events," Eisenfeld said.

Elden Street Tea Shop also seeks to feature local art for sale, which will be temporarily installed on the walls of the shop’s dining, and retail spaces said Eisenfeld. “It will continue to offer its popular 'afternoon board games,' established at its recently closed 'pop-up tea venue' at ArtSpace Herndon, as well as donate a portion of the shop's proceeds to community causes,” said Eisenfeld.

On the afternoon of the interview, Michael Rozner stood ready to help Eisenfeld paint the interior. "We should be opening mid-November," Rozner said.

Located at 714 Pine Street, one block from Elden, Elden Street Tea Shop boasts free street parking out front and rare private parking behind the establishment for its customers.

Asked if she would keep the name, "Elden Street Tea Shop," since it wouldn't be on Elden Street as initially planned, Eisenfeld said, "Elden Street is well known, and we are only one block away, on Pine Street," she said with a smile.