Trunk or Treat at Lewinsville Presbyterian

Several hundred trick-or-treat at decorated cars in the parking lot and play games. 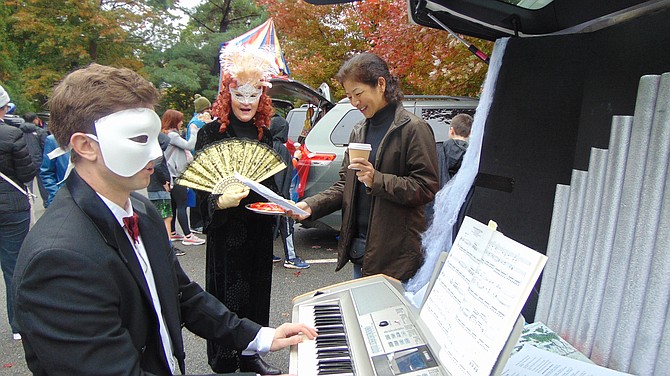 John Nothaft, director of music, with Sally McKeown, choir member, and Yuko Takakusaki, caroler, with their “Phantom of the Opera”-themed car. Photo by Steve Hibbard. 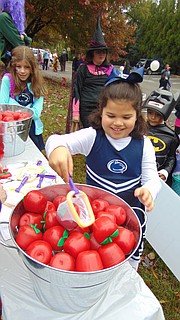 Lexi Bensten, 8, of McLean, dressed as a Penn State Cheerleader, bobs for apples at the Lewinsville Presbyterian Church’s Trunk or Treat.

Brad Fisk of Falls Church dressed as Dracula with his Dracula’s Castle car.

Dressed as an elephant, Rachel Ji, 9, of McLean plays with the Pumpkin Ball Toss.

Several hundred people attended Lewinsville Presbyterian Church of McLean’s Trunk or Treat event on Saturday, Oct. 27, 2018, where parishioners decorated their cars in various Halloween themes and handed out treats to the kids in the parking lot.

There was a Noah’s Ark car, a Phantom of the Opera car, a Harry Potter car, Pokémon car and a Jaws Attack car, as well as general scary Halloween-themed cars. In addition, kids could play carnival games, get their faces painted and watch a puppet show.

According to Scott Ramsey, Pastor of Lewinsville Presbyterian Church: “With the Trunk or Treat event, what we’re trying to do is generally bless the neighborhood at this time of year, providing a safe place where families and kids can come out, socialize with each other, get to know each other in a fun environment, and to reach out and extend the love and energy and fellowship that we enjoy in the congregation out into the neighborhood and into the community.”

He said people spent the last week decorating their vehicles, adding that one family had difficulty making up its mind of which theme to choose so they brought two cars and decorated them both.

Lewinsville Presbyterian Church Youth Fellowship Pastor Annamarie Groenenboom said about six people from the group participated. “They are standing at their own trunk; they are inviting kids to reach into the mouth of the shark. Also, we have a lot of youth who are doing puppets [in the puppet show] and welcoming people to come into this area…. We’re all having a real good time.”