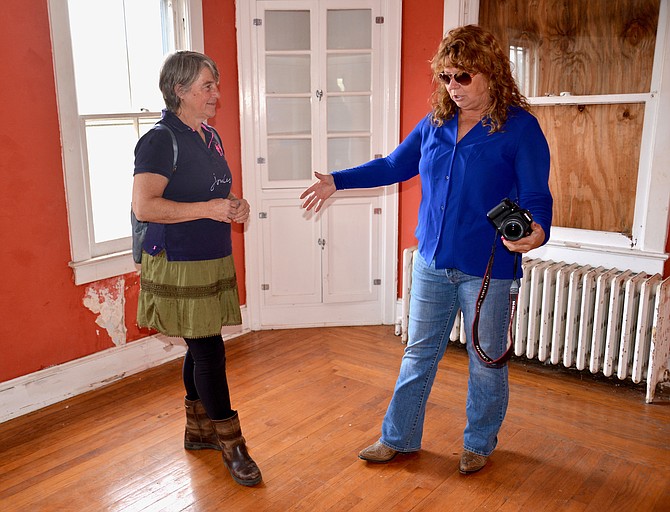 Past and future meet at the Turner Farmhouse: From left, new leaseholder Sarah Kirk walks the house with Jo Turner, widow of Mark Turner, whose family built the house that generations of Turners, including Jo and her family, called home. “I haven’t been inside here since the farm was sold to the Park Authority,” said Turner. “I thought I would do okay today, but it is emotional. I can’t wait to see it come back to life.” Photo by Andrea Worker.

The proud family watching the ceremony from the front row are Sarah’s parents and husband Glen. Her son, Nicky Zoski, is in the back, far right. 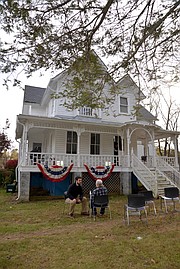 The historic Turner Farmhouse on Georgetown Pike will soon be home to new resident curator Sarah Kirk and her family. After the lease signing ceremony, officials and guests went inside for a tour of the property, while Sarah's husband enjoyed the surroundings with his sign-language assistant.

In the audience there were five current and past presidents of the Great Falls Historical Society: Suzan Cochran, Karen Washburn, Kathleen Murphy, Glen Sjoblom and current President Jan Schar. Cochran traveled from Annapolis just for the signing, as she lives near there now.

“For the first time in a long time, it will be lights on, grass cut and livestock once more at Turner farmhouse!” —Bill Canis, president of the Great Falls Citizens Association

“They say that patience is a virtue. Well, I am surrounded by a lot of virtuous people today,” said Supervisor John Foust (D-Dranesville), addressing the crowd gathered to witness the lease-signing by county officials and their newest resident curator, Sarah Kirk. “They also say that good things come to those that wait. I say that this day was well worth waiting for.”

Thursday, Nov. 1, was the day that the farmhouse at Turner Park in Great Falls was officially signed over, first from the Fairfax County Park Authority (FCPA) to the Fairfax County Board of Supervisors, and then from the Board to Sarah Kirk and her family for an initial term of 20 years. And it was a long time coming.

The farmhouse was built in 1905 by the Turner family, who were also instrumental in the construction of the village’s Grange public assembly center in the 1920s. For generations, the Turners were involved members of the Great Falls community as they worked the land that was lauded as a “model for farmers” by an agricultural magazine in 1948.

But as times – and family needs – changed, the farmhouse at 10609 Georgetown Pike was eventually sold to the Park Authority, and “thanks are due to Kevin Fay [then an Authority official] who pushed for that purchase,” said Foust. So the historic Queen Anne-style house, the barn and other buildings on the property which sit on the 52-acre Turner Park with its equestrian facilities and the Turner Park Observatory, was passed into the Park Authority’s care.

From its purchase in 2010 to the lease signing in late 2018 - Supervisor Foust wasn’t kidding. That is a long wait. So, what happened in between?

As the Park Authority’s David Buchta and Stephanie Langton explain, the Authority has hundreds of parks and dozens of historic properties to account for and maintain. “As you can imagine, there just aren’t the resources to spare for them all.”

THE ANSWER to this dilemma may have taken a while to formulate and implement, but it’s potentially a “wonderful way to protect our history and make it accessible to all of our residents,” said Buchta, the manager of the Heritage Conservation Branch of the FCPA.

In 2011 the Virginia Legislature authorized the establishment of a resident curator program, which would allow the stakeholder jurisdiction to grant leases of historic properties to qualified and vetted persons who would be responsible for their rehabilitation and be required to provide some degree of access to the public of the historic sites. With Foust as champion of the cause, the Fairfax County Board of Supervisors adopted the program in November of 2014, with the Park Authority in charge of its local development and implementation.

With lots of legalities and logistics to be worked through, it would be another three years before the program was up and running, but in 2017 the Board approved Steven McCullough as the county’s first resident curator, giving him the lease to the Stempson House in Laurel Hill which started its existence as a home for a prison officer at the Lorton Reformatory, built by the prisoners.

With the first attempt so far a success, the FCPA was ready to get things rolling, and applications were taken for leaseholder at the Turner Farmhouse.

Speaking at the ceremony, Bill Canis, president of the Great Falls Citizens Association, said the organization was pleased that local resident Sarah Kirk was the chosen applicant.

“Sarah and her family are long time residents of Great Falls,” he said, and have already demonstrated their commitment and concern for the community over the years.” Canis also said that having Kirk as the new resident curator “puts a spotlight on public service” and continues the tradition of community involvement begun by the Turner family.

“We are also looking forward to the immediate impact that Sarah’s residency will have on our community,” Canis added. “For the first time in a long time, it will be lights on, grass cut and livestock once more at Turner farmhouse!”

Kirk, who owns a property nearby, will be bringing her livestock, along with numerous family pets, with her when the family makes the move.

“It’s been 2 ½ years in the process,” said Kirk before the signing. “It’s scary, but exciting. I can’t wait to get started and to have you all see what we make of it.”

One of the reasons behind Kirk’s decision to apply for the lease was her desire to redevelop one of the property’s building into a “bereavement retreat center for kids and families.”

Kirk’s own daughter died by suicide five years ago, and the family found comfort through bereavement support. They have since organized the Becky Love Foundation, named for Kirk’s daughter, to bring that comfort and support to others.

With the Turner Farmhouse Foundation, the family will work to create Morning Star Retreat on the property for weekend gatherings, workshops, and “just be someplace where people can reflect and find healing in a peaceful place.”

Successful applicants for FCPA leases must pass vigorous vetting, including proof that they can handle the significant financial demands of rehabilitating and maintaining a historic property. Any plans for the work must be approved by the FCPA and are also offered for review by local stakeholders, like the Great Falls Citizens Association.

THE COUNTY is responsible for handing the property over in a plumbing and electrical condition that meets the standard for a residential-use permit. Kirk and her foundation will have to shoulder the financial burden to do the same on the proposed retreat center, as well as cover the rehabilitation, the utility, tax and insurance costs for the house and property and any other improvements, including landscaping.

Even with no rent or mortgage to pay, that’s a lot to come up with. Kirk acknowledges with gratitude the assistance of many who are donating time and other resources to the long-term project, including the folks at Foxcraft Design Group. “So many people helping, so many people to thank.”

(There are more historic properties waiting for their chance at restoration. Search “Resident Curator Program” on the www.fairfaxcounty.gov website to learn more.)