Long day for workers at the polls. 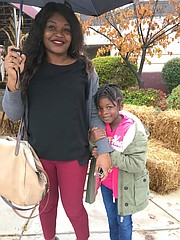 Patricia Ohbah brought her daughter Irenosen Akhigbe with her when she voted, so she could learn about the process. 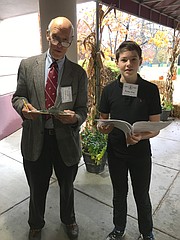 Tuesday morning’s weather was not the best for getting out early, rain, cold, even mist filled the air as Election Day polls opened in Potomac.

That did not deter early voters at Potomac Methodist Church Parish Center at the corner of South Glen and Falls roads.

Ed Edmundson said he was first in when the polls opened at 7 a.m.

He was most interested in the Maryland governor’s race and that for Montgomery County Executive.

There was a sense of bipartisan cooperation as Republican and Democratic volunteers set up booths in front of the Parish Center, greeting each other from opposite sides of the entrance.

“We are here to greet voters,” Republican volunteer Linda Ridenour said. “I don’t care which side of the line you are, it's just important to vote.”

“I hope the rain doesn’t make a difference in Maryland and across the country,” he said.

Voter Shobha Upuluri was very definite when asked about the issues she considered most important this year. “Not Republican,” she said. “Certainly [there is] not any other issue.” Upuluri said she is concerned about the tone of the rhetoric in the country.

Inside church member Janet Aris set up a hospitality table with coffee, water and sweets for voters. “It really in exciting to see people walking in to vote on the day,” Aris, who voted early, said. “It’s a gray day, I hope that doesn’t deter people.”

Sasha Biderman, 12, accompanied her father to the polls. “It was cool,” Sasha said.

Down Falls Road at Potomac Community Recreation Center the same sense of good cheer prevailed as volunteers greeted voters and thanked them for voting. Arriving voters had been steady for the first two hours, volunteer Fran Friedman said.

“It’s been steady, especially with the weather,” she said.

Though Irenosen is way too young to vote, she will vote eventually, her mother said.

“That’s why I brought her,” she said.

Another young person taking part in election day was middle-schooler Matthew Wong. He was working with Bruce Reynolds, an election coordinator, checking to see that the polling place was operating correctly.

“We check the layout and check the procedure to make sure things are going properly,” Reynolds said.

Matt said he liked working on Election Day. This is his second election as a volunteer.

“Two years ago, I helped out at a polling place and found I liked being around even though I can’t vote,” he said.

It will be a long day for Reynolds and Wong. Together they will go to four polling sites checking everything from doors to voting booths, to ensure a comfortable and fair election for county residents.

Due to the Almanac’s press deadline, election results will be available at www.potomacalmanac.com/.