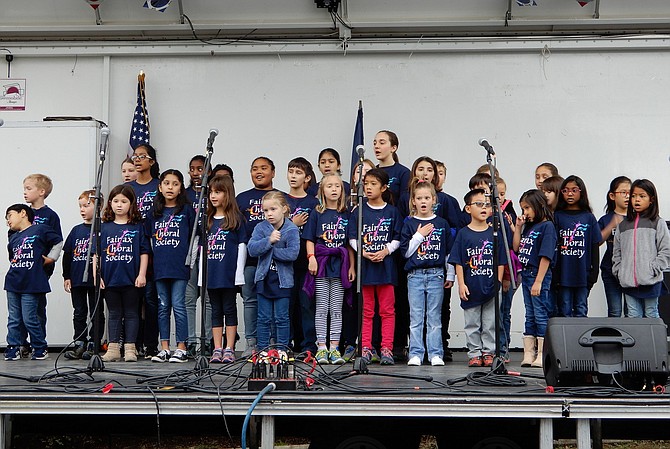 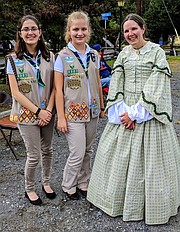 During opening ceremonies of the Oct. 20 Centreville Day celebration, Supervisor Kathy Smith (D-Sully) honored local residents and others for all they’ve done to serve the community. First, though, the Chantilly Academy’s Air Force JROTC presented the colors and the Fairfax Choral Society Youth Choir sang the National Anthem.

“We celebrate Centreville as a diverse, growing and special place,” said Connolly.

Smith recognized everyone responsible for making Centreville Day possible, including American Legion Post 1995, which organized the parade. And Bulova said, “We’re a big community geographically, but events like this make us into a small town.”

Smith then presented the first three awards, while Centreville Day Chairman Cheryl Repetti told the audience why the recipients were being honored. Later that afternoon, Repetti presented the last two awards.

Said Repetti: “The Centreville Day Planning Committee is pleased to each year recognize individuals and organizations in the greater Centreville community who have worked to improve and better the lives of their neighbors and fellow citizens.” The honorees, and Repetti’s comments, were as follows:

“Donna Smith is an enthusiastic and energetic champion of our community,” said Repetti. “She continually finds ways to meet the needs of many different people. For three years, she’s helped organize the annual Centreville International Showcase as the entertainment chair. Donna is also a member of the Rotary Club of Centreville-Chantilly and serves as treasurer.

“As a vice president/branch manager at Sandy Spring Bank in Fair Lakes, Donna has overseen greater participation in Centreville Day over the last four years, culminating in the bank’s sponsorship of the History Train this year. And her enthusiastic volunteering includes ringing the bell for Salvation Army at our local Walmart, while belting out Christmas Carols. Surely, that was the reason a second bucket for donations was needed that day.”

“For 26 years, the Sully District Station has supported Centreville Day,” said Repetti. “It’s provided officers to patrol Centreville Day on bikes and foot, has closed the roads to keep pedestrians safe from vehicles, has participated in the parade, and gamely coped with the 1,001 unexpected problems an event such as Centreville Day presents.”

She also stressed that Capt. Dean Lay, the station’s commander since September 2016 – and his immediate predecessors, Capts. Bob Blakley and Ed O’Carroll – all enlarged that tradition of support by participating in and helping expand the Centreville Day Safety Expo.

Being feted, as well, were three, Sully District Station police officers who have worked in liaison with the Centreville Day Planning Committee. “These officers – Capt. Ryan Morgan, Sgt. John Turner and MPO Sabrina Ruck have each gone above and beyond their assigned duties and become enthusiastic, creative members of the Centreville Day team,” explained Repetti. “Knowing that Capt. Morgan and Sgt. Turner are moving on to new assignments has motivated the committee to recognize their contributions, the contributions of their colleagues and the leadership of Commander Lay and his predecessors. We can’t thank the Sully District police enough for their support.”

A lifelong resident of Centreville, Claudette Ward has given many hours of service to her community. She was president of the Ladies Auxiliary of Station 17’s Volunteer Fire Department, has been a leader in her church, was a member of the Fairfax Center/Springfield District Land-Use Committee and is a noted historian.

“She contributes to a number of local historical associations, including the Stuart-Mosby and the Fairfax County historical societies and the Historic Centreville Society (HCS),” said Repetti. “As a member of HCS’s Board of Directors, Claudette has remained steadfast in keeping the organization focused on its mission to educate the public about Centreville’s history.

“Toward that end, she’s written many articles based on her careful research into her family history and the history of the Centreville area. Many of her articles can be found in issues of the HCS newsletter, The Millrace. And in 1992, Sully District Supervisor Michael R. Frey named Claudette Ward as the very first Lady Fairfax from the Sully District for her contributions to local history and for her efforts toward historic preservation.

But that’s not all. Repetti said that, “On Claudette’s 80th birthday, Ed Wenzel – one of her compatriots in preservation struggles – said Claudette has ‘always been among the first responders on historic-preservation issues, be they at Centreville, Ox Hill, Fairfax or elsewhere, including cemeteries, historic buildings and earthworks. She has been a tremendous advocate for the preservation of Fairfax County’s heritage. She is a gracious and beloved lady and a treasure to all.’” Therefore, said Repetti, “It is our privilege to honor Claudette Ward for her lifetime achievements in historical research and preservation.”

Twin sisters Lauren and Elizabeth Bradshaw received a $500 grant from the Friends of Historic Centreville for materials used to preserve the Orr Family cemetery. Working with local historian Claudette Ward, plus Mary Lipsey of the Fairfax County Cemetery Preservation Association, the sisters cleared the overgrown and largely forgotten grounds.

Doing so revealed the modest, unmarked fieldstones that were used to indicate some 12 burial sites dating back to at least 1795, when John Orr – a supporter of the American Revolution and a trustee of the town of Centreville – died.

“The girls built a modern path through the cemetery to keep people from stepping on the small, head and foot stones and planted periwinkle, sometimes called ‘cemetery ivy,’” said Repetti. “An evergreen, periwinkle was planted in cemeteries as a symbol of eternal life. The Friends of Historic Centreville are pleased to see two young people undertake a historic-preservation project that will enhance the life of their community.”

The sisters did the work for their Girl Scout Silver Award project after discovering the cemetery in their Gate Post Estates community in Centreville. “The cemetery belonged to John D. Orr, who was a patriot and soldier in the 7th Virginia infantry in the Revolutionary War,” explained Lauren. “He lived on a plantation in what is now our neighborhood and donated over 200 acres of land to present-day Centreville.”

The twins cleaned out and preserved the cemetery and, during Centreville Day, they and various dignitaries rededicated it. Prior to that event, Lauren said, “This ceremony will act to reinstate this cemetery, and we hope it will not fall into such disrepair again. Orr was a founding member of Centreville, and we feel that his cemetery should not be forgotten.”