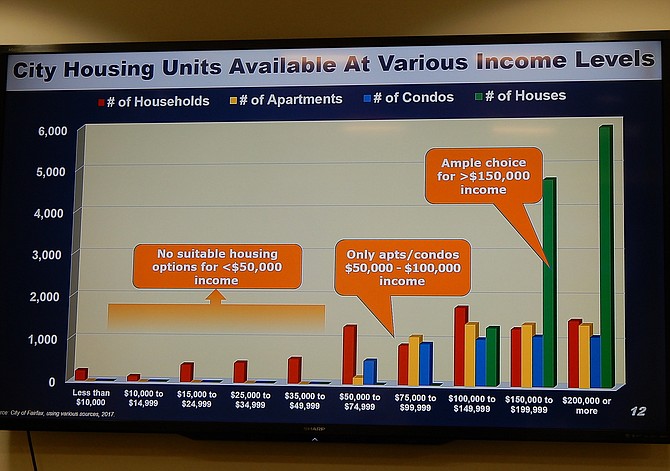 This chart shows the types of homes available to people at different income levels in the City of Fairfax.

When it comes to affordable housing, the City of Fairfax is definitely deficient. And how it addresses this problem will determine who can afford to live here, now and in the future.

Toward that end, the Mayor’s Advisory Committee on Housing was convened in May 2017. Its task was to evaluate the types and quantity of existing homes affordable to senior citizens and people with disabilities.

It was also to consider how to preserve affordable housing, project its need over the next 20 years and make recommendations for the City’s 2035 Comprehensive Plan. On Oct. 9, the Committee presented its report during a City Council work session.

Fairfax City’s area median household income (AMI) is currently $110,300. And although it has plenty of mid-range and high-end single-family homes, the supply of housing affordable to households earning below 75 percent AMI ($82,775) is extremely limited. As a result, teachers, public-safety, healthcare, service-industry and restaurant employees are hard-pressed to find places to live here.

“If you’re a household earning less than $75,000 in this City, you can’t afford to live here,” said Committee member Jim Gillespie. “And when whole segments of your workers can’t live here, that’s a significant problem.”

OLDER ADULTS comprise more than 16 percent of Fairfax’s population and are its fastest-growing age segment. And the lack of affordable housing for them is projected to intensify. Furthermore, according to the report, nearly 30 percent of City households earn only half the AMI, qualifying 33 percent of the students in City schools for free and reduced-price lunches.

Fairfax also has the highest percentage among Northern Virginia jurisdictions of residents earning less than $25,000/year, most likely attributable to a higher proportion of senior citizens with fixed incomes. In addition, the report noted that 27 percent of City households have housing and utility costs exceeding 30 percent of household income.

“If people have a health crisis or lose their job, they’re likely to lose their house,” said Committee member Betsy Bicknell. “And some people crowd – meaning more than one family living in an apartment or condo.”

A spring 2017 study by United Ways of Virginia said that, despite working and earning well above the federal poverty level, 29 percent of City households didn’t earn enough to cover basic life necessities. Often, they must choose between paying bills and feeding their families – and when they reach a tipping point, they can no longer keep a roof over their heads.

“Over 50 percent of people who are homeless have jobs,” said Louise Armitage, the City’s Human Services coordinator. “Many of those who live at the Breezeway Motel don’t earn enough to pay the first and last month’s rent to get an apartment. What matters is the magnitude of the problem, and the City of Fairfax hasn’t done its share in addressing housing affordability.”

The Committee’s report concluded that, based on the need for it, the City has a current deficit of more than 500 affordable rental units. And it’s projected to need an additional 241 housing units dedicated to senior citizens, 111 homes dedicated to people with disabilities by 2042, plus 370 more affordable housing units by 2035. That’s a total of 1,222 affordable homes needed, over the next two decades, so the Committee recommended the City do the following:

During the Council work session, Armitage listed five local churches interested in providing some affordable housing, and Councilwoman Janice Miller noted the possibility of including senior housing in the Willard Health Center.

Brooke Hardin, the City’s director of Community Development and Planning, said he and Armitage are meeting with the county to learn how many affordable housing units are needed at that site for the county to consider it a viable success. And, added Armitage, “The proliferation of townhouses isn’t beneficial to senior citizens.”

“We live in only 6.3 square miles,” said Councilwoman Jennifer Passey. “So how does the Housing Trust Fund option work? Are there builders who do affordable homes, and how can we get them here?”

“We haven’t yet defined how best to use the Housing Trust Fund,” replied Armitage. “The City of Falls Church is half our size and population, but it identified many different types of affordable housing options and developed some creative ways of carrying them out.”

Passey then asked if there’s a priority re the types of affordable units needed. “We have to do it all, or we’ll never get to 500 new, affordable units,” answered Bicknell. “And we better not lose our existing affordable housing – including affordable, single-family homes and duplexes. That’s number one.”

Councilwoman So Lim asked about the 9-year waiting list for Section 8 housing vouchers for financial help. “We’re hoping that list will open in January, for a brief time,” said Armitage.

Councilman Sang Yi asked what effect that work session would have, and Mayor David Meyer said the statements would be integrated into the Committee’s report. Then the report, its goals and recommendations will be incorporated into the City’s draft Comprehensive Plan. And both the Planning Commission and Council will review and comment on the Plan before it’s adopted.

“We have promises of 24 affordable units at Fairfax Gateway and 24 at Scout on the Circle,” said Bicknell. “Meanwhile, we had 110 [affordable] units demolished at Oak Knolls. We’re going backward. We’ve set goals before, and we’ve still made no progress. We need developers to make a commitment to putting in affordable housing and working with nonprofits to make it happen.”

ARMITAGE then showed a slide detailing exactly where and how many – 347 – affordable housing units have either already been lost to redevelopment in the City or are expected to be wiped out by future development here.

Bicknell said it makes sense for people who work in Fairfax City to be able to live here. Trouble is, she explained, “We have a lot of low-paying jobs in the City and many people living here who don’t make much money.”

“About 40 percent of the homeless people counted in January are children,” said Committee member Dorothy Sorrell. “We’re asking affordable housing be included in the Comprehensive Plan as a priority. Citizens surveyed here listed affordable housing as their number-one concern.”

“Your charge is to do your job in the best interests of the citizens,” she told the Council members. “And when they say affordable housing is their priority, you’d better listen.”

Miller said Council should ask City staff to develop a plan “based on this report and implement it. That way, we could have an ordinance to adopt. We should have measurable goals and review them yearly.

“Market forces are moving forward,” said Meyer. “And if we’d contributed some money to our Housing Trust Fund each year, we could have saved the affordable housing units at the Cardinal Court Apartments. Our economic growth in the future will be impeded if we don’t address our affordable housing problem.”

“This is about our community and who we are,” said Councilman John Stehle. “My family and I wouldn’t be here if we couldn’t find an affordable house.”

Meyer then acknowledged the “countless, extra hours” Armitage, the Committee and planner Eric Forman devoted to this report. Sorrell replied that it was “an act of love for our community and neighbors.”