‘Peter and the Starcatcher’ at St. Stephen's & St. Agnes
Votes

‘Peter and the Starcatcher’ at St. Stephen's & St. Agnes 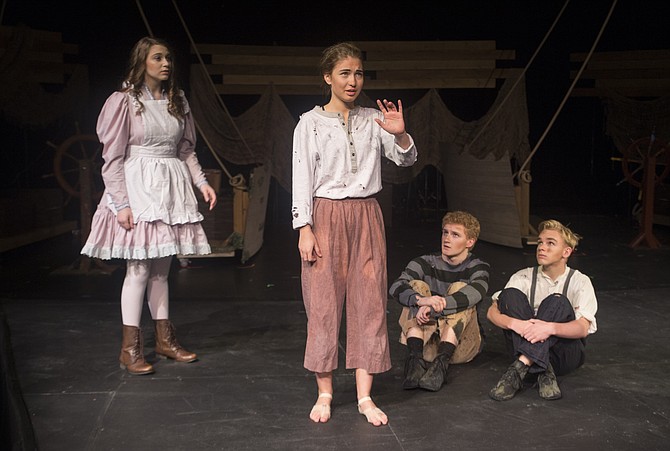 Avast! A storm's a-brewing, me maties, on the slippery stage of St. Stephen's & St. Agnes School as "Peter and the Starcatcher" takes to the high seas! Three orphans, two ships, and one trunk full of starstuff cause more excitement than a crocodile found swingin' in yer hammock.

Who was Peter Pan before he became The Boy Who Wouldn't Grow Up? Based on a 2004 novel, Rick Elice's play tells this story through a swash-buckling script. "Peter and the Starcatcher" premiered in 2009 at University of California, San Diego and sailed on to win five Tony Awards in 2012.

This prequel begins as Molly Aster, an eager apprentice starcatcher, is sent aboard a ship named the Neverland as her father, Lord Aster, embarks on the Wasp. His mission: to destroy a trunk of magical starstuff so that it will not fall into the hands of Britain's enemies. When the trunk is secretly swapped out and brought aboard the Neverland, Molly and a bitter, nameless orphan boy must protect it from the egotistic, ditsy pirate, Black Stache. As non-stop adventure emanates off the stage, the boy journeys to realize that "there's more important things in this world than saving your own neck" and the audience discovers how he becomes Peter Pan.

Cast off! Rather: cast, don't get off the stage! The entire cast created a ceaseless exuberance that brought the play full sail. Whether executing narration or pantomime, the players didn't skip a kitchen-timer's tick.

Bette Vajda portrayed Peter with sincerity in her every action and emotion, as evidenced whenever her right hand would start to jitter. Molly Aster came to life through the strong performance of Julie Newman who expressed a girl-of-action and good-hearted intelligence. Mary Margaret Lehmkuhler fully immersed herself into her role of the crazy Black Stache, bouncing back and forth from cracking jokes with swag to playing the angry guy. Lehmkuhler impressively held Stache's drawling accent throughout.

Two other memorable characters are Ted (who is obsessed with food) and Prentiss (who is obsessed with being the leader) played by Fred Gehlhoff and Andrew Seale respectively. As Peter's fellow orphans, Gehlhoff and Seale conveyed character development, commitment, and comedy. Also providing laughs, Jackson de Vallance played the pining sailor Alf with a humorous physicality.

All hands on deck! The decked-out set (by Skye Schofield-Saba, Emma Hughes, and Zak Zeledon) caused the story to set sail. The two ships cleverly lay side by side, one on either half of the stage. The set pieces were detailed, with barnacles and shaded wood, and conveyed the shabbiness of the Neverland versus the spiffiness of the Wasp.

The production technically radiated the enchanting atmosphere. Soft, blue lighting echoed the ocean's prominence in the play and rotating yellow lights indicated magic. The sound (by Zachary Gaydos and Abbie Henshaw) was fabulous. Differently themed, live music played at different times to tie in with what was happening on stage, such as flute playing while Peter had a wistful monologue. The music and the mics, delicately balanced, didn't overpower the actors for the most part. One inventive sound effect was the crocodile's roar, created by manipulating a recording of people yelling simultaneously. Many ambient sounds transported the audience into the settings of the play, whether the tropical jungle, the seashore, or atop the ocean's waves.