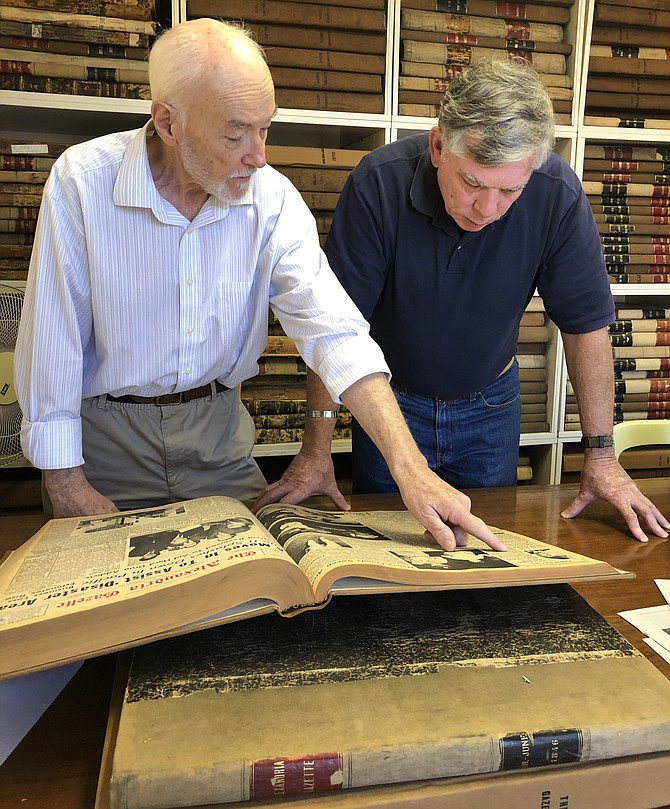 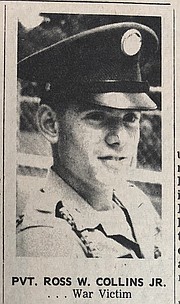 The death notice of Ross Collins was published in the Alexandria Gazette on April 8, 1969. 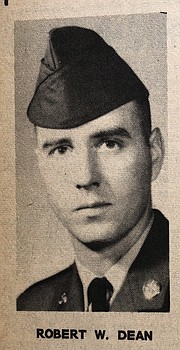 Funeral services for Robert Dean appeared in the July 23, 1969 edition of the Alexandria Gazette.

“I never realized it would be so difficult to track down these photos. With today’s technology, we take for granted the ease with which we can gather information.” —Vietnam Veterans researcher Michael McMorrow 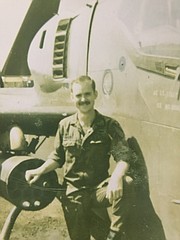 1st Lt. Lawrence Lilly, shown in an undated photo, is one of seven Alexandrians still considered a POW/MIA from the Vietnam War. He was shot down over Cambodia in March of 1971 and the Friends of Rocky Versace hope to add Lilly’s name to the memorial plaza in Del Ray. 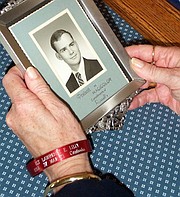 Alexandria resident Jeanette Lilly holds a photo of her son, 1st Lt. Lawrence Lilly, who was shot down over Cambodia in 1971 and is still considered a POW/MIA. The Friends of Rocky Versace hope to add Lt. Lilly’s name to Alexandria’s Memorial Wall in Del Ray.

Michael McMorrow was a man on a mission. Along with Kevin Rue of the Friends of Rocky Versace organization, the retired government lawyer and freelance writer has been working to locate photos of each of the 67 of Alexandria’s fallen from Vietnam.

“We asked the public to help search through yearbooks, family photo albums and newspapers in an effort to locate photos of those still unidentified,” Rue said. “We made great progress, but still had two photos that we were unable to obtain. Mike did some detective work and ultimately found those photos in the archives of the Alexandria Gazette newspaper.”

McMorrow’s efforts, which located photos for Pvt. Ross Collins and Sgt. Robert Dean, completed the Faces Never Forgotten project for Alexandria. Current records indicate that of the 50 U.S. states, four U.S. Territories and Washington, D.C., 19 of these 55 have yet to locate all photos of their Vietnam fallen veterans.

“I knew that Robert Dean had graduated from Mount Vernon High School in 1967,” McMorrow said. “But his yearbook only mentions his name — there is no yearbook photo. I even tracked down the class president, who remembered Dean, but had no idea why his photo is missing from school records.”

McMorrow researched the database of the National Personnel Records Center, but still came up empty. With only the date of death to work with, he poured through the archives of the local newspaper to look for obituary information. For both Dean and Collins, McMorrow obtained the articles and photos that were published when each of the servicemen were killed in Vietnam.

“In hindsight, I suppose this should have been my first stop,” McMorrow said. “But I never realized it would be so difficult to track down these photos. With today’s technology, we take for granted the ease with which we can gather information.”

Photos of Alexandria’s fallen will appear online at VVMF’s Wall of Faces as well as on permanent display at the future Education Center at The Wall, scheduled to open in 2020.

But Rue said there is still work to be done.

“Of the 67 names inscribed at the Capt. Rocky Versace Memorial Plaza, we only have family contact information for about 20,” said Rue, who is working to track down family members of Alexandria’s fallen. “The Department of Defense issued Certificates of Honor to each of these Gold Star families as part of the 50th anniversary commemoration of the Vietnam War. As we track down a widow, parent or sibling, we hold a ceremony for them and hope to one day have all families accounted for.”

Rue is also working to get approval to add one more name to the Rocky Versace Memorial – Lawrence E. Lilly, an Army 1st Lieutenant who was shot down over Cambodia in March of 1971. He would make the seventh POW/MIA from the Alexandria area.

“Larry was the son of a career U.S. Air Force officer and his widowed, Gold Star mother Jeannette and younger sister Susan still live in Alexandria,” Rue said. “But because he was a military brat, his address of record is Los Angeles. But he was a local resident and as with all of our veterans, we need to recognize his service and sacrifice.”