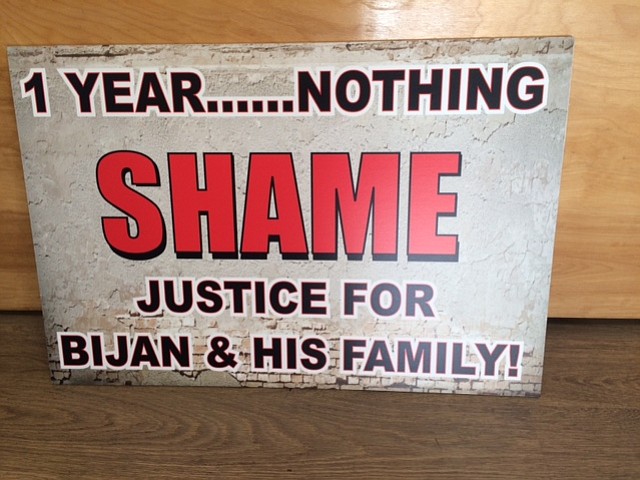 Sign created by Kevin Bergen for protest on Saturday, Nov. 17.

This time last year, then-25-year-old Bijan Ghaisar had a lot to look forward to: Thanksgiving, the approaching winter holidays, the start of a new year. Beyond that, all signs pointed to a promising future. Yet, on the otherwise insignificant evening of Friday, Nov. 17, 2017, two United States Park Police officers brandished their guns and shot Ghaisar nine times following a car chase on the George Washington Memorial Parkway.

Gaisar died 10 days later, on Monday, Nov. 27, 2017, and his death continues to grip the public. The FBI took over the investigation, yet there has been no word on whether or not charges will be brought against the unnamed officers who gunned down the unarmed Ghaisar. Despite the release of dash cam footage of the incident and forthcoming eyewitnesses, much about this local young man’s tragic encounter remains a mystery to the community.

One outraged member of the community, Kevin Bergen, is still reeling from the FBI’s failure to draw any official conclusion.

“While I did not personally know Bijan, this whole situation has really bothered me,” Bergen said. “There has been continuous coverage, and what I’ve found most interesting is that a slew of politicians – including Don Beyer, Gerry Connolly, and Tim Kaine – have requested information, but they were basically told to butt out. So, all this time, I’m thinking, ‘Wait a minute. With the terrible lessons we’ve had to learn about police accountability, nothing is being told to this family.’ I really do not understand.”

Beyond frustrated with the system and how it has continuously failed Ghaisar’s family, Bergen is staging a protest on the one-year anniversary of the shooting, on Saturday, Nov. 17, from 12 to 1 p.m.

“I can walk from my house to where he was shot,” Bergen said. “I have a pretty good-sized sign made that reads ‘Justice for Bijan and his family,’ and I’ll walk across Alexandria Avenue with it. I wouldn’t mind stopping traffic and drawing attention to the lack of accountability in this case.”

Bergen knows that plenty of other people are up in arms over this matter, and he hopes that at least a few will join him.

He added that the protest precedes a vigil for Ghaisar that will take place at the Lincoln Memorial on the same day from 6 to 8 p.m. This vigil is hosted by the group, We Are Bijan, which has for the last year been demanding conclusions from the ongoing investigation.

Bergen is a 26-year veteran of the United States Air Force and a 15-year veteran of law enforcement, and in his opinion, there is no excuse for the FBI’s silence in this case.

“I will give you that the FBI has a full plate, but they were still able to conduct a full investigation of a Supreme Court nominee in less than a week,” he said. “Here, we know who the shooters were, we have eyewitnesses, and the FBI also has the Fairfax County Police’s video of the shooting. But, his family is still in the dark about what really happened. This is not the FBI I want to support. They’ve had almost a year. Do they think this is just going to go away?”

For more information about the protest, contact Bergen at 703-786-5833 or kevinbergen40@gmail.com.