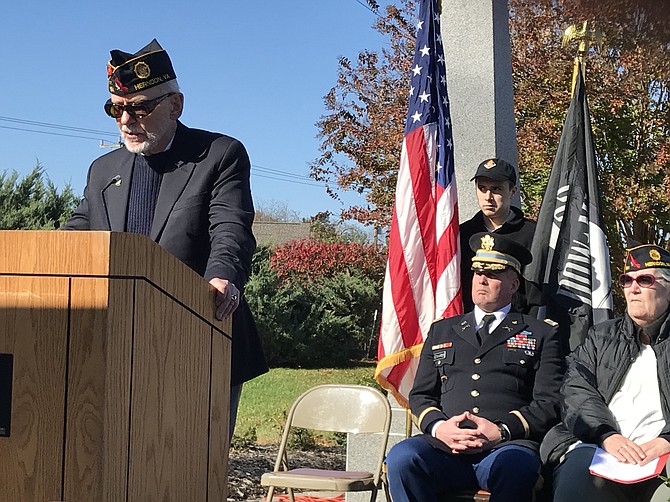 Kathleen Gohn, singer and vice president, Patrons, The Reston Chorale Board of Directors, says: "The Reston Chorale, which includes singers from Reston, Herndon, and surrounding communities, is honored to participate in this Veterans Day Observance as we pay tribute to the men and women who answered the call to serve and defend our nation.” 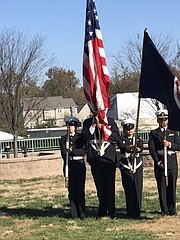 The Navy Junior ROTC of Herndon High School presents the colors at the 2018 Veterans Day Ceremony.

In a celebration of the unyielding service by United States Veterans and to commemorate the 100-year anniversary of the end of World War I, The American Legion Wayne M. Kidwell Post #184 Herndon/Reston sponsored a ceremony with the Town of Herndon on Sunday, Nov. 11 at 11 a.m. Held at Herndon's Veterans Memorial on the Town Green, the morning service drew veterans, dignitaries and citizens from Herndon and neighboring communities.

During the ceremony, Herndon High School's NJROTC presented the colors and Reston Chorale sang the national anthem. Boy Scout Troop #1570 participated in the program of events, as did Lisa Merkel, Town of Herndon Mayor and various members of Post 184 Herndon/Reston.

In his Welcome Address, 1st Vice Commander Bob Thompson related how Nov. 11, 11 a.m., marks the date and time when the armistice or temporary cessation of hostilities between the Allied nations and Germany went into effect ending "the war to end all wars.” He told how in 1938 Nov. 11 became a legal holiday in the United States called Armistice Day, meant to honor veterans of World War I but at the urging of veteran service organizations after World War II, the 83rd Congress struck out the word 'Armistice,' replacing it with the word 'Veterans.'

GUEST SPEAKER, Col. Edwards shared stories with the assembled crowd which illustrated "all the incredible things that your current Veterans across the armed forces are doing to protect this nation across a spectrum of conflict, from major combat operations to supporting our civil authorities back here in the homeland."

Edwards told how when he arrived at Fort Riley in 1991, he was led by Veterans of Operation Desert Storm who recounted their experiences describing the rapid pace that the joint team was able to defeat the Iraqi Army. "I was impressed by their confidence, their competence and proud to be among them. We came out of that engagement to a time of relative peace." He noted how they would become the bedrock of a generation of veterans that would lead the United States in its next time of conflict, a decade later.

9/11 was a different threat than Desert Storm. Edwards said it didn't adhere to laws of armed conflict. Instead it "drew its strength and sanctuary behind civilian populations." He related how he watched the 75th Ranger Regiment depart darkened airfields to conduct one of the first airborne operations in Afghanistan. "These talented individuals pursued our terrorist foes across Afghanistan and Iraq … They were and are highly proficient."

Edwards narrated how the conflicts in Afghanistan and Iraq required adaptation in general purpose forces. Veterans "became masters of counter-insurgency operations, by gaining the confidence and trust of the civilian population to displace threats and eliminate support. … Savvy, young lieutenants and sergeants first class were responsible for areas of operations that would have been covered by colonel to general officer level commanders in previous wars. … These Veterans were amazing problem solvers, able to bridge cultural and language barriers, understand context and demonstrate incredible levels of critical thinking," he said.

Edwards described times when threats come in different forms, like natural disasters. He cited how Veterans who have served in conflicts, both active service and National Guard, perform amazingly in support.

"In the past two hurricane seasons, we have seen the devastating power of these storms and the fantastic work that our service members perform to assist our nation's first responders in restoring safety and stability to our local communities. … I can't tell you how much I appreciate the capability of our armed forces and how proud I am to serve among them."

Following his remarks, Edwards and Thompson laid memorial wreaths at the foot of the Herndon's Veterans Memorial, a tall grey obelisk that is the half-size replica of the famous Herndon monument at the U.S. Naval Academy in Annapolis, Md.

IN CLOSING REMARKS, Thompson thanked leaders and organizations for their support and invited them to the Municipal Center where the Herndon's Woman's Club would be serving refreshments.

Thompson also reminded all that Wreaths Across America is Dec. 15. There would be a National Remembrance Ceremony at Chestnut Grove Cemetery in Herndon followed by wreaths laid at the 700 plus Veteran graves.