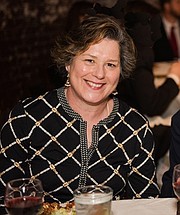 Patricia Sarah Gibson — known to her family and friends as Trish — died on Oct. 27, 2018 at age 63 from a rare form of cancer. She died peacefully at the home of her daughter in Boulder, Colo., surrounded by her family, her final wish.

Trish was born on July 28, 1955, in Rockville Centre, N.Y., daughter of the late Francis S. Murphy and Patricia Blazey Murphy. The family moved to Washington, D.C., in 1967, where Trish graduated from Wilson High School and attended American University. She and her husband, Campbell (Cam) Gibson, were married in 1979, and, except for four years in Riyadh, Saudi Arabia (1979-1981 and 1993-1995), made their home in the Alexandria area of Fairfax County.

Trish was active in numerous community and school activities, starting with the Junior Friends of the Campagna Center in Alexandria, where one year she was in charge of the Scottish Christmas Walk Parade. Subsequently, she volunteered for the United Community Ministries (UCM) in the Mt. Vernon area, where she co-chaired the Capitol Steps fundraising event for many years. At West Potomac High School, Trish was president of the parents’ association for the Wolverine marching band. She worked for 14 years at the American Horticultural Society in various positions and retired as director of Buildings and Grounds. Her last volunteer activity was at the USO at Fort Belvoir. Trish’s other interests and hobbies included gardening, knitting, bowling, and her 9:30 class at Trident CrossFit. She had a lifelong fondness for England, especially inn-to-inn walking tours.

Trish was known to her many friends for her warmth and generosity and for helping others in times of need. She was a wonderful wife, mother, and grandmother. In recent years, she doted on her four young granddaughters (the “Grand Girls”) and loved knitting for them and did Facetime with them nearly every day.

She is survived by her husband, Cam, of Alexandria; by her daughter Nicole Christensen, son Trevor Gibson, son-in-law Eric Christensen, daughter-in-law Maura Dudley, and granddaughters Harriet Christensen, Campbell Christensen, Simone Gibson, and Lilla Gibson, all residents of Boulder, Colo.; and by her three siblings, Dano Murphy of Bethesda, Md., Barbara Murphy of Washington, D.C., and Charlotte Murphy of Mt. Airy, Md., and their families.

A memorial service for Trish will be held early next year. The family requests that in lieu of flowers, contributions in her name be made to the Semper Fi Fund of the U.S. Marine Corps.