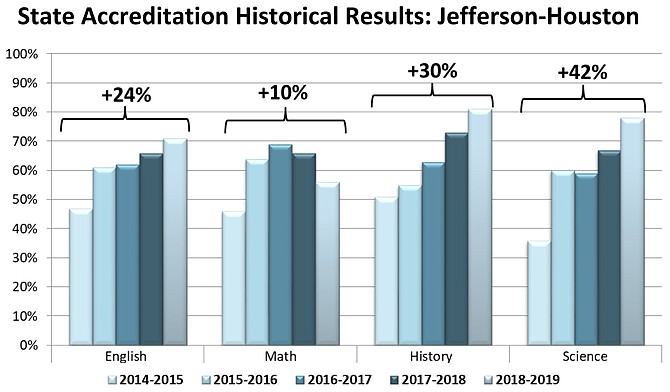 Adjusted Standards of Learning (SOL) testing results show improvements in student performance, even though English and math pass rates still fall short of state standards. Under the state’s new rating system, showing improvement counts toward accreditation. SOL figures are “adjusted” from raw pass rates reported last month. This is because, in determining accreditation, “allowances are made for certain transfer students, students who speak little or no English and students who pass retakes of tests after receiving remedial instruction,” according to the Virginia Department of Education.

Alexandria City Public Schools (ACPS) reports that several of its schools will receive improved accreditation ratings from the state this year, thanks in part to revised, more nuanced accreditation standards.

Each year, the Virginia Department of Education (DOE) rates public schools, depending largely on how students perform on annual Standards of Learning (SOL) tests. SOLs “establish minimum expectations for what students should know” in English (including reading and writing), math, science and history/social science, according to the DOE.

The DOE is expected to publish full accreditation data for the 2018-19 academic year on Thursday, Sept. 27. This data will include schools’ SOL performance from the 2017-18 academic year, but adjusted from the raw pass/fail figures reported last month, according to federal rules.

Based on preliminary information, ACPS reports that 14 of 16 schools will receive full accreditation this year, up from 12 last year. Statuses will improve for William Ramsay Elementary School, Francis C. Hammond Middle School and Jefferson-Houston K-8 School. Jefferson-Houston and T.C. Williams High School will remain subject to DOE review. But, for the first time in several years, no ACPS campus will be denied accreditation outright.

The state’s revised rating system takes effect this year. Whereas the old system included a spectrum of partial or conditional ratings, the new system has only three options: accredited, accredited-with-conditions and denied.

Schools can now receive accreditation not only if they’re “at or above standard,” but also if they’re “near standard or improving” at a “sufficient” pace, according to the DOE. This allows “a more balanced evaluation of schools serving at-risk students,” which previously “were subject to being perceived as ‘failing’ even if most students were making progress toward proficiency.”

The old system considered only SOL pass rates and, for high schools, graduation rates. The new system takes into account a broader array of factors, including achievement gaps between demographic subgroups; absenteeism; and, for high schools, the dropout rate and a measure of college, career and civic readiness.

Last year, Ramsay and Hammond were “partially accredited: reconstituted.” That means they missed the state’s benchmarks for full accreditation four years in a row, and so had to enter into state-approved remediation plans. In the 2016-17 academic year, Ramsay missed the standardized testing pass rate benchmark for science by 23 percentage points; Hammond missed the benchmark for English by five points. But, based on subsequent testing results and under the revised system, both schools will achieve full accreditation this year.

Jefferson-Houston was previously denied accreditation, missing the state’s benchmark for English by nine points, for math by four points, and for science by three points. But this year it’ll bump up to an accredited-with-conditions rating, having met the standard for most indicators, except for certain demographic achievement gaps.

T.C. Williams High School was previously partially accredited, missing the state’s benchmark for math by eight points. It’s still falling short in math, as well as with regard to achievement gaps and graduation and dropout rates. It will receive an accredited-with-conditions rating.

Numerous factors contribute to school improvements, according to Pierrette Peters and Michael Routhouska, Hammond and Ramsay’s principals since 2015. In particular, they’ve endeavored to provide tailored rather than standardized supports to students and families.

“We really formalized data-collection practices, and from that we make all our decisions,” said Routhouska. ACPS tracks students against both academic and behavior measures. Students experiencing the most difficulty receive increasingly more personalized “interventions” from school staff, according to ACPS’s Multi-Tier System of Supports (MTSS). Interventions might involve extra instruction in small groups or one-on-one, or time with a counselor. Educators regularly and collaboratively evaluate student data, working together to structure the best supports.

Interventions also look to the home.

Because of the schools’ diverse student bodies, “we have to reach out to families in different ways,” said Peters. For example, she employs Spanish- and Arabic-speaking parent liaisons, “who do a lot of groundwork with parents,” including touching base weekly. Another staffer aims to improve educational environments outside the classroom for students experiencing the most difficulty — for example, by sending “students home with books … so that the families can also help support reading instruction.” ACPS offers an eight-week program that “works with parents to teach them parenting skills.” Last year, Peters “met with all parents of students who had two or more Fs.” Ensuring student success also involves “teaching parents,” she said.

Sumaira Hanifi, an eighth grader who moved with her family from Afghanistan not long ago, expressed appreciation for ACPS’s approach. She says teachers have worked hard with her to improve her English skills, which may now surpass her native language skills. She says she’s now able to help her mother learn the language, as well.