‘Without Systemic Changes…’ in Alexandria
Votes

‘Without Systemic Changes…’ in Alexandria 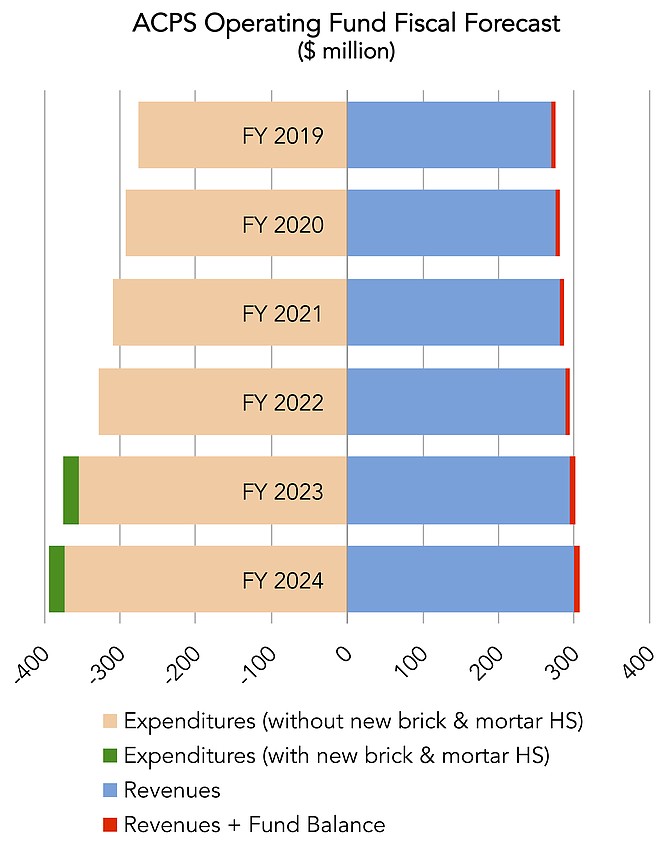 Without increasing per-pupil expenditure or finding additional cuts and efficiencies, ACPS projects budget deficits widening to as much as $95 million over five years.

Alexandria City Public Schools (ACPS) forecasts a $18 million operating budget deficit for FY 2020, widening to as much as $95 million over five years.

“We like to start with the five-year fiscal forecast to set the framework” for upcoming budget cycles, said Dominic Turner, ACPS’s director of budget and financial systems, at a Sept. 6 meeting. The FY 2020 budget season will kick off publicly when ACPS Superintendent Gregory Hutchings proposes his 10-year Capital Improvement Program (CIP) on Nov. 8.

“The bright side here is, we’re at a half-a-million dollar better position than we were as this time last year. But, as you can see, without systemic changes … in the out-years, our deficit worsens,” said Turner. “If we continue to use the maximum allowable fund balance to balance our budget, we’re going to put ourselves in a not-so-good fiscal condition. We won’t be able to react to any unforeseen emergencies, because we won’t have a fund balance to use.”

Starting in FY 2023, staff included a range of operating impacts for an as-of-yet undefined high school capacity expansion project. High and low estimates depend on whether ACPS decides to build an additional brick-and-mortar campus or to expand an existing one. Hutchings will unveil a more specific proposal on Nov. 8.

“This month, we will be engaging principals to better understand each school’s individual needs,” said Turner. “These efforts are to help curb or eliminate our need to ask the city for more and more revenue each year.” In particular, ACPS will consider “ways to contain our healthcare cost. This is a huge impact on our on budget.”

Hutchings also suggested exploring “innovative” incentives, rather than only boosting the budget, to attract and retain staff — for example, partnerships with developers to discount teacher rents, or vouchers for staff to use Metro or the city’s DASH bus system.

The School Board expressed interest in pursuing such options, but not in lieu of a higher per-pupil funding allocation from the city.

Looking for alternatives might become a “stalling tactic,” said School Board Member Cindy Anderson. “We want an increase and we want to pursue these other things, as well. Always the ‘and’ [rather than ‘or’].”

School Board member Chris Lewis wants to discuss the subject with city council “sooner rather than later.”