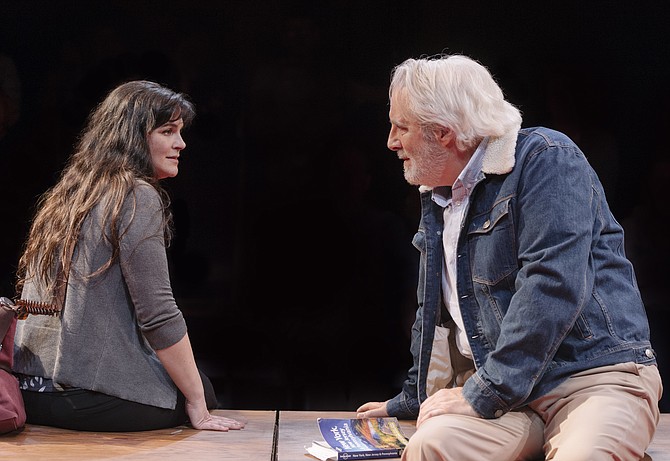 Rachel Zampelli (Georgie) and Michael Russotto (Alex) star in the D.C. premiere of “Heisenberg” at Signature Theatre in Arlington. Photo by Cameron Whitman

A chance encounter at a London train stop changes the course of life for two people in this hit Broadway play by playwright Simon Stephens now at Signature Theatre in Arlington. After mistaking him for someone else, Georgie finds herself improbably drawn to the much older Alex. Their instant connection ignites a tender, funny and intimate journey. Using a minimalist set, with the focus on the acting, the play is directed by Joe Calarco.

The show runs from now through Nov. 11.

Rachel Zampelli is playing the role of Georgie, with whom she says she has fallen completely in love. “She is a joy and a nightmare ... like most of us. She is layered. She is not what she seems at first. She’s terribly honest (except when she’s not...),” she said.

As hilarious as the play is, she said, “Heisenberg” deals heavily with loss and loneliness. “I think we’ve all been there or are there. But the lovely thing about this show and our production, I think, is that it leaves us all feeling a little less isolated for having those kinds of feelings and experiences. It’s hopeful. I think we could all use a little bit of hope, right? I’d really love everyone to leave each performance with that,” she said.

She added: “I think my biggest challenge has been the lines! I have a lot of them. A lot of them and Georgie talks extremely fast — so, I started preparing months ago and continue to run them literally every day before a performance.”

Michael Russotto is playing the role of Alex Priest, a septuagenarian Irish butcher living in London. “He's pretty much alone in the world — all of his family is deceased at this point in his life. He's quiet, a loner, is by himself most of the time, whether at work in the butcher shop, which he runs solo, or at home in a big empty house, too big really for one man,” he said. “He does have a rather vivid inner life of the mind. He is passionate about all forms of music, and he listens to music constantly. He also sees and speaks to his dead sister every day. He's a creature of habit, set in his ways, not expecting any real disruption in the routine of his life. He's lonely.”

He said that physically it is challenging for him to realistically portray a man who is in his 70s (“I'm a bit younger!”). “The key, I think, is specificity, picking a few physical character traits to focus on, and not doing too much. In particular, I work on Alex's walk, and generational habits — like slightly hiking up his trouser legs before sitting. I might also say that cultivating a realistic Irish accent that is also intelligible to an American audience is a challenge of the play and of this particular role,” he said.

He added: “Finally, I would add that it is of vital importance that Alex be an active listener. He's a quiet man, especially at the beginning of the play, but he absolutely must be listening and absorbing and thinking when he's not speaking. He must be constantly present.”

As far as audience takeaways, he said: “I hope people will have a lovely, intimate evening in the theatre, and that they will embrace these two flawed human beings, Georgie and Alex, take them to heart and cherish them. I hope the play will inspire those who see it to make connections with other people (especially unlikely people quite different from themselves), difficult as that may sometimes be.”

Signature Theatre is presenting “Heisenberg” from now through Nov. 11. Show times are Tuesday through Sunday evenings at various times.; Saturday and Sunday matinees at 2 p.m. Tickets are $75 to $89. Specialty Nights are: Discussion Nights on Oct. 16 and 24; Pride Nights on Oct. 12 and 26; and Open Captioning Night on Oct. 28 at 2 p.m. The venue is located at 4200 Campbell Ave., Arlington. Visit www.sigtheatre.org.