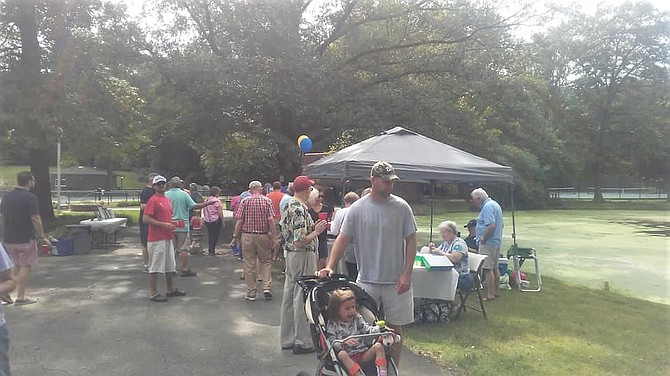 Sunday, Oct. 7, was a sunny, picturesque 85-degree day in Alexandria which provided the perfect backdrop for a community celebration. The Hollin Hall Village Citizens Association hosted a celebration for current and former citizens to acknowledge the 75th anniversary of the community’s establishment.

The event was held at Mount Vernon Park Association and featured locally owned food trucks, neighborhood band Close2Home, activities for children, and a display of proclamations and acknowledgements from local politicians, U.S. Senators Tim Kaine and Mark Warner, and an insert in the U.S. Congressional Record sponsored by U.S. Rep. Don Beyer.

Today, Hollin Hall Village is a vibrant community of approximately 700 single family homes and local businesses. Hollin Hall Village contains two shopping centers with community staples, specialty stores, and a senior’s center which are all within an easy walk for all residents. There is also a baseball field which is the home field to many neighborhood children.

The health of a community can be judged through its level of civic engagement. The Hollin Hall Village Citizens Association consists of local citizens who volunteer to serve their community and represent their neighborhood at district meetings and participate on county boards and committees. Hollin Hall Village continues to uphold and preserve its small-town environment, while continuously remaining involved with the issues impacting the future of their district, county, and the Commonwealth of Virginia.

The writer is vice president of Hollin Hall Village Citizens Association’s Board of Directors.