Trone “may miss a few days” of the campaign. 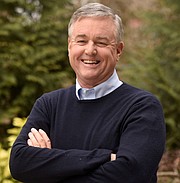 David Trone, Potomac resident and Democratic candidate for Maryland’s Sixth Congressional District seat, issued a statement Monday, Aug. 27, sharing news that he had been diagnosed with a cancerous tumor and is undergoing treatment.

In his statement Trone wrote: “I want the 760,000 residents of the Sixth District and my 7,000 teammates in the Total Wine family to know that I am being treated for a localized cancer. An abnormal lab result at the time of my annual physical exam led doctors to conduct additional tests. On Monday, June 25, it was confirmed that I had a tumor in my urinary tract. Since then, I have undergone chemotherapy treatment at Johns Hopkins in Baltimore, a treatment that has led to a substantial reduction in the size of the tumor.

The next step in the recommended course of treatment is to remove the kidney on that side of my urinary tract. The treatment team members believe my prognosis is positive. They say I may miss a few days of the campaign immediately after the surgery, but nothing will interfere with my being fully engaged as a candidate and as a member of Congress after the recovery.”

A spokesperson for Trone said that surgery is expected to be scheduled for mid-September.

“I am confident I will make a full recovery,” Trone wrote.

“I could not have faced this challenge without unwavering love and unconditional support from June. If anyone is a hero in this, it is June. She has been a rock, just as she has been in over 30 years of our marriage. Our four children have responded as every parent would want: with love, support, encouragement, and good humor since the diagnosis.”

Trone added a further explanation of his medical condition from Dr. Phillip Pierorazio of the Brady Urological Institute and Department of Urology at Johns Hopkins, and the Johns Hopkins Kimmel Cancer Center. In that, Pierorazio said, “David’s prognosis is excellent. He is being treated for a localized cancer of the genitourinary system with chemotherapy and planned surgery. The cancer is localized, and the treatment has been aggressive. The chemotherapy has reduced the size of the tumor, and we foresee no complications from the upcoming surgery to remove the kidney. His underlying health is strong, and he has fully complied with every recommendation of his treatment team. We expect David to fully recover, to return as an active candidate, and, if elected, to carry out all of the duties of a member of the House of Representatives.”

Trone campaign manager Jerid Kurtz said, “David has been fully engaged in all aspects of the campaign during the chemotherapy treatment.”

“This is what I know,” wrote Van Hollen. “David will emerge from this stronger than ever, ready and able to take his message of civility, compassion, and competence to every corner of the Sixth District, and to provide extraordinary public service as a member of the House of Representatives for the foreseeable future.”

Leggett shared his support: “David has been a good friend to Montgomery County, beating every challenge he’s faced to build a successful business that supports countless Marylanders. He will overcome this latest obstacle, and he will go on to serve as an outstanding advocate for all of us in Congress. I’m proud to support David — and I know Montgomery County stands with him, June and their kids.”