CR2 Units allow some children in crisis to be cared for in their own homes.

(Click on "Download .JPG" to see large map.) Chart details the numbers of calls to CR2 in Northern Virginia. 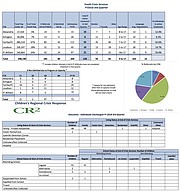 “We have 12 staff to cover Loudoun, Arlington, Fairfax and Prince WIlliam counties, and by the middle of the week we are already full.” — Aminata Conteh, NCG CARE Crisis Stabilization Counselor

”Far too many children — over 300 kids a year – were being unnecessarily hospitalized for mental illness in Northern Virginia,” said Stephan Stark, vice president of Virginia Development at ncgCARE, the parent company to National Counseling Group that operates CR2.

“The State of Virginia, public agencies, and the health and human services professionals who work with children and families, wanted to change that. They understood the Medicaid model for crisis response was helpful but could be improved. It was crisis oriented — but stability post-crisis is tenuous in mental health patients. Medicaid couldn’t offer follow up services. The ability to serve people outside the Medicaid cohort was also deemed very important. The state wanted to design something that would provide (mental) healthcare to children without them being hospitalized unnecessarily, in a more normal environment, and so they sent out a request for proposals (RFP): that’s how the CR2 units got started,” he said.

The Virginia Department of Behavioral Health and Developmental Services (DBHDS) had grant money, so they decided to focus on psychiatric crises in the hope of improving the way children with serious mental illness (SMI) are treated. The DBHDS requirements were strict: 30-day post-discharge care, all patients regardless of insurance, mobile crisis stabilization, and fully qualified master’s level or licensed counselors. National Counseling Group was awarded the $750,000 grant.

“The initial grant could only support two four-person teams of masters-level and licensed crisis counselors, psychiatric services, translation services, and outreach personnel. At the time, everyone involved, CR2, National Counseling Group, and DBHDS, all agreed this money would only go so far but that it was a good place to start,” said Stark.

“The biggest issue has been increasing need, because the grant is capped the money can only pay for so much — you get a few calls a day and suddenly you are strapped. This is not a 30-minute conversation with the patient; we spend a lot of time with each case,” Stark said.

CR2 Crisis Stabilization Counselor Aminata Conteh said, “The program for kids is for up to 45 days. Each client receives 30 days of post-discharge follow up after each crisis event is stabilized. The number of days that CR2 spends stabilizing clients prior to this may be between 1 and 15, depending on the individual’s needs and response to treatment. Although the stabilization period is intensive with the possibility of numerous hours of intervention, the 30-day follow-up period may entail a phone call or two a week. Depending on the needs of the client we may have to mobilize during this period, but the hours dedicated to each client during ‘follow-up’ is usually reduced greatly. The focus is on safety. We see kids with psychotic episodes, suicide ideation. We try to stabilize in the home, look for group therapy and family to help; if we can’t stabilize them in the home, we will recommend they go to the ER in the county in which they live.”

But the frustration of not being able to cover as many people as they would like is evident as Conteh said, “We have 12 staff to cover Loudoun, Arlington, Fairfax and Prince William counties and by the middle of the week we are already full. ”

“The solution to this problem will require a two-fold approach: an increase in funds, and to ensure that our programs are as efficient and effective as possible so that they can serve the greatest number of people given the available monies. The state is always looking at ways to better fund these programs, and it is our job to run these programs well.” said Stark.

Should Virginia Hospital Center help fund the CR2? “I can’t speak to how another provider can or should use their revenues,” Stark responded. “Would it be wonderful if VHC were able to help fund CR2? Yes. In the era of social responsibility, would it be great if other companies, organizations, or individuals contributed money to help stabilize children with mental illness? Yes. Corporate reputation is more and more important every year, so it would seem to make sense for large hospitals to engage in this kind of philanthropy. Many do in their own way, but crisis stabilization is certainly a worthwhile endeavor.”

According to Judy Deane, of the Arlington Community Services Board (CBS), “DBHDS reached out to VHC to obtain funding for expanding the number of CR2 clinicians: VHC said, this isn’t our mission, we don’t have a pediatric unit.”

VHC Vice President for Business Development and Community Relations Adrian Stanton has said, “More hospital beds for mentally ill children might not be the best solution.”

Stark agreed with Stanton. “That is absolutely true; however, hospital beds do have a place. Sometimes you need a secure environment; sometimes you have to keep kids safe outside of the home. But hospitalization is such a sterile environment. The only real solution has to be to address people's’ needs in the moment — in the places where they reside — work with them in their homes, their schools, their communities.”

Stark said the need for crisis response is huge. “Ever since the shootings at Virginia Tech, the State of Virginia has been looking closely at mental health crises. Concurrently, and because a disproportionate number of children have been hospitalized for years, DBHDS, the Children’s Service Administration (CSA), and other agencies that serve children and families, started focusing on crisis stabilization. They are slowly getting monies allocated towards this type of work but there is only so much money available. For CR2, Medicaid can help offset the cost to the grant but, unfortunately, it seldom does. The vast majority of our clients have commercial insurance, or no insurance, so the money gets spent fast.”

Commercial insurance is just learning about mobile stabilization services, Stark said. “They may not understand how it saves money and improves outcomes relative to hospitalization. National Counseling Group did talk to a large managed care organization in early 2018, and there was some interest in exploring coverage of the mobile services. Anthem, Blue Cross Blue Shield - Anthem is the first care organization as of January to look at home-based counseling services for some of their members. Their commercial side did a pilot of this last year, and as of January 2018 they started offering coverage of home-based counseling services. So NCG is hopeful the other companies will follow suit.

What does it cost to create a CR2 unit? Stark said, “$200,000 doesn’t buy much of a unit, but it would fund a few doctors or clinicians. This is due not only to the cost of the employees but to the cost of psychiatric services, administrative overhead, and education and outreach. We were just talking about this. How can we make this more affordable? A high-fidelity program is costly. But every additional dollar will help. To some extent this is a prevention model: not to let these problems fester and end up requiring a hospital stay.”

Stark said, “The biggest issue is the scope of response, because we have 12 people between our crisis units, and no one can work 24-hours a day, 7 days a week. We can only respond to 2-3 calls a day, but, at times, we get 15 calls. Yet, because we exist, we’ve been able to divert hospitalization for a vast majority of people. When we are able to mobilize, we are able to divert hospitalization approximately 90 percent of the time. Mobile units are cheaper and more efficient than ER visits.”

Stark agrees that more resources for mental health issues is important so that crisis response is not the only solution. “People don’t always understand what it is we do. They themselves don’t always understand what a mental health problem is or whether they have a crisis or not. People, because they don’t have insurance, just want help. Their family dynamic is falling apart and help is not readily available. Maybe CR2 can help them. We end up having to tell people, ‘That’s not exactly what we do .…’”

“Some things aren’t a crisis, per se. A crisis is that which puts the child at imminent risk of going to a hospital because of their psychiatric problem. Sometimes kids are just not doing what you ask, threatening to run away, and these parents can’t otherwise get help so they call CR2. We spend a lot of time giving them better resources for those issues. We don’t want to respond to false alarms; there are enough genuine crises out there. “

“We have a CARE center,” said Stark, “a call center with qualified mental health practitioners — they do the initial screenings for lethality, and either mobilize CR2 or help with referrals to emergency services when needed. We have our own little hotline, but if we had more money, enhancing a hotline might prove valuable. More mobilization staff, however, is always needed.”

“CR2 doesn’t get any federal money directly, but because of recent school shootings and the rising addiction and suicide rates, the issue of mental health is being thrust into the public arena and there is hope. Our hope is that more money will continue to be allocated for CR2 and like programs.,” said Stark.

Is the need getting worse? “There is no doubt that mental health issues are growing in our society. There has long been a need for crisis work. The CSA has been talking about the need for crisis response for 12 years. For over 10 years, service providers like NCG as well as the CSA were doing service needs assessments: all 120 localities talked about a need for crisis services. This is where the battle needs to be fought. While the general mental health issues need attention, what really matters is the most serious and most costly psychiatric crisis because it sets off the greatest interventions.”

For more information on the CR2, see: www.cr2crisis.com.