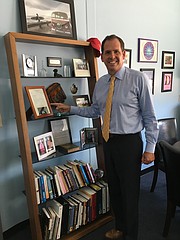 He’s an English major with a sense of history. He is also the new principal at Walt Whitman High School in Bethesda.

Robby Dodd took the job as principal this summer following the retirement of Alan Goodwin who led the school for the past 14 years.

Talking about Whitman’s former principals is where Dodd’s interest in history shows itself.

“The history of Whitman is fascinating to me, from a leadership perspective,” Dodd said. “I’m sitting at the desk of Jerome Marco, the second principal, he was here 30 years.”

And, Dodd added, he is only the fourth principal in Whitman’s history. The first was Daryl Shaw, who opened the school in 1962.

Then he pointed out that his office is “Whitman Blue,” “that’s what I call it” he said of the sky-blue walls adorned with memorabilia, including a picture of Whitman himself.

Dodd said he considers himself the consummate Montgomery County Public Schools company man. His father was an MCPS elementary school principal, then an associate superintendent.

With all his years with teachers — his father, his mother who taught for a while and his sister who is currently a kindergarten teacher — Dodd said his first thought was not to teach.

He tried it and went back to school to become certified to teach, and the rest is his own history.

Dodd has been a principal in both elementary and middle schools and, for the last three years, has trained principals.

As for this, his first time working in a high school, Dodd says he is confident in his ability to build relationships with high school students.

“Alan Goodwin got me in here from the get go,” he said. “I was here a half dozen times before I started.”

One piece of advice he got from Goodwin, Goodwin’s “Golden Rule” he said was: “When kids come to you with an idea, say yes. If they want it, they will find a way to make it happen.”

Dodd is also confident about his relationship with the community; during the summer had three Meet and Greets for the community. He also had high praise for Whitman’s faculty and staff.

“I have the feeling this is a high-performing, motivated staff,” he said. “The signs are good.”

“We have a fairly new administrative team,” he said, noting that two of the four assistant principals, Michelle Lipson and Phillip Yarborough, are new to the school.

He said the theme for the year is Honoring the Past and Teaching the Future.

One challenge he knows the school community has to face is student suicide.

“It is a recurring theme I’ve heard from staff and kids,” he said. “How can we help kids balance their education lives and personal interests. How can we address stress with mindfulness?”

He is also concerned with equity — making sure Whitman is inclusive and that students of color feel included and welcome. And achievement for all, though it has a top reputation, Whitman does have students at risk of falling between the cracks.

“The way to get the most out of kids is to have good teachers,” Dodd said. “It’s long been known that the teacher can really account for a significant part of achievement. I think we have a good staff that will really think about these things and focus [on them].”