‘The Kids Want To Be Here’ in Chantilly
Votes

‘The Kids Want To Be Here’ in Chantilly 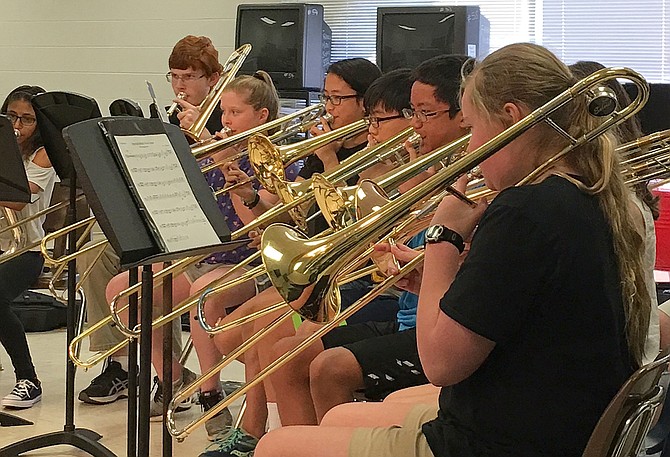 Trombone players from the concert and symphonic bands performing together. Photo by Bonnie Hobbs.

On cymbals and tambourine during a percussion sectional are (from left) Rocky Run Middle seventh-graders Eric French and Link Coleman.

For some three weeks this summer, those walking through the halls of Franklin Middle School were greeted with the sounds of music. That’s because, for its 33rd year, the school’s Band and Orchestra Camp was in full swing.

It ran from June 20 through July 13, with 52 teachers furthering and enhancing the music education of 602 students. And their four hours of intense practice every day gave the students greater opportunities to play their instruments than they’d receive during the regular school year.

“Sectional classes work on the music that the band or orchestra director is teaching,” said Walker. “Instrument classes focus on fundamentals like scales and tone quality and are like master classes of large-group, private lessons.”

Walker founded the camp and has helmed it from the start. For 30 years – 28 of them as Franklin’s band director – he taught music in FCPS. And when he retired in 2012, the school named its music wing after him.

As is usually the case, things went smoothly at camp this year. “With a camp this size, you’d think you might have discipline problems,” said Walker. “But the kids want to be here.”

Students were divided into beginning, cadet, concert and symphonic bands and orchestras, depending on their level of talent and expertise. In addition, there’s also a jazz band. Teaching the classes were FCPS, Prince William and Loudoun County band and orchestra directors, private music teachers, plus retired military-band members.

Besides that, said Walker, “We bring in professional musicians to perform. It helps the teachers and kids see and identify wonderful-sounding groups, such as the White House Band, comprised of former military personnel who’ve played at the White House. Others include Bridging the Gap, violin and bass players who are active-duty Marines and perform at all the White House teas.”

No surprise, he said, “I enjoy music education and working with students and musicians. And I have a passion for kids who never lose their purpose for being here and their respect for the camp – and that’s because of the homes they come from, where their families are supportive of their interest in music.”

“At camp, we have the opportunity to see their growth because their sectional teachers take the band or orchestra music they’re working on and rip it apart to focus on areas needing attention,” continued Walker. “I love leading this camp, and the educators here appreciate my skill managing people and running things. And the teachers in this community love it because they get advanced music students, right at the start of the school year.”

Attendees included Oak Hill Elementary sixth-grader Matthew Loga, in his second year playing cello. “I picked it because I thought the viola and violin were too high-pitched and uncomfortable to hold up to your neck,” he said. “And the bass is too big and hard to carry.”

At camp for the second time, he said, “Last time, it was fun and it helped me a lot. I get to practice more and get a lot better. I’d definitely recommend it because this camp is great, especially for beginners, because it helps you a lot and gets you ready for the school year.”

Hailey Khetan, a Rachel Carson eighth-grader, has played trumpet since fifth grade. Also in her second year of camp, she said, “Last time, it prepared me a lot for the coming school year because it taught me the chromatic scale in advance. This year, I learned new skills like double-tonguing and things they wouldn’t teach us in school. The camp’s good because, normally, kids don’t practice much during summer – so this forces you to do it.”

Joe Antonucci, Whitman Middle band director, taught there for his first time. “It’s been awesome,” he said. “Coming in as also a part-time, elementary band director, it’s crazy to see how much of a difference the consistency of this camp has on the kids’ abilities. I generally see kids once a week; but here, it’s for four hours a day.”

So, he explained, “The growth you see here is exponentially faster. And the students get more satisfaction out of it because they get to so quickly see the fruits of their labors. It’s been fun here, and I hope to come back – it’s a pretty good gig.”

Michelle Rupert, a 13-year FCPS elementary band director, agreed. “It’s my second, consecutive year at this camp, but I taught here 17 years ago when I was pregnant with my son,” she said. “He’s now here assisting the other directors and playing with the jazz band and wants to be a director, too. And my middle son is here helping, as well.”

At camp, said Rupert, elementary students get a month’s worth of instruction every day. “So by the time they return to school, they’re a year or two ahead of the other kids,” she said. “Here, they get four hours of music a day; during the school year, it’s four hours a month. So it’s amazing to hear their daily improvement.”

Furthermore, she said, “Here, in their master classes, they also get lessons on their specific instrument from a professional who plays that instrument. So they’re getting the correct fundamentals to help them, going forward. That way, there’s no having to fix things later on in class. They get exposed to different teachers and students from other schools and counties and will later see them at All-District band auditions. And that’s neat because we’re truly a team.”

Rocky Run Middle seventh-grader Aditya Rangi has played trumpet three years and likes it because “You can play high and low notes, and it has a wide range of beautiful notes.”

It was Aditya’s third year at camp and, he said, “The food is good and you learn a lot about your instrument. And scientific studies show that playing an instrument helps you be smarter. I’d recommend this camp to others because you improve your playing and it’s a great way to use your summer.”

Meanwhile, Oak Hill sixth-grader Sean Salas – who’s played clarinet for a year – came to camp for his first time to learn the bass clarinet. “I wanted to try something different, and I like this better because it’s a much cooler sound,” he said. “Before camp, I was having a hard time reaching the high notes with the register key, and now I can do it.”

Sean especially liked his clarinet sectional because “It really helped me get to those notes. I’d recommend the camp because it’s a great way to start a new instrument and they have a beginner band. And I learned more here than the whole year at school.”

Elise Obernberger, a Franklin seventh-grader, has played clarinet since fifth grade. “I like that it’s more difficult than the stringed instruments,” she said. “And because it’s nice and long, you can sit and play it without being in a weird position.” In her second year at camp, she said, “It was really fun; and last year, when I came back to school, I was a lot more experienced with the clarinet than some of the kids there and was better prepared for band class.”

Elise also liked her teachers and said they helped her a great deal. “I’ve learned some alternative fingerings for the high notes, and the teachers taught me to play faster, even with the more difficult fingers,” she said. “I’d recommend this camp because you make new friends, it’s really fun and you learn new things. And at the end, you get to show off your skills to all your friends and family in a concert.”