Density, Dollars, or Displacement in Alexandria? 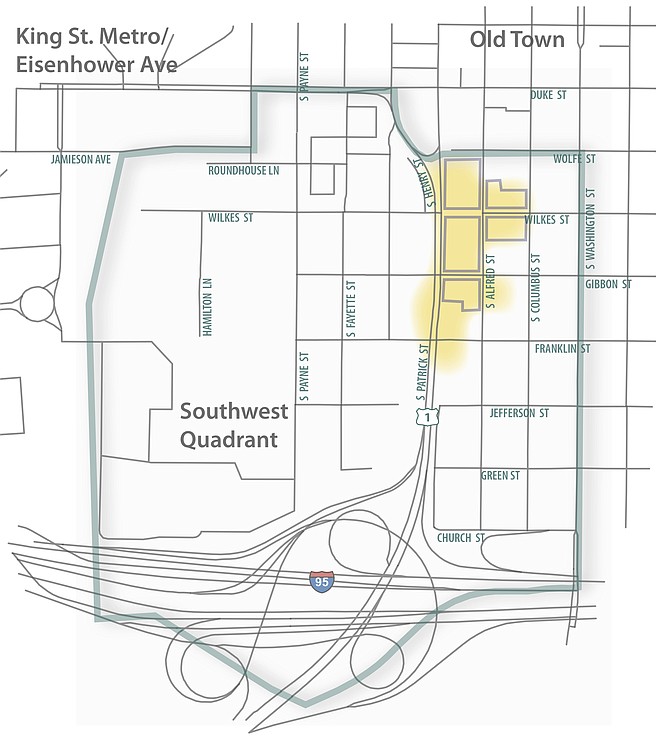 The Route 1 South Housing Affordability Strategy — now redubbed the South Patrick Street Housing Affordability Strategy — seeks to preserve 215 units of affordable housing in Old Town’s southwest quadrant neighborhood. Currently, they are affordable to lower-income households thanks to HUD subsidies. But the contracts for those subsidies start expiring next year, after which the owners could sell or redevelop their properties, likely into townhomes. If that happens, the affordable units “will be permanently lost,” causing “the displacement of the existing 215 households,” according to the housing plan.

To encourage the owners to replace the existing affordable housing in an economically viable way, the proposed strategy would allow for increased residential density. By allowing taller buildings with more units, the city would enable the owners to realize higher cash flows and property values, in trade for their commitment to replace housing affordability. While precise figures aren’t yet known, density would have to increase roughly by a factor of three.

At Tuesday’s public hearing before the Planning Commission, several residents voiced their concerns. While most said they support preserving affordable housing in principle, they don’t think the plan as proposed adequately addresses their concerns.

They are worried especially about traffic. One neighborhood resident said: “It is a thoroughfare. … I’m afraid to cross the street most of the time. That’s why I moved to the city, so I could walk. All day long, people run red lights, ignore traffic signs, etc.”

The city didn’t conduct a detailed traffic study, but instead will consider individual projects’ traffic ramifications through the development process, said city staff at the hearing.

Several residents expressed concern about what they perceive as insufficient public engagement in the plan’s development. They want the planning process, which began last winter, to slow down and incorporate a broader range of community voices.

A resident said: “We really respectfully ask that it not just be punted down to the DSUPs [development special use permits] for individual developments in the future. … This has just been pushed through.”

Another said: “We’re not opposed to affordable housing writ large. We want to have a commonsense approach to what we’re trying to accomplish here. I don’t want to the Planning Commission here to conduct a rubber-stamping action, without clearly understanding all the outstanding questions.”

Planning commissioners mostly dismissed these concerns, instead applauding city staff for planning proactively, ahead of the HUD contracts’ expirations.

To replace the existing affordable housing without increasing density, the city would have to invest as much as $98 million over the next 20 years, according to the plan.

“It’s pretty clear that that’s just completely implausible,” said Commissioner Stephen Koenig. “Yet [the proposed plan] ends up with a bottom line that’s manageable and ends up with the ability to maintain this affordability in this neighborhood. The key piece that makes that possible is the additional density. … Nobody has come up with a scenario that allows us to maintain … these units in place and not add additional density.”

“I think that this was an appropriately paced planning process, that these sorts of things shouldn’t be measured in years but in months,” said Commissioner Nathan Macek. “There is a regional traffic issue that this particular plan doesn’t change,” he added.

“Like any other good strategy, it’s subject to change,” said Commissioner David Brown. “We could come back and change this as circumstances dictate long before we’re through with 15 years,” which is the plan’s scope.

The public hearing before City Council will take place at City Hall on Saturday, Sept. 15, starting at 9:30 a.m. For more information, visit www.alexandriava.gov/Planning.