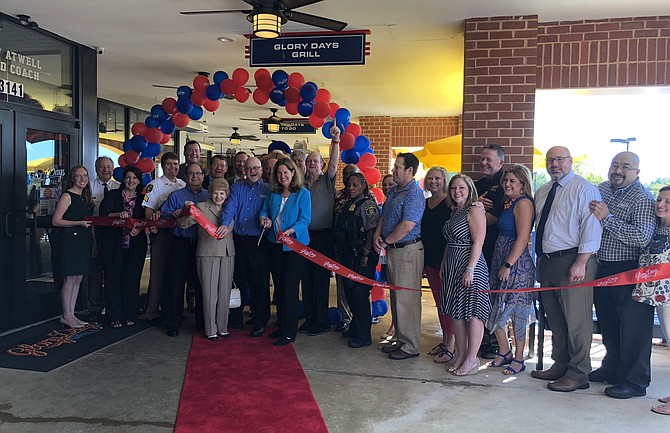 Mayor Allison Silberberg, center with scissors, leads a crowd of dignitaries and supporters in cutting the ribbon to officially open Glory Days Grill Sept. 6 in the Alexandria Commons Shopping Center on Duke Street. The location is the company’s 33rd and 15th in Virginia. Photo by Jeanne Theismann.

Tony Cochones, center, VP of Culinary Operations for Glory Days Grill and a long time Alexandria resident, poses for a photo with Sheriff Dana Lawhorne and Officer Bennie Evans Sept. 6 at the ribbon cutting for the Alexandria Commons restaurant.

“I’m excited for the Glory Days team to know what I have for the past 20 years — that Alexandria is a great community.” —Tony Cochones, Glory Days vice president of culinary operations and city resident

“I’m excited for the Glory Days team to know what I have for the past 20 years,” said Tony Cochones, vice president of culinary operations and a longtime resident of the city. “That Alexandria is a great community.”

Mayor Allison Silberberg led local dignitaries and supporters in the ribbon cutting ceremony that included several Glory Days Grill executives. Along with Cochones, co-founder Richard Danker and executive vice president Gary Cohen were among those welcoming the crowd to the restaurant.

“This is our 15th store in Virginia,” said Danker, who founded the restaurant in 1996 with Bob Garner and Jeff Newman with a location in Burke. “Here in Alexandria we have already provided more than 100 jobs.”

Glory Days Grill replaces the former Lone Star Steakhouse at 3141 Duke St. It has more than 6,700 square feet of bar, dining and banquet seating for 190 with additional outdoor seating.

“We’re here to stay,” Danker told the crowd. “We spent $2.4 million building out the old Lone Star Steakhouse and we have a 20-year lease. We plan to be here a long time.”

Glory Days Grill features more than 40 television screens throughout the restaurant. Individual volume controlled speakers at each table allow patrons to tune in to the screen of their choice, which show a variety of sporting events, news, entertainment and cartoons.

The Alexandria restaurant is open seven days a week from 11 a.m. to midnight (11 p.m. on Sundays). There are several daily specials and a late night “Snack Attack” menu is available after 9 p.m. Catering services are also available.

To help support local schools, sports teams and community organizations, Glory Days Grill has its “Cards For Causes” program that donates $5 of every $25 gift card sold to a chosen charity (with a minimum of 100 cards sold). More information on this and the restaurant’s Dining For Dollars program can be found online or by contacting the restaurant via email at alexandriacommons@glorydaysgrill.com.

“We’re here to support the community,” said Cohen. “That’s who we are and how we built this company.”