‘Future Guardians of Liberty’ in Alexandria 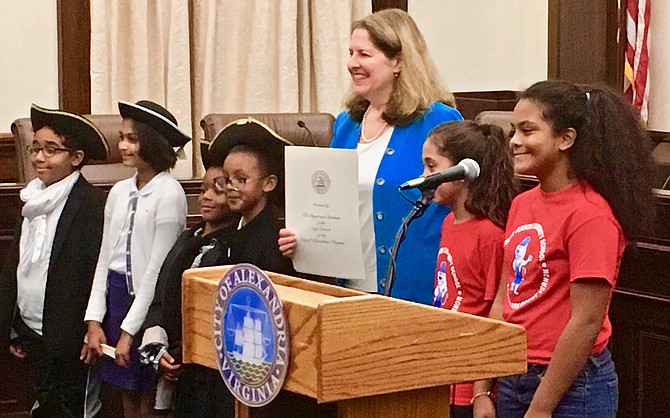 The date marked the 231st anniversary of the U.S. Constitution’s signing in 1787. Monday’s ceremony, held at city hall and sponsored by the Daughters of the American Revolution (DAR) commemorated the occasion.

“The Constitution of the United State is both our birth certificate, recognizing the creation of this unique nation, and the blueprint or rulebook by which we are governed,” said Linda Greenberg, a John Alexander Chapter member. She noted Virginians who “played a prominent role,” including George Washington, James Madison, John Blair and George Mason. “The primary object of our nation should be the education of our youth in the science of government. In a republic, what species of knowledge can be equally important? And what duty more pressing than communicating it to those who are to be the future guardians of the liberty of the country?” she said, quoting Washington.

Each student received a copy of the Constitution and Declaration of Independence.

“This is really about gratitude,” said Mayor Allison Silberberg. “We cannot take [freedom] for granted. That is something that we have to continue to protect in an ongoing manner, every generation. …I had the honor of witnessing the oath of allegiance taken by our newest Americans on Citizenship Day, just a few days ago, and it was very moving. That is really what our country is also about, as we are accepting and embracing to all.”