Working with children around the world. 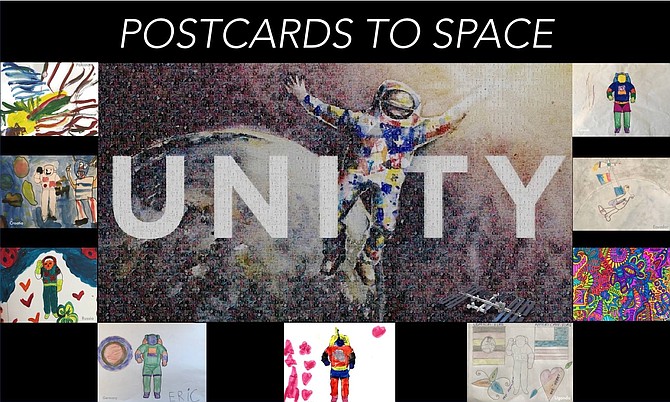 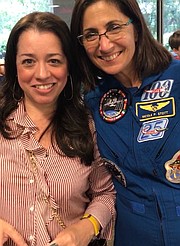 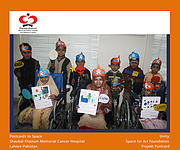 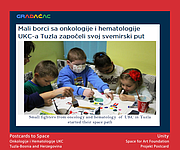 Retired astronaut Nicole Stott‘s small step from the moving sidewalk at Dulles Airport became a “giant leap” for more than 1,000 children from around the world, whose artwork has now traveled all the way to the International Space Station (ISS).

As she exited the moving sidewalk, Stott was immediately struck by the magnificence of “One World” — an art installation consisting of photos and postcards from children around the world, which at the time was hanging in Concourse C at Dulles Airport.

“Projekt Postcard” and the “One World” exhibit is the brainstorm of Potomac artist Maria Lanas (Loli) whose commitment to establishing an international cultural art exchange between schoolchildren in the U.S., Bosnia, Croatia, Uganda, and Ecuador resulted in the eye-catching artwork.

“The project started as an exchange of art and communication for kids — a way for kids to learn about one another through art,” Lanas said. “However, once the artistic postcards were exchanged, the teachers were able to implement the postcards and drawings into their instructional programs. The class studies about a small town in Ecuador, Uganda, Croatia or another country and then the kids learn personally from their new acquaintance what they eat, where they live, what they study in their schools and how their lives are uniquely different from their own. The kids also have a chance to meet one another and see each other’s classrooms through a class Skype session.”

Lanas emphasized that many of the children in the different countries have never had a chance to learn art because it is not a valued part of their curriculum.

“Classroom teachers from other countries truly embraced the program and were blown away by how excited the kids were to express themselves through art,” she said. “The program is so beneficial in so many ways — the cultural connection, the artistic expression and international connection that is formed through just one project. It’s sort of like the pen pal program that many of us participated in as children.”

“This art display stopped me in my tracks,” said Stott. “I could not believe how the colors, designs and patterning were so much like the art we were seeing from the children in pediatric cancer centers around the world who were participating in our Spacesuit Art Project. I was struck with the sense of oneness — and realized that I needed to get in touch with Loli. I posted pictures of the Projekt Postcard artwork on my social media, and from there Loli and I connected and we immediately discovered that we are both artists with the same goal — to encourage children to experience the creative experiences of art and to give them an opportunity to connect with one another through their art. I really felt like our meeting was simply divine providence.”

Known as “The Artistic Astronaut,” Stott is a veteran astronaut who painted the first watercolor in space. She has flown on two spaceflights and spent 104 days living and working in space on both the International Space Station (ISS) and the Space Shuttle. She is also a NASA Aquanaut who, in preparation for space flight and along with her NEEMO9 crew, lived and worked during an 18-day saturation mission, the longest to date on the Aquarius undersea habitat. Now retired from NASA, Stott “combines her artwork and spaceflight experience to inspire creative thinking about solutions to our planetary challenges, to raise awareness of the surprising interplay between science and art, and to promote the amazing work being done every day in space to improve life right here on Earth.”

With these goals in mind, and as a way to continue the work that had begun through the Spacesuit Art Project, Stott created the “Space for Art Foundation.” The Spacesuit Art Project began in partnership with artist Ian Cion and his Arts in Medicine Program at the University of Texas MD Anderson Children’s Cancer Hospital in Houston, Texas; ILC Dover, the contractor who makes NASA spacesuits; and the ISS Communications Team at the NASA Johnson Space Center.

Children undergoing pediatric cancer treatment created individual pieces of artwork that were then quilted together into spacesuits by the talented team at ILC Dover. What started with the children at one hospital in Houston, Texas, grew to something much bigger than that one hospital, with children from hospitals in five countries painting together with a message of hope, courage, and unity.

“The Space for Art Foundation is aimed at expanding the mission of the Spacesuit Art Project by developing, implementing and facilitating more space-inspired art therapy programs, exhibits, and research. At the center of it all is the demonstration of the healing power of art,” said Stott. “These projects are inspired by the wonders of space exploration and provide children from all over the world with the opportunity to creatively imagine a positive and healthy future for themselves and all of the other children they share our beautiful planet with.”

Together Stott and Lanas have initiated a project called “Postcards to Space.” Children’s art on postcards was collected and displayed in an electronic art piece that was projected inside the ISS. Lanas said, “This project involves over 1,000 kids from nine countries, 20 hospitals, and 10 schools from around the world. Our hope is that they will all have the opportunity of seeing their art — and hearing their stories being shown to the astronauts in the ISS.”

Knowing that more than 1,000 postcards would be far too many to physically send to space, they decided that the artwork and stories behind it should be made into a video. Through Instagram, Lanas connected with A-BLOK Interactive Experiences, a company from Cologne, Germany (coincidentally the same city where the European Astronaut Training Center is located). A-BLOK volunteered their services to create a compiled electronic art piece from all of the children’s artwork. Lanas also made the acquaintance of musician Alex Alvear, who has created the original soundtrack for the video. Both A-BLOK and Alex Alvear are now part of the “Postcards to Space” team. The video was delivered to the ISS for the crew to see and be filmed watching it, so the children will also be able to watch the reactions and enjoyment of the astronauts. Then each child will receive a copy of the video, for a memory of their artwork in space.

“A-BLOK completed the beautiful compilation of the video and we have received it back from ISS in time to release it as part of the UNICEF World Children’s Day on Nov. 20, 2018. It’s a very cool way to kick it off,” said Lanas. “Leading up to the November release, we will start to post the children’s art work through our social media — and to begin telling the children’s ‘Postcards to Space’ story.”

Both Stott and Lanas are feeling overwhelmingly happy with the way everything has fallen into place. Stott said,” I feel like all the things I have done before through my NASA and spaceflight career are coming to fruition through the Space for Art Foundation and projects like Spacesuit Art and Postcards to Space. I’ve had incredible experiences in my life and I believe they have all put me in a position to support these space-inspired art programs for kids. The children are a major source of inspiration for me, and it’s so cool to see how much they appreciate the opportunity to participate in something that’s bigger than just them. They’re excited that something they’ve done might go to space, but I think they’re more excited about meeting and being part of something with other kids from around the world. They were also able to look beyond the confines of the hospital room and their treatment or their classroom and start to talk about and focus on their futures. These art projects give all of them a voice.”

Lanas said, “This has been such a cool project because we are opening up children’s lives. They learn they live on the huge planet where there are other kids — and that communication with other kids truly makes a difference. It’s so important that they understand there is a big wide world out there for them to see and to learn about.”

Similar to the partnerships of the International Space Station program, the international relationships developed through the Space for Art projects have also resulted in many benefits being realized already – more funding for some of the participating pediatric hospitals, art programs added to elementary school curriculums and hospital therapy programs, children in hospitals and schools benefiting from intercultural programs – and more to come.

To learn more or to donate to this program, which runs on “bare-bones” as both Stott and Lanas describe it, check it out and follow along with their journey at: