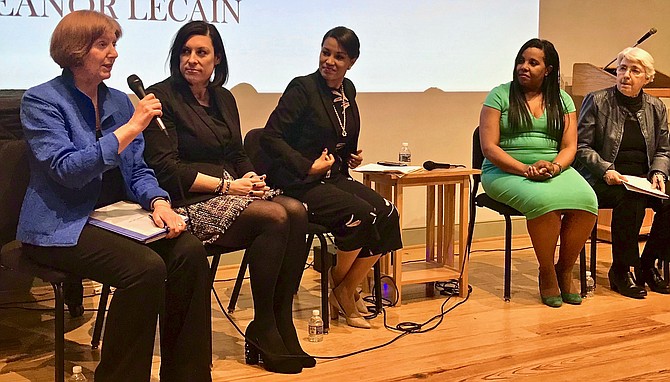 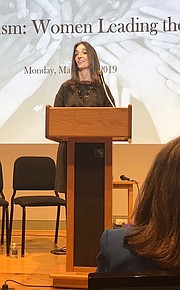 Virginia House Democratic leader Del. Eileen Filler-Corn (D-41) addresses the audience at the forum Civic Activism: Women Leading the Way presented by the Commission for Women and the Friends of the Commission March 25 at the Lyceum.

The panel, hosted on Monday, March 25 by the Alexandria Commission for Women, included female politicians and businesswomen who shared their leadership experiences and perspectives. The City Council-appointed commission advises city government on how public decisions uniquely affect women.

“More women than ever were elected to the Virginia General Assembly” in 2017, according to the commission’s 2018 Status of Women Report, from which Monday’s panel stemmed.

Yet panelists articulated many obstacles they believe women continue to face, including childcare inaccessibility; budgeting that doesn’t balance gender interests; inequitable access to campaign funding and other resources; and the unratified federal Equal Rights Amendment.

“Access to reliable, quality childcare” enables women to “serve on a board or commission, … run for office, … engage,” said panelist Eleanor LeCain, a consultant, author and radio personality.

LeCain also recommended “gender budgeting,” an approach used by Iceland and European countries to create budgets and policies with women’s experiences in mind. She’s unaware of any U.S. municipality employing such an approach “systemwide.”

“Policies that don’t distinguish between women and men are usually not neutral, and can perpetuate inequalities,” she said. She thinks gender budgeting wouldn’t necessarily recommend increased expenditure, but rather analysis and restructuring of a city’s current budget.

The commission asked City Manager Mark Jinks in October, among other things, to “apply a gender lens to all city decision-making;” make “no further cuts to city programs and services significantly impacting women;” “designate one staff member dedicated to women’s issues.”

“I would submit that the gender lens you are requesting is inherent in the senior leadership of the city,” said Jinks in a March response. “Our [three] deputy city managers are all women and almost the totality of the government is under their purview.”

Income disparities between genders — and thus perhaps also their potential-donor social circles — may limit women’s campaign fundraising capacity. Alexandria women, on average, earn 85 cents on the dollar compared to men, according to the commission’s report.

“Virginia has not passed a public financing law, so there is not much we can do [legislatively] at the local level to change the process of running for office,” said Bennett-Parker. She looks to organizations “that help recruit, train and fund diverse female candidates.”

The Equal Rights Amendment (ERA) would elevate gender as a constitutional category against which discrimination is prohibited. Many Virginia Democrats hope Virginia could become the 38th and final state necessary for ratification. But the issue is partisan-charged, and Republicans control both statehouse chambers by bare majorities. In the recent 2019 General Assembly, the senate (including a few Republicans) approved ratification, but a house committee killed it along party lines.

Martello says the commission is nonpartisan — though panelist Eleanor Smeal, who leads the Feminist Majority Foundation, expressed a desire that Democrats “flip the house and the senate” in this year’s upcoming election. Filler-Corn also alluded to the election, toward ERA approval.

However, the ERA illustrates that all women aren’t of the same political mind.

The Alexandria Republican Women’s Club is “very concerned about unintended consequences of the ERA,” said club vice president Linda App. “I get the impression that all of the speakers at the event were Democrats and lean liberal. … We would have enjoyed participating and providing a conservative point of view. … Young people, in particular, need to hear both sides of the issues as they form their political opinions and affiliations.”

Some opponents worry the ERA could loosen restrictions on taxpayer-funded abortions. For example, in 1998 the New Mexico Supreme Court, based on the the state’s ERA, expanded the definition of “medically necessary” abortions eligible for state funds. In addition to those threatening the mother’s life or arising from rape or incest, pregnancies exacerbating preexisting conditions, having “a profound negative impact” on mental health, and others became qualified.