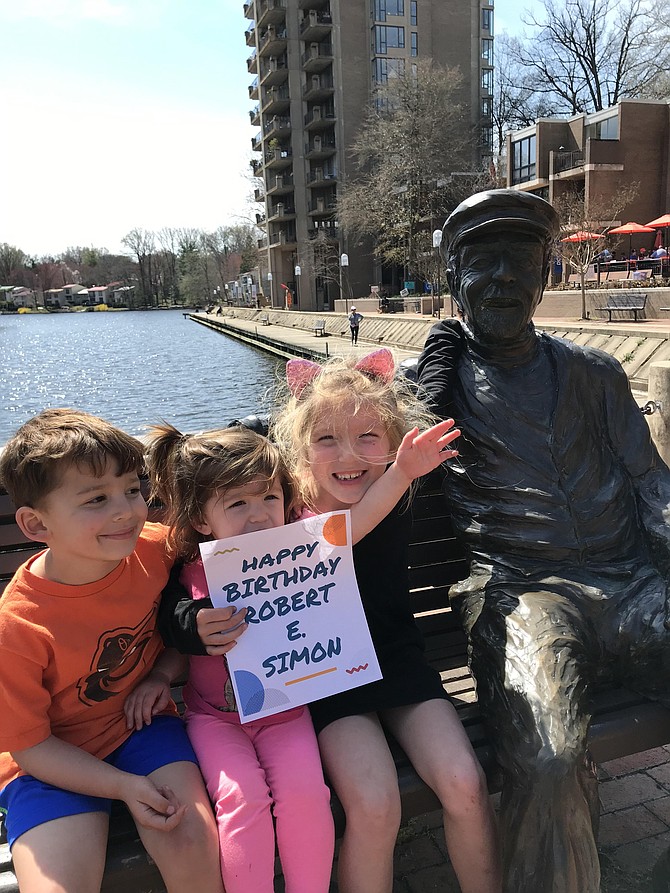 The Kooy children, Grant, 4, Eve, 2, and Ashton, 6, hold up a birthday wish sign for Reston's founder, Robert E. Simon, to celebrate 2019 Founder's Day. Melissa Romano, the owner of Lake Anne Brew House and Nordic Knot on the Plaza, made the birthday greeting sign for the special occasion. Photo by Mercia Hobson. 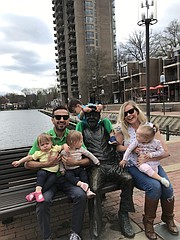 The Ayubi family of Reston, Jacob and wife Meghan with their four children, Benji, 5 and triplets Olivia, Madelyn and Harper, 20 months, enjoy a quiet moment with Bob Simon during the weekend of the 2019 Founder’s Day Celebration presented by Reston Historic Trust and Museum and hosted by Lake Anne Plaza. 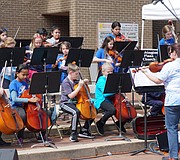 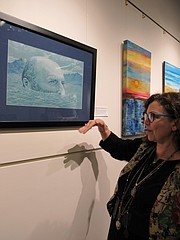 In the work by Mark Mandolia, the head of Robert E. Simon emerges from the waters. "The clay of our town has many footprints, and is not the work of any one person," writes Mandolia in his statement for the exhibit by League of Reston Artists on display in the Jo Ann Rose Gallery, Lake Anne to coordinate with the 2019 Founder's Day Celebration.

The celebration opened with a Commemorative Brick dedication and remarks by Chuck Veatch, Board Representative, Reston Historic Trust followed by remarks by local dignitaries. The day's activities, event location, and the population who attended the Founder's Day festivities mirrored many of Simon's guiding principles upon which he founded the "new town" in 1961 bearing his initials, "RESton."

Simon committed to incorporate seven principles in his community. One was an emphasis on leisure and practical living. Simon stressed that "cultural and recreational facilities be made available from the outset of development rather than later on." In line, Founder's Day showcased musical, visual and literary events provided by local professional and youth groups against a waterfront backdrop of recreational fun for all.

Remote control model sailboats skirted the lake waters. Children jumped on a moon bounce and played "Bob Simon Says" at the fountain. Volunteers led an hour-long guided walking tour of public art on the plaza. In the Jo Ann Rose gallery, authors Nadine James, Natasha Peterson and others taught participants how to create a memoir a family would treasure and local artist Marco Rando discussed his artwork and how Reston influenced his work.

The exhibit, Fine Lines, by League of Reston artists graced the gallery walls. Artist Mark Mandolia created the head of Robert E. Simon emerging from the waters. "The clay of our town has many footprints, and is not the work of any one person," wrote Mandolia in his statement for the piece on display by League of Reston Artists during the celebration.

Melissa Romano is the owner of Lake Anne Brew House and Nordic Knots. “We love being part of the Lake Anne community and celebrating the history that surrounds Founder's Day and Lake Anne," she said.

Tia Tuffour, 8, of Reston visited the plaza with family and friends. She commented on the natural beauty of Reston, another guiding principle Simon took to heart. "I take walks with my school on the trails. I love how the native flowers bloom in Reston," she said.

Simon committed to a mixed-use plan with a variety of housing so that residents could live in the same community throughout various stages of their life. "I think a lot of people who grew up here tend to stay close by and start families of their own in Reston,” said Meghan Ayubi of Reston. "One of the things I love the most is that this area has the strongest sense of community," she said. Ayubi and her husband Jacob looked down at their four young children, Benji, 5, and 20-month-old triplets, Olivia, Madelyn and Harper.

Simon also believed diversity needed to be a key and integral part of Reston’s culture and planning. Jacob said, "I've lived in Reston since I was in first grade in 1981. I never knew as an Afghan immigrant and a Muslim there was racism in the world."